What's The Most Popular Cat Breed?

What's the most popular cat breed?

This is a frequently asked question. And a good question it is!

The answer depends what source you use, and what locations you're talking about. Let's dig in...

The Cat Fanciers' Association (CFA) tracks registrations by breed for those it recognizes (CFA list of cat breeds).

If you consider them breeds, the Domestic Shorthair and the Domestic Longhair (including medium haired cats as longhairs here) make up the majority of house cats in the population world wide.

These classifications, however, are currently not recognized by the CFA as breeds for registration and competition. There is no official registry that I know of for non-pedigreed cats.

But, if you have a mixed breed/random bred cat and are interested in showing it, the CFA Household Pet Class is for you. Cats in this class are not of any particular breed.

All ages and colors of either sex are allowed in the Household Pet Class, long haired or short haired, and there is no written standard. There are some requirements though... cats cannot be declawed, and cats over eight months of age must be spayed or neutered.

Each cat is judged for uniqueness, markings, and personality. Each pet gets a Merit award, and the best are placed in a final. 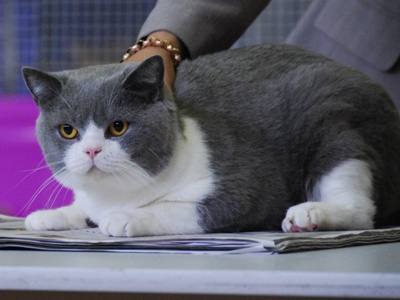 Other governing bodies of the Cat Fancy, however, may recognize different cat breeds around the world.

Over the years, there have been several contenders for the title of most popular cat breed. This honor obviously will vary based on which locations you're talking about, and what time frames.

In fact, in 2008, British Shorthair registrations with the GCCF were almost double that of the Siamese cat, the second most popular cat breed. Rounding out the GCCF top 5 for '08 were the Bengal, Burmese, and Persian cat breeds.

In '09, the Ragdoll and Maine Coon cat (both highly favored in the US) moved into third and fourth place in Britain. Despite declining registrations, the British Shorthairs and the Siamese held their number one and number two spots, respectively.

But, this was not always the case, and the Siamese was the number one cat in the GCCF until 1999, when British Shorthair registrations overtook them.

Are The Most Popular Cat Breeds Rare?

Is the most popular cat breed actually one of the rarest cats?

Keep in mind, though, that only a relatively small percentage of cats are purebred, and even fewer are pedigreed. A pedigreed cat has the papers to show its lineage and can be registered to prove their purebred status).

The total number of registered cats in the GCCF for 2008 is just over 30,000. Still a small amount compared to 7 million.

In a report published in Fanc-e-Mews in January of 2005, Joan Miller, the CFA Legislative Liaison, says that studies showed that only 3 to 6 percent of "all the household pet cats in the United States are pedigreed."

I've seen other data that would support those numbers, with the highest estimates being 10 percent.

That article shows some interesting 2003 CFA figures. Only 81 Korat kittens and 289 Turkish Angora kittens were reported. In addition, although it was the fifth most popular breed in the CFA, only 2,839 Abyssinian cats were recorded in 2003.

Even though these are 2003 figures, it's clear that a relatively small percentage of total cats are purebred domestic felines. Because of this, a particular cat breed can actually be on a popular breed list, but end up being a relatively rare animal.

The Most Popular Cats

Below are some basics on the most popular cats, as well as some lists of popular breeds (or links to lists) from around the world (from various sources).

It seems like over and over again, several breeds (or variations) show up in the "most popular" lists. Most often seen in the top 20 are Persian, Maine Coon, Siamese, and Himalayan. The Himalayan cat is a division of the Persian under CFA rules.

Often you'll see some variety of Shorthair, and the Sphynx (the no hair!) as well. Sometimes, depending upon how the list is compiled, you'll see Bengal in the top 20.

Bengals are hybrid cats, a mix between domestic and wild cats (Asian leopard cats, in this case). The CFA doesn't recognize Bengals, but TICA (The International Cat Association) and other organizations do.

Interestingly, although these may be among the most popular cat breeds, the general public likely doesn't recognize most of them by sight.

A Persian or a Siamese might be easy to spot. The Sphynx was made famous by Dr. Evil's cat, "Mr. Bigglesworth" in the James bond type spoof films, the Austin Powers movies.

But how about a Birman? How many people on the street would know a Tonk from a Siamese, or a Russian Blue from a gray colored British Shorthair? 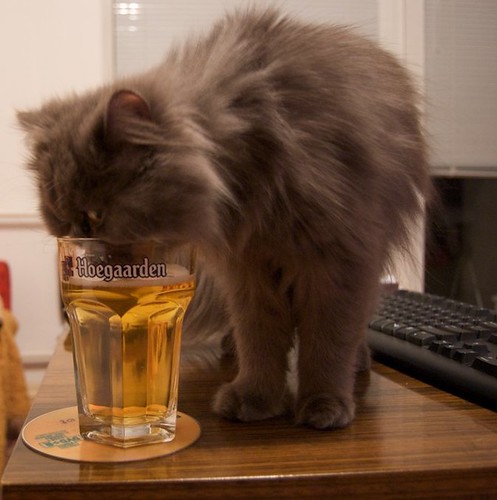 Since 1871, Persian cats have been the most popular cat breed. That's according to the American Humane Association, an organization dedicated to protecting both children and animals.

The CFA regularly reports these cats as having the most registrations in CFA each year. The fluffy Persian might be a bit of a grooming challenge (they need daily grooming so their fur does not mat), but they are a huge fan favorite.

In the book, Encyclopedia of the Cat, by Angela Sayer and Howard Loxton, we're told that when Persians first appeared at British cat shows, they "seemed to be bad-tempered, even savage, compared with shorthaired cats." This is in contrast to the Persian cat of today, which is considered very gentle. 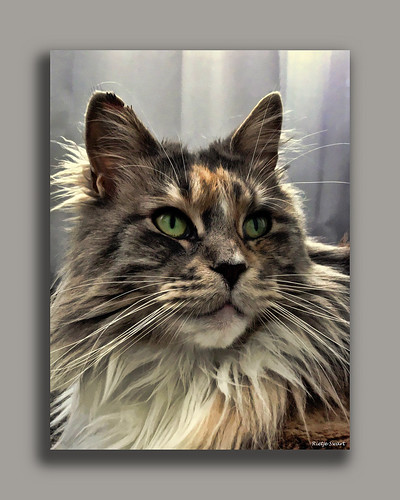 The winner (Best in Show) of the very first North American bench cat show held in the US in 1895 was a Maine Coon named Cosey.

This is the official State Cat of Maine. They're known for being excellent mousers, and they're one of the largest domestic cat breeds.

Large, but friendly, they make excellent pets, and Maine Coon fans are very loyal to this breed. As I've mentioned in interesting cat facts the world record for longest cat belongs to this breed. 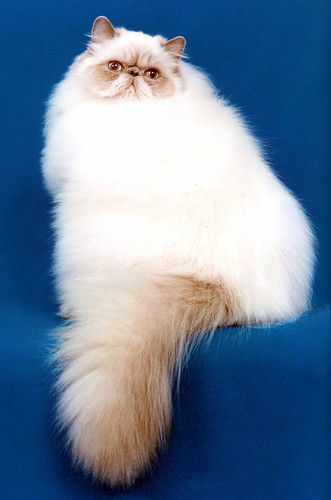 A Persian by any other name? Himalayan cats are sometimes cited as being the most popular domestic cat breed.

The Himalayan cat breed (as it is today) is essentially a cat with Persian characteristics, specific coat colors. The breed began by mixing Persians with the Siamese (where they got their blue eyes too).

The result of many years of breeding and changes in registration rules gives us the Himalayan of today... a Colorpoint Persian. So, the Himalayan is a fluffy feline with Persian characteristics and the Colorpoint coat and blue eyes of the Siamese.

The CFA treats these colorful kitties as Himalayan-Persians and not a separate breed by themselves. So, adding together the Himalayan and Persian population (as in the CFA registration and classification), you've got some strong numbers there. 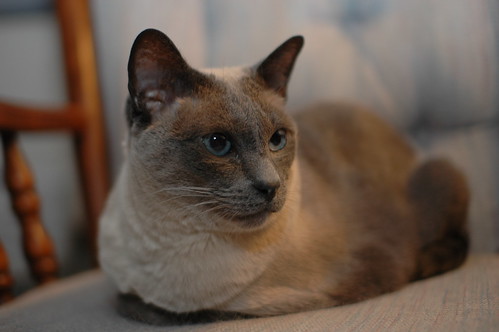 The Siamese is considered one of the oldest domesticated cat breeds and highly prized in ancient Siam, now Thailand. Many other popular cat breeds have Siamese blood in them.

Siamese are very popular in the US, and made famous years ago by Disney films, such as Lady and the Tramp, The Aristocats, and That Darn Cat.

Several Siamese have had Presidential clout, and lived in the White House, with the first being Siam. Siam was the very first Siamese cat known to arrive in the US (PDF opens in a new window/tab).

It was 1878, and Rutherford B. Hayes was President of the United States. Siam was well liked in the White House, and she was given the run of the place.

Unfortunately, Siam became ill in 1879, and passed away, despite receiving care from the President's personal physician at his home.

Bucky Katt of Get Fuzzy is a cartoon Siamese with lots of fans as well (more on cartoon cats).

You can view the complete lists below at the cat breed list page.

According to the popular cat website, Catster.com, the most popular cat breed is the American Shorthair.

The top cat according to the CFA list is the Persian, followed up by the Exotic and the Maine Coon.

British Shorthair, Siamese, and Bengal (Ragdoll as of 2009 data) top the most popular cat breed list for the GCCF.

What is the world's largest breed of domestic cat?