Is the Luxuriously Coated Persian Cat For You?

The Persian cat is easily recognized. Both its pushed in nose, and its thick, long coat give it a distinctive look. Cat fanciers also know this cat by its quiet, gentle, and loving nature.

Have you seen the beautiful white Persian cat on the Fancy Feast commercials on TV?

The distinctive face and long coat of this cat are familiar characteristics to most cat lovers.

The big eyes and down-turned mouth tend to give Persians a "grumpy" look to their faces, but that does not at all describe these fascinating cats.

This striking cat breed with the luxurious coat has been popular since shortly after it was developed in the eighteen hundreds. Even hundreds of years before then, though, longhairs were being cultivated in and around Turkey and Iran (formerly Persia) as far back as as the fourteen hundreds.

In fact, for some time, the Turkish Angora was bred with Persian cats to improve their coats. Actually, there was a time when the term "Angora" was used to denote almost any longhaired cat.

The Cat Fancier's Association tells us that to cloud the history of the Persian cat even further, there is hieroglyphic evidence indicating much earlier beginnings, as far back as 1684 B.C.!

They also tell us, although other sources disagree, that the Persian is the most popular cat breed (other sources claim it's currently the Maine Coon, and in previous years, the title belonged to the Siamese).

If you choose to bring home a Persian, be prepared. Caring for the lush coat of the Persian breed can be a bit of a job. These cats are certainly not the best cat breed choice for someone with little time to groom them. 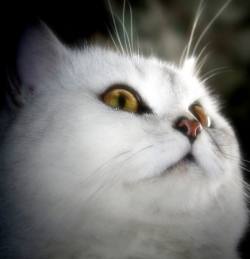 The Persian cat is probably most well known for its distinctive looking face. This breed has very small and rounded ears, and large, round eyes.

With eyes that are set far apart, and a short nose, this cat's face has a pushed in appearance.

They have a large (broad but short) muscular body with a short neck and stocky legs. A short, and as you can imagine, bushy tail complete the cat's distinctive look. Persians weigh around eight to fifteen pounds.

Persian cats are as well known for their long, thick, flowing coats as their pushed in face. A well groomed Persian cat is truly a stunning sight.

Hair flows gracefully all around her body, making it look as though she is in motion while sitting still. And sit still they do... often, an armrest or a windowsill will be a platform for this piece of artwork to present itself on!

As with many longhairs, if the cat has not been properly groomed, she can look quite the wreck!

Persian cats have a coat that tangles and becomes matted rather easily. This can become a health issue, so you should be prepared to groom your cat once a day to keep her coat in top shape.

Some would recommend the occasional bath as well, using a shampoo designed for cats. Only bathe your Persian after you've given her hair a thorough combing to remove the tangles. It is recommended that you accustom your cat to the bathing process early on in her life. Most cats, however, do not need a bath.

Cats that do develop bad tangles may have to be clipped, sometimes all the way down to the skin. This is very stressful for the cat, and she may have to be sedated for the procedure.

In addition, cats protect their skin and regulate their temperature with their hair. Clipping your Persian will make her more susceptible to exposure to both cold weather and the sun.

We're all used to seeing the white version of these cats as they have been the favorite of artists, photographers, and advertisers for years. You may be surprised to learn that the Persian's beautiful coat also commonly comes in Black, Chocolate, Red, Blue, Cream, Chinchilla, Lilac, and Silver.

If you don't enjoy the antics of an overly active or talkative cat, such as the Siamese, then the Persian might be an excellent choice. This breed is relatively quiet, and is much calmer than most other cat breeds. They are not usually fond of high climbing, as they typically like to have their feet firmly planted.

These little fur factories are laid back cats, but as the video above shows, they are playful as well. That combination makes them a good choice within multiple cat homes. Since they rarely pick fights with other animals, they can be a good choice for homes with dogs as well.

If, for whatever reason, your Persian doesn't like one of her housemates, she will more than likely just choose to have minimal contact with that pet.

The Persian's calm temperament, of course, also makes it a good family pet. These cats are fairly tolerant of young children. Of course, any animal that is mistreated by a child or an adult is going to have issues. At best, a mistreated animal is maladjusted, and at worst, down right neurotic.

Even though Persians are quiet and calm, they are also surprisingly interactive in the way that they respond to their owners and their families.

As with all breeds, there can be some cat health problems with these fluff balls. For the most part, however, Persians are a fairly healthy cat bread, living as long as 15 or 20 years.

Today's advanced screening practices used by conscientious breeders have all but eliminated many hereditary conditions.

Historically there are, however, a few serious breed specific problems of which you'll want to be aware. First, that distinctive looking compacted face tends to lead to breathing problems.

They also may have problems with their reproductive systems, and kidney disease, as well. In extreme cases, the very flat face of the Persian cat may create some problems chewing certain types of kibble.

In addition, there is a link between blue eyed white cats and deafness. Not all blue-eyed white cats are deaf, as it depends upon the specifics of the genetics. White Persians with blue eyes may suffer from this condition.

Speaking of eyes, those big eyes accumulate tears, and the flat face may cause the tears to run down the face. A daily face wash is recommended.

It should be noted that there are many variations on the look of these cats. Some cat lovers have raised concerns about those that are flat-faced in the extreme to the point of being unhealthy.

The high maintenance long coat and gentle nature of the Persian cat means that keeping this cat indoors is a must.

Perhaps you imagine that your perfect cat's favorite pass time should be taking a nap on a windowsill or a bed. Perhaps also you imagine that she will delight you with attention and loving looks from her big eyes. If this is true, then your household may be just right for a quiet and gentle Persian cat. Maybe two?!

If daily grooming and potential matting problems have you worried, take a look at the Persian's short haired cousin, the Exotic cat!