Interested in the Large and Legendary Norwegian Forest Cat?

The thick coated Norwegian Forest Cat originated in chilly Norway during the early nineteen hundreds. Long before that, though, its ancestors accompanied the Vikings as they sailed around the world.

These cats had a more important purpose than just keeping their explorer companions company... rodent control. This may have been the cat referred to in Norse myths that was so large, not even Thor could lift it. 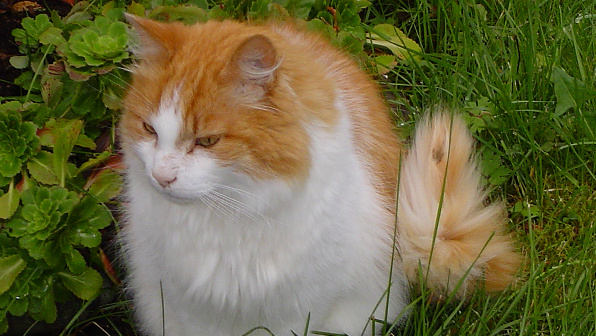 The Norwegian's exceptional hunting ability enabled it to keep the Viking food supply mouse free during long voyages at sea and at home in the village.

These big cats are often thought to be unfriendly and aloof by strangers, but are actually quite loving and affectionate with family members. As with all cats, every cat is an individual, and there are plenty of Weegies that love attention.

Check out this video of Puss Puss, an 18 month old Norwegian Forest Cat...

It's not until about 1:10 or so in the video, where Puss Puss is on the counter top, that you get an idea of how big this cat is. Considering that big breeds, such as the Maine Coon, Siberian, and Norwegian don't reach full size until 3 or 4 years, old that's going to be a very big kitty.

Norwegian Forest Cats are solidly built, with big bodies and long, powerful legs. Many cat fanciers say the Norwegian reminds them of the Lynx, a wild cat with a similar appearance.

This breed's graceful, furry tail is as long as its body and covered in long hair that gives it a graceful appearance. The head of this cat is triangular and its brilliant green eyes have a slight slant. Overall, the breed looks very alert, instead of having a traditional placid appearance.

Forest Cats come in a wide range of colors, including white and black. You can find the Norwegian in self, tortoiseshell, smoke, tipped, tabby, and silver tabby patterns.

On a personal note, I absolutely love the look of this cat - they are beautiful animals. There are, as with many cat breeds, myths surrounding their origin and history as well. Fairy tales tell of a fairy cat, and Norse mythology refers to a cat so large that not even the great god Thor could lift it.

There is some speculation that another forest cat, the very large Maine Coon cat of North America, is descended from these Scandinavian beauties. They do look quite alike, these two breeds, and it's easy to mistake one for the other. The Norwegian actually has thicker fur, and tends to be a bit smaller (although both cats are large).

While the Norwegian's thick, long coat looks beautiful, you should be prepared to do a bit of grooming to keep it that way. You will have to brush this cat's coat out once a week or your cat may end up with a matted and tangled coat that will have to be shaved off. Since clipping a cat can be quite stressful for her, try to keep her coat free of tangles.

If you are looking for a playful, active cat, that loves strangers, then the Norwegian Forest Cat may not be the breed for you. These cats are fairly quiet and dignified and some of them tend to be very reserved with people they do not know well, although they will happily unbend to romp with their favorite people.

They do tend to adore people, though, so a properly socialized cat can be quite outgoing. As always, when choosing your cat let the cat pick you. The social one that comes looking for you will be the one to take home. 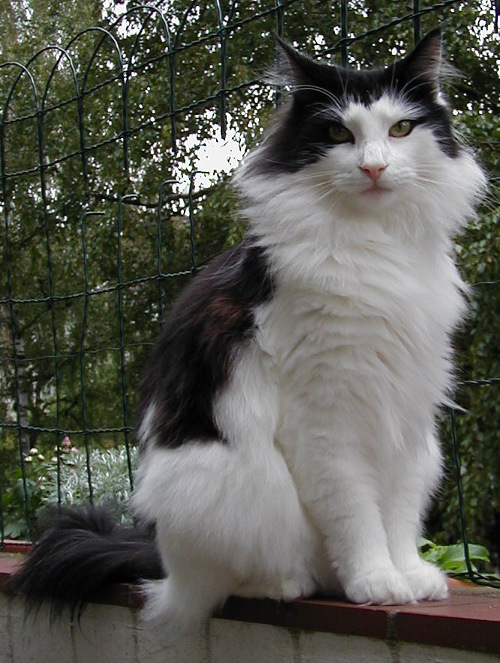 Since this breed is fairly self contained, the Norwegian Forest Cat is an ideal breed for busy professionals. Her quiet nature makes her ideal for apartments or condos with thin walls, as she won't disturb neighbors who don't like cats.

While this cat won't usually quarrel with a second cat, it is said that she doesn't actually need the companionship to keep her happy. As long as you give her a bit of attention in the morning and evening, feed her, and groom her, the Norwegian is quite content with her life. Of course, she won't refuse extra companionship and attention from you, either.

I would always recommend, however, that your cat have a playmate. Two cats are always better than one.

So, if you want a cat with a warrior past and a gentle nature, then the Norwegian Forest Cat may just be the ideal breed for you. After all, if these beautiful cats were loved by the legendary Vikings, they have to be special.

When you're ready to adopt, consider a rescue.