Is The American Shorthair The Perfect Breed for You?

The American Shorthair is a relatively large, generally healthy cat breed descended from the European Shorthair. They have a working cat background, and are muscular and athletic.

They're excellent mousers, but they're also content to curl up on the couch with you.

If you aren't familiar with pedigreed cats, you may be under the impression that this is not truly a breed, but simply a fancy name for an alley cat. Not true!

The Shorthair, which was called the Domestic Shorthair until the mid-nineteen sixties, is a pedigreed cat that meets a specific standard.

These cats are classified as a part of the Championship Class by the Cat Fancier's Association. They tend to be on the medium to large side, weighing in at eight to fifteen pounds. 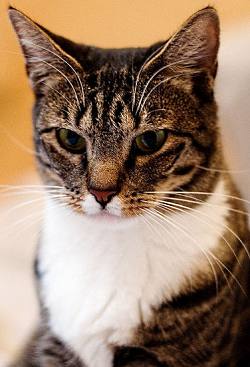 The Shorthair has a wide face with prominent cheeks and a powerful well muscled body. Her blunt-ended tail is medium-long, slightly thicker at the base than at the tip and is shorter than her body.

Her eyes are big and have an alert expression.

While tabbies are probably the most common Shorthair patterns, tortie, smoke, and bicolor patterns are also available. In fact, more than 80 different colors and patterns are recognized.

You may have seen one of these cats on TV or in the movies in the striking silver tabby color pattern.

This color has been popular since one of these gorgeous cats was the winner of the nineteen sixty five United States Cat of the Year Award. The tortoise shell and white cat, however, also known as a Calico is also quite popular.

The American Shorthair is actually an import brought over from Europe by early settlers to America. It is a descendant of the European Shorthair, but is a distinctly different cat now.

As this breed adapted to life in the United States, it developed a heavier, coarser coat, which is more dense than its British Shorthair cousins.

In addition, the American version of this cat is a bit larger than its ancestor, but with a slimmer, sleeker look - not as "cobby."

The American Shorthair is usually a mild mannered, quiet cat, although it can be a formidable hunter of mice and other small rodents.

Since this cat breed is quite content to curl up on the sofa, it is an ideal breed for apartment living. These cats are often tolerant of children and other pets, as long as they are not mishandled. This makes the Shorthair breed a good choice for a family looking for a pet cat.

Originally, any cat that met the breed standard could be registered as a pedigreed American Shorthair. This cut down on the inbreeding that has caused so many hereditary health conditions in other breeds. Of course, as the breed developed, non-pedigreed cats could no longer be registered just because they resembled the Shorthair.

Some members of this breed may not be very active, especially if kept indoors full time. These cats already tend to be a bit on the large side, so you may want to keep an eye on your cat's weight.

Some cat health experts, like Lisa A. Pierson, DVM, recommend against dry cat food as the carbohydrate levels are too high. Offering unlimited amounts of free choice dry food, therefore, can lead to an overweight kitty.

You should discuss dietary concerns with your veterinarian, including the possibility of feeding a weight control diet if needed. Better yet, give your cat some attention and much needed exercise by playing with her often.

While Shorthairs do not have problems with matted coats, grooming is still important. Frequent grooming helps cut down on both shedding and hairball problems, and kitties usually like the attention.

A Furminator and a slicker brush do wonders for a kitty's coat.

You may want to accustom your kitten to having her teeth brushed, as well. As cats age, they can develop severe dental problems if their teeth are not cared for properly.

Dental problems, especially in a senior cat, can lead to other major medical issues. But, dental problems can show up as early as 3 years.

This breed is an undemanding but enjoyable pet. These are strong cats with working cat bloodlines, but with a gentle nature. If that is what you are looking for in a feline companion, then the American Shorthair may be the ideal choice for you and your household.