Famous Cats in the White House

Here is my list of famous cats in the White House.

These cats had Presidential clout, diplomatic appeal, and were, for a time, the most powerful cats in the world.

Roosevelt had cats named Tom Quartz and Slippers, Kennedy had Tom Kitten, Clinton had Socks, and the Bush's had India. 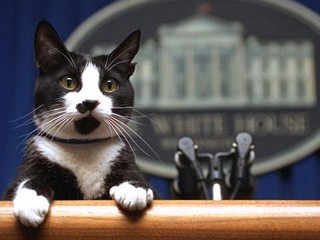 The Cat Who Would Be President