The Big Maine Coon Cat is a Bushy Tailed Charmer

The big Maine Coon cat is, by some measure, the largest domestic cat breed. The title of "World's Longest Cat" has been awarded by Guinness World Records to two members of this breed (longest cat whisker too). 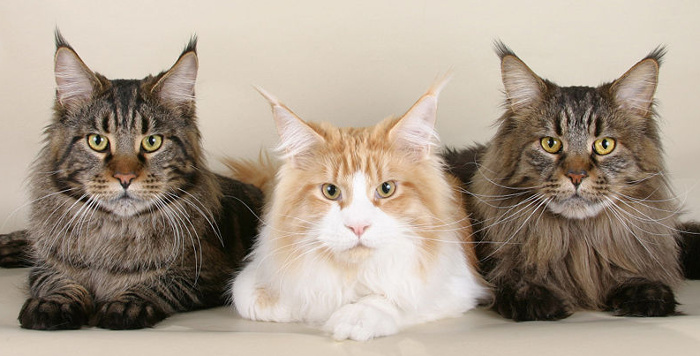 The current record holder, Stewie, replaced Leo, the previous champion, by measuring a half inch longer from nose leather to tail tip. At 48.5 inches, Stewie a big kitty.

Some cats have been heavier (Guinness no longer encourages people to fatten up their cats to win that contest).

Some hybrid cat breeds may, in fact, be longer, but in my book, those are not true domestics. Some cats may have longer legs (the Serengeti, a hybrid based on the Bengal cat, comes to mind).

Another hybrid, the Savannah cat, especially the F1s, certainly can look much larger. In fact, Scarlett's Magic, an F1 Savannah holds the record for "Tallest Cat." F1 is the term for a first generation hybrid, meaning that the parents of this cat were an African serval and a domestic cat.

But for lovers of the big Maine Coon cat, their charm, their character, their sweetness and compelling voices (see -- and hear -- the purr-meow in the video below), and yes, their large size, are no match for any other breed.

What do fans of this breed love so much about the big Maine Coon cat? Among other things...

All in all, they're big balls of furry feline goodness.

Maine Coons have a thick long coat which may have a shaggy appearance. But it's silky with a substantial glossy topcoat over an undercoat.

Their fur is luxurious but relatively easy to care for (non-matting for the most part) compared to other longhairs. They have a substantial tail plume, full britches, and a beautiful ruff around the collar. 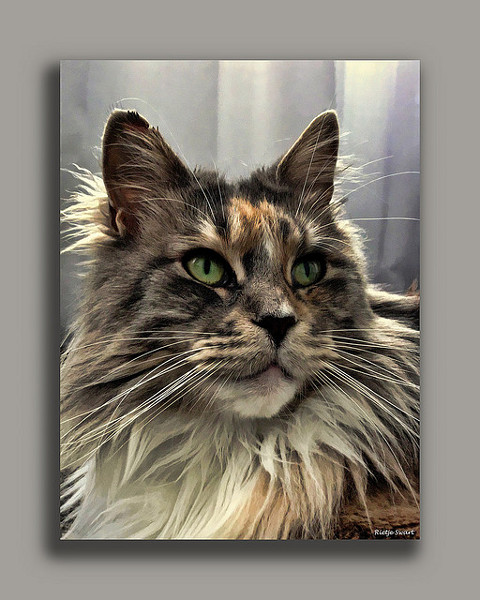 They epitomize the regal nature of the cat, and look majestic. Their fur, of course, is a great insulator, providing excellent protection from cold winters.

Referred to as the United States' oldest cat breed, these cats were shown as far back as the 1860s. There were competitions for Maine State Champion Coon Cat at the Skowhegan fair.

In 1861, a black and white Maine Coon named Captain Jenks of the Horse Marines took best in show. That was long before modern-style bench cat shows that members of the Cat Fancy now put on.

The popularity of these cats declined in the US in favor of imported Persian cats from Great Britain, but interest picked back up again in the 1950s.

In 1953, the Central Maine Coon Club was formed and set about re-establishing the breed. Still, the Persian, and its many variants, often comes out on top as the most popular cat breed in the US.

In more recent years, the Maine Coon often battles paw-to-paw with the Persian (and its many variants) for popularity. Maine Coons are often in the top 5 on any given cat breed list including the CFA and GCCF.

The Maine Coon comes in many colors and patterns, including black and white, tortoiseshell, a particularly beautiful choice, and all white. Before the Maine Coon cat breed was recognized as such, white cats in New England and the state of Maine were generically called "Angora" (a term used to describe a number of longhaired cats over the years).

The best known Maine Coons, however, are probably tabby cats. In fact, the "M" on the forehead of tabbies is sometimes said to stand for Maine Coon.

Known as "Coon Cats," there's a folk tale that says that the breed originated by the mating of a raccoon and a semi-feral domestic cat. Another story is that these cats were large enough and strong enough to chase off raccoons, so farmers kept them and gave them that nickname.

People who are fortunate enough to have one of these big kitties at home marvel at their "gentle giant" nature, coupled with their "dog-like" personalities and their ability to get along with all family members, including four legged ones that bark.

You might think that such a large cat would tend to be lazy, but don't confuse overweight cats with those with large frames. These big kitties are described as playful extroverts.

They can be somewhat chatty, very interactive with their family, and may follow you from room to room. All this attention may drive some people crazy! I recommend you get at least two.

If you like the big Maine Coon cat, or you're looking for big and sturdy cats in general, you might also be interested in some other longhairs, such as the Siberian cat, or the Norwegian Forest cat, or the Ragdoll cat. There's also a longhaired version of the American Bobtail cat.

If you're considering bringing one of these big beauties into your house, consider adoption through a Maine Coon rescue.