Hybrid cat breeds are a mix between certain wild cat species and various domestic cat breeds. They're banned or restricted in certain areas of the U.S., as well as other parts of the world.

They're a relatively small percentage of the total cat population, but attention in the news has often made it seem like they're everywhere.

Sometimes billed as an "exotic" pet, these animals are often seen by those who can afford to own one as a status symbol, a declaration of individuality and uniqueness.

Exclusivity and uniqueness drives the price of hybrid cat breeds up, making them even more desirable as a "status cat" but they are not without controversy. Like two other high priced status symbols, diamonds and gold, these kitties have their share of detractors.

The two best known hybrid cat breeds are probably the Bengal and the Savannah, but other variants include Chausie (Stone Cougars), and Safari Cats.

The Cat Fanciers' Association (CFA) doesn't currently recognize any hybrids, but other Cat Fancy organizations, such as The International Cat Association (TICA), do. Below, I've listed some hybrid breeds as well as some less controversial alternatives if you want that "wild look."

Below are some of the hybrid cat breeds that exist today. If you're interested in one of these cats, keep in mind that they will likely be expensive. They also are not allowed by law in certain areas (check your local ordinances), and they can be a handful to care for.

There's a certain "designer" pet aspect to these kitties. This is largely due to the combination of the high price that hybrid cat breeds demand plus the exotic nature and wild look of these animals. This "exotic exclusivity" makes them ripe for anyone who likes to be thought of as a collector. Unfortunately this results in some adoptions being done without regard to the commitment required to properly care for a cat.

Bengal cats are a cross between Asian leopard cats and domestic cats. Bengal cat videos are very popular on Youtube, with their owners either showing off their jumping and agility skills, or their love of playing in the bathtub.

Among hybrid cat breeds, the Bengal has become so popular that it seems almost mainstream now, and it appears to me that it has lost at least some of that exclusive status.

Savannah cats cross the African serval with a domestic cat. Servals are quite a bit larger than house cats, and the resulting Savannah is a big kitty. They're long and lean, with long necks and legs.

The Savannah cat breed first appeared in the late 1980s, and were accepted by TICA in 2001. They can be shown in the Advanced New Breed Class.

In the last few years, Savannah cats have become known from news stories involving the Australian ban on their importation, as well as their popularity in New York City as apartment kept cats who have to be secretly walked at night (hybrid cat breeds are banned in NYC).

Below is a video on the Savannah cat from Big Cat Rescue. The video focuses on a rescue cat that BCR took in, and highlights some of the potential problems with hybrid cat breeds.

The Chausie (or Stone Cougar) are a Jungle cat and domestic cat cross. This cat has a bit of a cougar-like look.

Chausies were first bred in the late 1960s, are TICA registered and can be shown in the Advanced New Breed class.

The Safari cat is a hybrid cat breed consisting of the South American Geoffroy's cat and the domestic cat, first bred in the 1970s. They are said to be difficult to breed, and are rare, even for hybrids.

Hybrid cat breeds are controversial for a number of reasons. Most hybrids are very pricey compared to most other pedigreed cats. This potentially leads to favoring income over the welfare of the cats.

There are potentially serious issues with breeding, differences in anatomy and gestation periods. Kitten mortality rates may be high, and some have called the hybrid breeding process irresponsible or cruel in some cases.

Carole Baskin of Big Cat Rescue warns against adoption and breeding of hybrid cat breeds and refers to spraying, behavior problems, and digestive issues with these cats. Other opponents of these cats are against breeding as a general practice. They point out the millions of abandoned cats and kittens, many of whom won't be adopted and will be killed due to a lack of space.

Failed breeding attempts, or deaths due to deformities or euthanized cats who didn't make the grade are legendary. Many times you don't hear these stories until many years later. This is not just the case with hybrid cat breeds, but the practice of cat breeding in general.

I've often said that living with cats is like living with little wild animals in your house. Hybrids are, to some degree, an effort to enhance that experience and magnify the built-in mysteriousness that house cats already exude.

Note: Some of the breeds below are based on the Bengal, which is itself a hybrid. This makes them hybrids, but with a higher percentage of domestic blood in the mix.

The Abyssinian cat breed is a domestic cat with no wild cross-breeding that reminds me in looks of a familiar wild cat in North America, the cougar, also called the puma or mountain lion. While there are no mountains in Florida (we barely have hills!), the endangered Florida panther is a subspecies of cougar.

Abys tend to be very active, agile, and athletic, enthusiastic about climbing curtains and getting on top of cabinets. Prepare to spend time with your Aby and stimulate her. 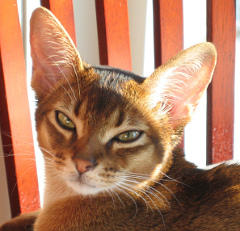 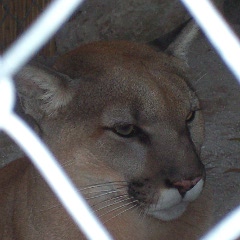 Above, the Abyssinian (left) resembles the Florida panther (right)

What cat breed has jet black fur, copper colored eyes and looks like a wild black panther? The Bombay of course.

Black leopards are known to inhabit southern India, and the Bombay cat gets its name from the Indian city currently known as Mumbai. The striking looking all-black Bombay cat breed was developed not in some exotic location, though, but in Kentucky.

The Bombay's lineage began in 1958, and is not from wild cats, but from the mating of two domestic cat breeds: a Sable Burmese and the black American Shorthair. The intention of breeder Nikki Horner was to create a "copper-eyed mini-panther with patent-leather fur."

This exotic looking kitty looks right out of the jungle but is all domestic, all the time. The British version of this cat was created using British Shorthairs and is classed as as variety of the Asian Shorthair.

This exotic looking spotted cat is known for its playful and interactive nature, as well as extreme speed. The Egyptian Mau may be the world's oldest domestic cat breed. Maus tend to bond well with their humans, but may be shy with strangers. They are often used as examples of cats that can be leash trained, but may do best being an only cat.

Egyptian Mau vs. Bengal cat. Can you tell which is which? One of the cats in the video below has Asian leopard cat blood in the bloodline, and one does not.

The Ocicat breed is an exotic looking spotted cat that resembles the wild ocelot ("half ocelot, half cat"). You wouldn't know it to look at them, but believe it or not, this breed is derived in part from the Siamese. Like the Bombay, it has a 100 percent domestic gene pool.

In 1964, breeder Virginia Daly was trying to produce an Abyssinian pointed Siamese. She mated a ruddy coated Abyssinian-Siamese hybrid (hybrid as in parents of two different domestic cat breeds, not a wild cat and a domestic species inter-mating) with a Chocolate Point Siamese male.

That mating produced an Aby-pointed Siamese, which is exactly what she was looking for. Also in that litter, however, was a golden spotted male kitten, the very first Ocicat, named Dalai Tonga. Tonga was sold, but later, after working more with Tonga's parents, Virginia was able to start the line.

Pixie Bob cats are sometimes said to have come from wild bobcat lineage. Recent research into domestic feline genetics has yielded some surprises, and revealed some interesting history of the house cat.

I haven't been able to find, however, any documentation that shows any evidence of bobcat genes in the line. It makes for a good breeding legend, though!

The Cheetoh is based on a cross-breed between the Bengal and the Ocicat. As mentioned above, the Ocicat is a fully domestic breed founded from the Siamese and the Abyssinian.

In the mid 1990's, Karen Sausman created the Serengeti cat with the African serval in mind. Unlike the Savannah, however, the Serengeti breed has no serval genes. This breed was created by crossing Bengal cats with Oriental Shorthairs. Like the other hybrids, they are not recognized by the CFA, but are TICA registered and can be shown as a preliminary new breed.

Toyger cats are bred to look like little tigers. Many breeders donate to tiger conservation, so this miniature tiger helps to save big tigers in the wild.

The breed was started by Judy Sugden in the late 1980s, by crossing a Bengal with a striped domestic shorthair. Judy's mother developed the Bengal, so that was not a surprising choice.

The Bengal itself is a hybrid, so Toygers, like the Serengeti, do have the Asian Leopard cat blood in the line and therefore straddle the line as far as being 100 percent domestic cat. That makes them indirect hybrids. Sort of a hybrid once removed, if you will.

Toyger breeders are shooting for a coat that looks as tiger-like as possible, with dark stripes on an orange/tan background. The long random stripes should be more dramatic looking than a typical tabby cat, and, unlike the Bengal, there should be no spotting.

The last meow on hybrid cat breeds has not been heard yet, I'm sure. Legal and ethical issues with these cats are not easily solved. With some cats selling for thousands of dollars each, there are reports of horrible breeding conditions from people trying to make a buck.

Problems with getting some hybrid cats to adapt to living with humans have been reported. Dietary problems, such as stomach upset or refusal to eat commercial cat food are well-known. Some of these cats can't get along with other pets. Issues with getting them to stop spraying or destroying furniture have been cited.

In various places in the US and around the world, hybrids are not welcome. The state of Georgia, the city of New York (where we know people keep them anyway), and Australia have enacted bans.

Personally, I love the look of some of these cats, but I also think that other cats, such as classic tabby cats can be just as striking, without any of the controversy or potential problems.

I also think that rescue cats, of any breed (or not), make fine companions.