Tabby cats are instantly recognizable, of course, with their spots and stripes.

They're so common that many people instantly think of them when the word cat comes up.

Many people think of them as a breed, but this is not the case. 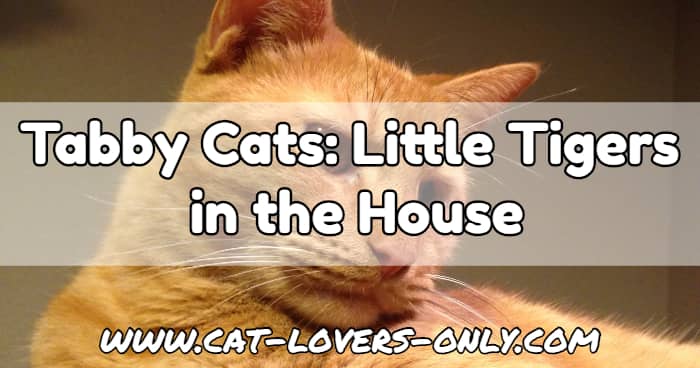 Tabbies are very popular as pet cats, and hence the popularity of the name Tiger as a male cat name. That of course, and Tigger, the famous cartoon cat from the Winnie the Pooh stories.

Tigger and Tiger are often number one and number two, respectively, as the overall most popular cat names in the US.

These two classic tabby cats in the video below are having a mutual grooming session, which often turns into play fighting. This is a behavior often seen in kittens and adult cats as well. 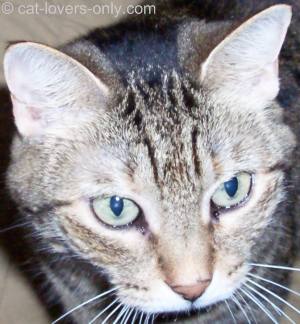 Priscilla has the tabby "M" marking on her forehead, although hers is not as well defined as some and is more like the scarab pattern.

Contrary to what some people assume, the term tabby does not refer to a breed, but a coat pattern.

While this pattern may show up in some breeds, it is also often seen in non-purebred cats (moggies) as well.

The genetics involved with cat coat color and patterns are somewhat complex, and there are a number of distinct tabby patterns.

Since coat color and coat patterns are not interdependent, tabby cats can actually be any color.

They can also appear in combination, for example, with white in various areas of the body.

There are four different tabby patterns (mackerel, spotted, ticked, and classic). These may be in any of the tabby colors.

Depending upon the type of tabby pattern, the markings may be described in different ways. In breed profiles, various terms are used to describe the markings as ringed or barred, blotched, and spotted.

Here's an excerpt from the CFA breed profile for the Norwegian Forest cat, describing the classic pattern:

CLASSIC TABBY PATTERN: markings dense, clearly defined, and broad. Legs evenly barred with bracelets coming up to meet the body markings. Tail evenly ringed. Several necklaces on neck and upper chest, with locket allowed. Frown marks on forehead form an intricate letter “M.” Unbroken line runs back from outer corner of eye. Swirls on cheeks. Vertical lines over back of head extend to shoulder markings which are in the shape of a butterfly with both upper and lower wings distinctly outlined and marked with dots inside outline. Back markings consist of a vertical line down the spine from butterfly to tail with a vertical stripe paralleling it on each side, the three stripes separated by stripes of the ground color. Large solid blotch on each side to be encircled by one or more unbroken rings. Side markings should be the same on both sides. Double vertical rows of buttons on chest and stomach. White buttons and/or lockets allowed.

Tabby cats can appear in many breeds. Some of these will be accepted by the various registries of the cat fancy for pedigreed registration and showing, but not all will.

So, cats of certain breeds that have tabby markings can't be shown, and are therefore pet quality. If you'd like a pet of a particular breed, but aren't interested in showing your cat, this can be a great opportunity.

You can get a purebred pet cat at a reduced price from what you would have to pay for a show quality cat. Simply contact some breeders and ask them about pet quality cats.

Make sure you thoroughly check out the breeder before you buy. Before doing any of that, however, you might want to look into getting your tabby cat from shelters, rescue groups, or pure breed rescues.

Some of the tabby cat breeds the CFA recognizes are: