The Siberian cat breed is a striking looking longhair, and the national cat of Russia.

This breed is similar in looks to the Norwegian Forest Cat, and also may be mistaken for the Maine Coon.

Some speculate that this breed may be the ancestor of the Norwegian Forest Cat, and/or possibly the Middle Eastern Longhairs as well.

It's a natural breed, which the CFA says has been in existence for over 1,000 years. Although apparently long established in Russia, not a lot of documentation exists about this cat's history.

The Siberian cat is also sometimes referred to as the Siberian Forest cat. In the late 1800s, these cats made appearances at British cat shows.

They were known then as Russian Longhaired cats, and one was owned by Harrison Weir, organizer of the first modern cat show at the Crystal Palace in London in 1871.

The modern version of the breed began in 1987, when a pair of these cats was brought to Germany from St. Petersburg. 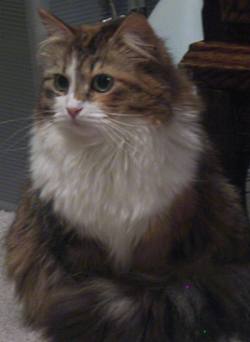 An episode of the TV show Cats 101 on Animal Planet did a profile on the Siberian cat, and echoed the lack of historical record.

On that same program, they mentioned that these are one of the more rare cat breeds. In the United States, expect breeders to often have waiting lists.

These are large and sturdy cats, taking as long as five years to reach maturity and full size.

Interestingly, the folks at Cats 101 contradicted themselves. In one episode, the Ragdoll cat was named the largest domestic cat breed.

In this episode, however, they stated that the Siberian was the second largest house cat, next to the Maine Coon, ignoring the Ragdoll's status completely. Confused? Me too.

Their hind legs are a bit longer than their front, similar to the Manx. The Siberian cat molts in the spring and fall, and owners of these beautiful bushy cats should expect lots of shedding and brushing.

Despite their thick fur and three layer coat, these cats are said to be one of the low allergy cat breeds. If you have cat allergies, this may allow you to live in close quarters with a Siberian without suffering from too many symptoms.

No cats are truly hypoallergenic, but...

Siberians are supposed to produce less of the Fel d 1 protein, which people with cat allergies often react to. Research shows that Fel d 1 is not the only allergen produced by the domestic cat, however, and there may be more allergens that have yet to be identified as well.

If you suffer from cat allergies, though, you may want to look at the Siberian as an option. You'll want to first expose yourself to a Siberian in order to test your reaction.

If you do react, you may find you have a milder reaction than you would to most other cat breeds. If you're crazy, like me, you'll get a cat anyway despite your allergies, and just manage them.

Max, a Siberian belonging to WBZ radio host Steve Leveille and his wife Diane is a true Russian import. Steve did a test run with Max to test out possible allergy problems, and passed the test with flying colors.

Max is originally from St. Petersburg, Russia, and was a champion show cat as a kitten. Max was featured on the aforementioned Cats 101 TV show.

The episode showed Max visiting the radio station where Steve hosts his late night show. Steve was let go from the station during a round of budget cuts in early 2009, but listeners (probably all the cat lovers) protested, and Steve was reinstated. Max's fans have clout!

These cats are often "mitted," meaning that they have white paws that contrast the color of the rest of the legs. You can find extensive information on this breed's many coat colors at this website, as well as the TICA breed standard and physical description.