Meet some rare cat breeds. These felines are, by the numbers, less popular.

But fans of these breeds are no less enthusiastic about them as those of the most popular domestic cat breeds.

Many of those listed here are relatively new cat breeds, which is in part why they're still rare.

Some very recognizable cats, such as the Siamese cat, the Persian, and the Maine Coon cat have been around a long time. This is part of the reason those breeds are so popular.

Many of the below cat breeds are relatively recent creations, however, in the feline breeding world.

A few things to note about these rare cat breeds:

Keep in mind that all pedigreed cats are rare when taken as a percentage of the total pet cat population. Purebreds simply don't have big numbers. These kitties are generally even more so.

The American Lynx is a relatively new breed developed in America by Joe Childers of North Carolina, and Robert Mock of Seattle, Washington. It is a short tailed (stump-tailed) cat in both shorthaired and longhaired varieties. They come in a variety of coat colors, including two tabby variants that are called Leopard and Tawny (Encyclopedia of the Cat, Barnes and Noble, 2005).

There are other Lynx-named variants as well, including the Desert Lynx, which may be out-crossed to the American Lynx or other domestic breeds. There is also the Alpine Lynx and Highland Lynx.

These and other cats were reportedly founded by cross-breeding with bobcats, which, if true would make them hybrid cat breeds.

According to Arlene Magrino, "In the beginning, I used a mixture of Bobcat, feral Manx, Maine Coon, American Lynx and Pixie-Bob to create the Desert Lynx." The International Desert Lynx Cat Association website states "The Bobcat is the foundation cat for the Desert Lynx breed."

Like the stories of the Pixie Bob cat, however, this is disputed and apparently breeding lore. There is no confirmed evidence (that I know of) that bobcat genes have been found in these breeds.

In addition, it's been claimed that Pixie Bobs, the American Bobtail, and the American Lynx are different names for the same breed. This is not the case, as these lines were bred separately.

Apple-Headed Siamese or Appleheads, also known as the Opal Cat, is a revival of the early type of Siamese. These cats are developed by breeders who prefer the classic, stockier look to the extreme type (long and slender legs, bodies, and wedge shaped heads) seen in the modern Siamese. 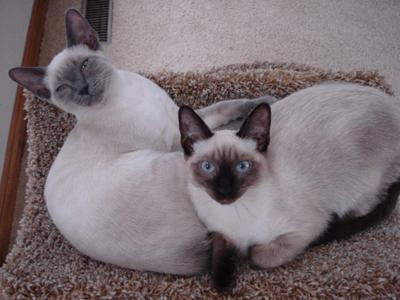 It's also called the Traditional Siamese, and some breeders refer to them as the "old-fashioned" type or classic. They are registered in TICA as Thai cats (see below for more on Thai cats). For examples, see WeAreSiamese Cattery and Katz Meow Cattery.

In 1976, Dr. Truda Straede set out to produce a new spotted cat from a diverse gene pool with over 30 foundation cats. This would become the first breed to be developed entirely in Australia.

Burmese made up half the foundation stock, Abyssinian one quarter, and the rest was made up of domestic shorthair tabby cats. The idea was to produce an intelligent, spotted tabby of Burmese type that would be ideal as house cats.

Originally called the Spotted Mist, marble patterned cats were added to the breed and the name was subsequently changed to Australian Mist. This is a muscular cat of moderately foreign type with large eyes of various shades of green. They are said to be very affectionate kitties.

The Burmilla cat breed began in the UK in 1981 as the result of an accidental mating between two cats of different breeds, both of which have amazing fur. 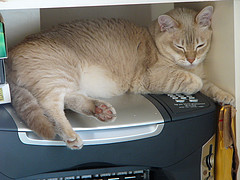 Like a fairy tale, or perhaps a cat's tale, these two cats belonged to a baroness.

A Chinchilla Persian named Sanquist, and a Burmese cat named Faberge had an illicit love affair.

The baroness was enamored with their beautiful kittens, and thus a new breed was born.

20 years later, the Cat Fanciers' Association now recognizes a longhaired Burmilla as well as a shorthaired version in the Miscellaneous class. Other associations in various parts of the world also recognize long and shorthairs. These cats still remain, however, one of the more rare cat breeds, with relatively few registrations.

The Celonese is from Sri Lanka (formerly known as Ceylon) and is also known as the Ceylon Cat. This breed was founded in 1984, when a local domestic cat was found feral by Italian veterinarian Paolo Pellegata and brought to Italy.

They were introduced to the Cat Fancy at the Como Cat Show and a breeding program was started. The breed was submitted to the Federation Internationale Feline (FIFe) in 1984 for recognition.

The original coloring is known as Manila (black markings on a sandy-golden ground color), but Blue, Red, Cream, and Tortoiseshell varieties were later also bred.

Sometimes referred to as the Alpaca Cat, this is a curly-coated breed originating in The Dalles, Oregon, and "should more properly be called The Dalles La Perm Cat." (Encyclopedia of the Cat, Barnes and Noble, 2005)

It originated with a litter of farm cats found by Linda Koehl in the 1980s, one of which was bald. After two months the kitten began to grow a curly coat. This brown tabby, called Curly, became the foundation for the new breed.

It has been developed as both a shorthair and as a longhair with tight ringlets. It was recognized by the International Cat Association in 1995 and awarded Championship status in CFA in 2008.

The Nebelung Cat is an American breed that is essentially a long haired version of the Russian Blue, like this cat, named Halo. Developed in the 1980s by breeder Cora Cobb, the breed was founded from the mating of a female who appeared to carry Angora genes.

Russian Blue cats were used as an outcross, and they're intended to look like early 19th century long haired cats that may have originated in Russia. 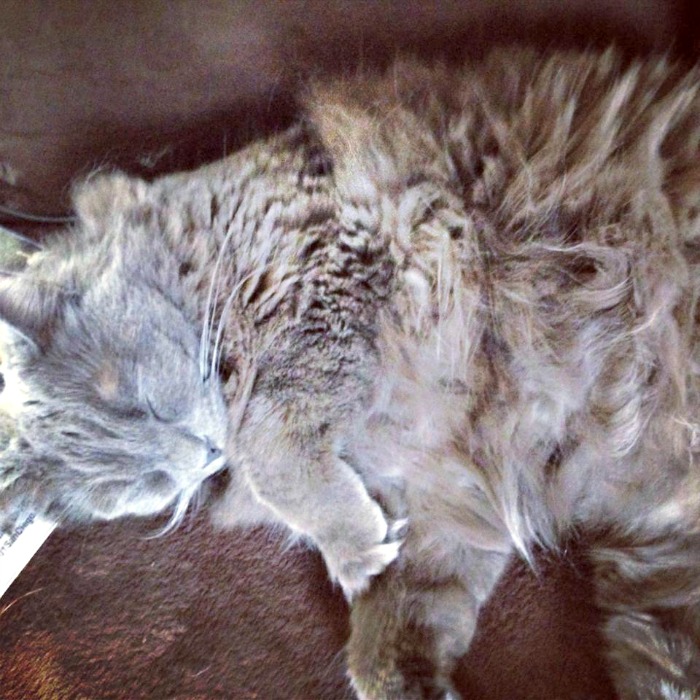 Ojos Azules is Spanish for "Blue Eyes." Among rare cat breeds, this is an even rarer find. These cats got their start with a tortoiseshell female with blue eyes discovered in New Mexico in 1984. It is claimed that the dominant blue eyed gene is not linked with deafness when it appears with pure white coats, as in some cats.

The name "Poodle Cat" has prompted some to wonder if poodles were bred with cats at one point. While science sometimes proves itself wrong, cats and dogs are not genetically compatible.

The Poodle Cat, or Pudelkatzen, was created in Germany by Dr. Rosemarie Wolf by crossing a Devon Rex with a Scottish Fold to produce a cat with both a Rex coat and folded ears. The Devon Rex and Cornish Rex cats are also sometimes referred to as poodle cats due to their wavy coats.

You may also have seen cats with a "poodle cut" where the fur is trimmed and a pompom of fur is left at the end of the tail like a poodle would have its hair cut. This is sometimes done to Persian cats and is more often referred to as a "lion cut" where the mane is left long as well.

The Siberian cat is a large, allergy friendly cat, originating in Russia. It is said to have been around for over 1,000 years and it was once speculated that this breed is the ancestor of the Norwegian Forest cat, and other modern cats.

But it wasn't until the late 1980s that a modern version of the breed was founded when two cats were brought to Germany from St. Petersburg. The Siberian Forest cat, as it's sometimes called, is a rare cat breed in the US. Breeders are not that plentiful, and may have waiting lists.

Registered with FIFe and TICA as the Sokoke, this rare cat breed was an accidental discovery made by by Jeni Slater in the late 1970s. On the edge of a forest in the Sokoke region of eastern Kenya, land clearance uncovered a litter of kittens with unusual markings.

Were they a local wild cat species? A variety of domestic cat? Or a hybrid cross between domestic and wild cats in the region?

These cats were apparently easy to tame, suggesting that they may have been a mutation of domestic cat. It was thought at one time that no more of these cats existed.(Encyclopedia of the Cat, Barnes and Noble, 2005)

The Sokoke has a slender body with a long, elegant look and a long tail that tapers to a point. TICA describes this cat as being a rare breed with a "ticked modified classic tabby" with a see-through tabby pattern. It's this unusual coat pattern, with ticking in both the ground color and the pattern itself which makes this cat most unique.

The name Thai can refer to several different cats. At one point, Thai referred to "a new British breed that was a longhaired form of the Korat." The only difference between the two breeds was length of fur (Encyclopedia of the Cat, Barnes and Noble, 2005).

The GCCF recognizes cats that are of Korat type and lineage but differ from the traditional blue Korat coloring. These cats are referred to as Thai Lilac or Thai Pointed (Blue or Lilac).

In The International Cat Association (TICA), Thai refers to a fairly recently registered breed. Thai in this case is a separate name for the old-style or traditional Siamese (see above).

Despite the word "wild" being in the name, this rare cat breed is a domestic cat developed from cats discovered in Singapore in the 1980s. The intent is to recreate the style of Abyssinian cat as it existed over a century ago.

Unlike the modern Abyssinian, which is available in a number of colors, only the original Ruddy coloring is bred in the Wild Aby.

The York Chocolate cat is an American breed which began in 1983. The mating of two farm cats, a longhaired black male, and a longhaired black-and-white female resulted in kittens with a dark chocolate brown coat.

Although appearances suggested the possibility of Siamese in the lineage, their exact ancestry is unknown, which made it somewhat difficult for the breed to gain acceptance.

The name of the breed comes from the color of the first litter and from the location of owner Janet Chiefari's farm in New York state. Some of these cats have mostly brown coats, while others have mostly white fur patched with chocolate brown.