Pictures of My Cats

The Cat Lovers Only Cats Exposed!

Here are some pictures of my cats. These are my cats, and they're the inspiration behind Cat Lovers Only (of course). As any cat lover knows, your cats are your children, and you are their surrogate mother (yes, even if you're a man). They never grow up, remaining children their whole lives.

These little creatures have impacted my life in ways that I cannot describe. They've taught me so much about life, fairness, letting go, living well, and much more. I only wish I could make them understand how much they mean to me.

Priscilla is a tabby, and Teddie and Frankie are tortoiseshell cats. Teddie is the actress, Frankie is a bit of a loner, and Priscilla thinks she's their mother. I'll publish more pictures of my cats another time, but for now... 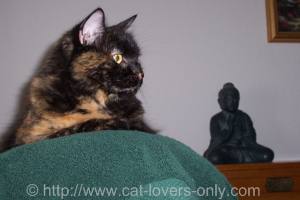 Frankie is seen here lying on what used to be her sister's favorite chair. That is, until the mean cat parents got rid of those chairs. The Buddha in the background shows her spiritual side.

This was a dangerous move for Frankie to hang out in that chair, since Teddie spent many hours there each day.

They rarely fought about it, so maybe the Buddha was protecting her. Actually, they have had the occasional spat, but they rarely fight for real. They would much rather play chase with each other. 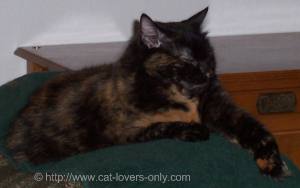 Frankie is apparently very confident that Teddie is busy (probably either sleeping in the picnic basket or getting into trouble somewhere), and takes a nap on her chair.

Doesn't she look like a hot fudge sundae in this photo? Maybe it's just me.

And the Oscar goes to... 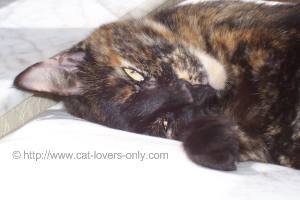 Teddie is a big ham. She's a pig for attention from anyone, and she loves to be the star of the show. She has the "tortitude" that tortie cats are known for and doesn't mind showing off at every chance she gets.

Oh, and she loves to hide and sleep for hours under blankets, comforters, in closets, and yes, even inside picnic baskets. 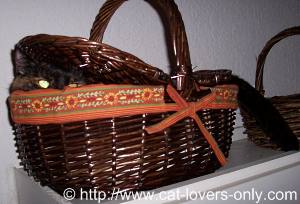 Teddie used to disappear and sleep for hours inside this picnic basket. At least, I'm guessing she was sleeping!

Eventually, she'll realize her tail is not in there with her, and bring it all in.

Teddie loves to help with the laundry, especially when it comes out of the dryer nice and hot. 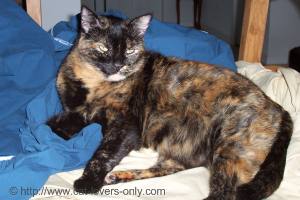 She's not very good, though, when it comes to actually folding the laundry.

Come to think of it, if it involves work, she's not really very interested.

Unless, of course, it's hunting (bug catcher extraordinaire), or self-grooming. She's good at those things.

Enter the queen of all she surveys... 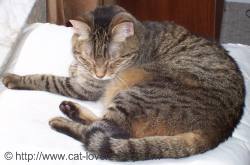 Priscilla is the queen. I think I was talking to her and she fell asleep on me so I took her picture instead.

She is such a sweetheart. If you're not feeling quite right, she knows and comes to visit you.

She loves to lie on top of you and purr you back to health. 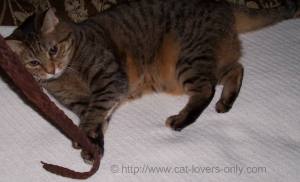 No matter how many store bought cat toys a girl has, there's just something special about playing with your daddy's belt.

Seriously, there are a few toys that my cats play with that can be bought at a store (or online, of course), but stuff around the house is often much more fun! Priscilla agrees as you can see.

Here's one more of Frankie getting ready to go on a trip. Probably a fishing trip. Maybe even on a tuna boat (she only eats albacore tuna, but actually prefers wild caught salmon). 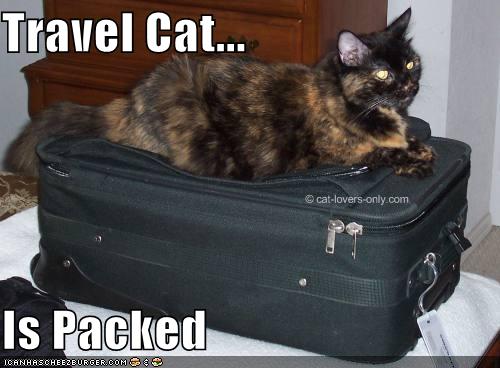 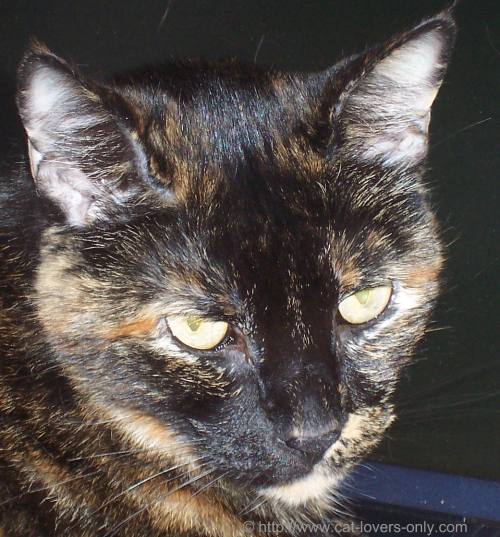 Above is a head shot of Teddie Monster cat sitting on the Sony laptop I used to write the very first web page (and many more) for Cat Lovers Only.

I hope you've enjoyed this collection of pictures of my cats!