The Calico Cat: Not a Breed!

Some refer to the calico cat as a breed, but it's actually not a breed at all. Instead, calico is a tri-color coat pattern, often of black, red, and white. Many different types of cats can have this coat pattern, and it is not restricted to any particular type or breed.

Frankie (r) and Teddie are tortoiseshells, but they do have some white in them, so technically, they would be tortoiseshell-and-white. 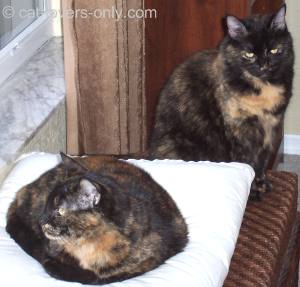 Here in the US, Calico is often a term used to describe tortoiseshell-and-white cats, although there are some differences between the two terms.

In either case, a cat with any white in the coat is called parti-color. So, this would include black and white cats (known as tuxedo cats) and the calico and tortie-and-white. 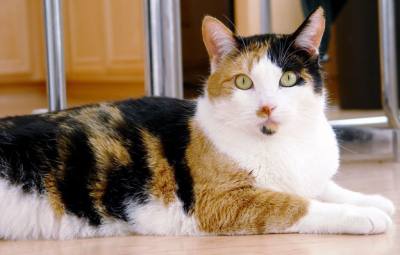 The above picture shows a typical calico with a fair amount of white and the patched appearance. I think they're beautiful cats.

Tortoiseshell cats (or torties) are defined differently depending upon which source you reference. They are sometimes defined as bi-color cats, with the two colors being black and red (no white).

When there is also white in the mix, they are known as tortoiseshell-and-white, or... calico in the US.

Calico is a term usually used to describe cats that are substantially white, with patches of the other two colors found in tortoiseshell cats.

Here is how they're described in the book, For the Love of Cats...

The calico cat, on the other hand, may be a bit different from the tortoiseshell-and-white in some respects. As of Oct 1, 2001, the calico is the official state cat of Maryland. Here is, in part, what their website has to say...

A calico cat must be a tri-color, with its three colors in distinct patches, not mixed as in a tortoiseshell cat. Some breed standards specify what percentage of the body must be white; others allow tabby striping in the color patches. To be a true tri-color, a calico cat's colors must be: white; red or cream; and black, blue, chocolate, lilac, cinnamon, or fawn. The variations in color from red and black are caused by a gene which dilutes, or lightens up the basic color, and produces a dilute calico cat, most commonly with a coat of white, cream, and blue. 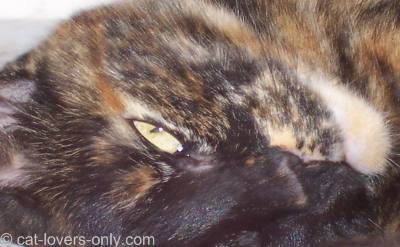 The above picture shows off Teddie's colors, from coal black to chocolate brown, through the reds and creams to white.

Mi-ke and the Japanese Bobtail Breed

One unusual and unique variation on the calico pattern is sometimes seen in the Japanese bobtail, and is known as Mi-ke.

The Mi-ke is a tri-color cat, often primarily white all over, with the calico pattern appearing only on the head, face, and tail/rear area.

According to the CFA, while Japanese bobtails can be tortoiseshell (of the black, red, and cream variety), the Mi-ke is a tri-color in black, red, and white, where the red areas may have tabby striping or spotting.

So, the calico "breed" is... not! What they are, however, are beautifully colored felines that show up in many different breeds.

The genetics of cat coat color is a complex subject. Due to genetic considerations, the genes that produce colors in domestic felines, are, to some degree, sex related. Calico cats, therefore, are mostly female, with most males being sterile.