Meet my cats. These three little furry things are the inspiration for Cat Lovers Only. This site couldn't exist without them, and my life would have been very different had I not met them.

I owe them a debt of gratitude that I can never repay. Here's a picture of the three mousketeers...

(Above) These three cats know each other well, and have lived together for many years. Notice how the tails run alongside the bodies of each, and mostly, paws are tucked in. They are well-adjusted to group living, there are no trust issues, and it shows.

All three of my cats in this picture are in relaxed poses as they settle in for an afternoon nap session together. Teddie (left) has her back turned a bit to the other two, showing no fear of being attacked. Priscilla (right) is in deep sleep and has no concern for the presence of the other two (she is fully aware that they're there).

In fact, a cat's hearing is actually enhanced during sleep, and they can return to a fully awake and alert state faster than any other animal.

Frankie has her paws tucked in, which is a traditional relaxed pose for a cat. It's difficult to change from this position to a running or fighting posture, so you know she's secure.

Do cats make good pets? As pets, cats are second to none. They are irresistibly cute, and yet retain those wild traits as well. Once you develop an intimate relationship with a cat, you'll be hooked. 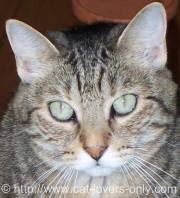 Priscilla is the caretaker of anyone who is ill or feeling down. AKA Priscilla Cat, the queen, the momma cat, (the) P-ster, Priscilli, Silly Cat, little one, and various other terms of endearment.

Priscilla is a tabby (tabby cats are not a breed, but a coat pattern) of unknown heritage, found abandoned with the rest of her litter mates in a trailer park. She was very small and malnourished, but with daily love and care from Liz she was nursed back to health. By the time I met her, she was a happy and healthy cat, about 9 or 10 months old and doing well. She was kind enough to let me become her daddy. I am grateful for that, and all the things she has taught me over the years.

She loves her mommy more than anyone in the universe, and can often be found lying on top of her purring away very loudly. She has quite the purr machine going much of the time.

Priscilla took a long time to come out of her shell, almost always running away from strangers. Over a period of years, however, she became more and more bold and learned to stand her ground, or at least not totally leave the area when people would come by. She even learned to accept some scratching from people she doesn't know well.

She pretty much hated it when we introduced the other two cats to the house. It was quite the battle of hissing and fighting for a while, but with some separation, preparation, and a little bit of work, everybody came to terms. Now, she thinks she's their mother, and often bathes them or puts them in their place when they need it.

Priscilla was born to be a momma, and takes care of anybody who appears to be under the weather, be they cat or human. All this, despite the fact that she has not been in perfect health herself. At age 11, she was diagnosed with feline heart murmur.

Further tests revealed the worst scenario, and it was determined that she had feline hypertrophic cardiomyopathy. The specialist said that if she lived another year, it would be borrowed time. She's been borrowing a lot of time ever since. 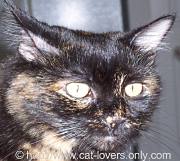 
Of all of my cats, Frankie is the one I can most say is "mine." AKA Baby Frankster, (the) Frankster, Baby F-ster, Crazy Baby Frankster, the baby, caramel, hot fudge sundae (with caramel), little one, electric tail, bushy tail, and various other terms of endearment.

Frankie is a tortoiseshell, otherwise known as a tortie. For some reason, she really took to me, and I'm her favorite human ever. One of her favorite places to sleep is either on my pillow just above my head or on my leg. She's somewhat less sociable than the other two mouseketeers.

Frankie's full name is Francesca, and she was named after a character in the TV show Sisters. She was adopted in February of 1995, along with her sister Teddie, from a no-kill animal shelter after being picked up off the streets. They were about 12 weeks old at the time, and scrawny. They both purred like crazy when we gave them food.

Frankie has medium long hair and loves to be brushed. Say the word brush and she starts yelling for it. Brush her for a few minutes, and she starts biting the heck out of the brush (and you). She's a nut case.

She's an excellent soccer player, but it's more like hockey without a stick. Give her something to toss around, and she goes to town. This is especially true of ice cubes.

She's the only cat of the bunch that doesn't go crazy over tuna. She'll often eat some, but she doesn't come running for it like the other two. She seems to prefer salmon. Not a cheap date. 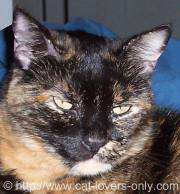 Teddie is one funny cat and is always first in line for tuna. AKA Teddie Monster (Cat), Fatso (when she was over weight), little one, Baby Teddie Monster, Monster Cat, spotted belly, Crazy Cat, and various other terms of endearment.

Teddie's full name is Theodora, and although it's spelled with an "ie" she was named for Sela Ward's character Teddy in the TV show Sisters. Like her sister Frankie, Teddie is a tortoiseshell, and displays the "tortitude" that torties are supposedly known for. You can read more about torties on the calico cat page.

She is the most sociable of all three of my cats, and will take any opportunity to grab attention from anyone. She's also the only one of my cats who consistently likes to eat flowers. Voted most likely to get into trouble, she's the most mischievous creature I've ever known, and that is why she's the Monster Cat.

At the animal shelter where we got them, Teddie edged out her sister and stepped up to the front of the cage to be greeted first. This was the first sign that she was going to demand top billing.

She loves to play fetch with either the ball or some felts pads (she and Priscilla have often played with the felt pads together). Unfortunately, she used to like to howl at 3 AM until someone (me -- sucker!) would come and play with her. She had me trained for a while, but I finally broke her of the habit.

She loves spending hours sleeping inside a picnic basket (she is most definitely basket cat), and she rarely resists sleeping on laundry. Of all of my cats, she is the biggest actress of the bunch, and one of the funniest creatures on the planet.

All three of my cats enjoy catnip oil or the actual dried catnip plant (not all cats react to catnip -- about 80 percent do). Rub some catnip on a sisal scratching board and everybody goes crazy. It's quite fun to watch.