Is your cat spraying? Or, is there a neighborhood or stray or feral cat spraying your house?

This behavior is often somewhat misunderstood, but stems from the territorial nature of your cat's wild ancestry. Can it be controlled or eliminated?

The answer is a qualified yes (in most cases). Let's look at some questions, such as...

Why Do Cats Spray? 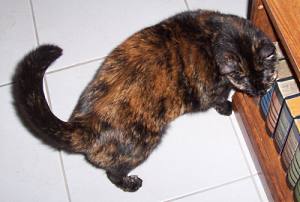 Teddie is scenting the bookcase.

All cats mark their territories and things that belong to them in several ways.

Spraying behavior is part of this marking process.

They also use scent markings left by their scent glands in various parts of their bodies to denote ownership and territory boundaries.

I'm sure that even people who've never owned cats are familiar with the rubbing of the head, the body, and the tail that most cats exhibit. In addition, scratching behavior not only sharpens claws, it releases scent from the glands in the feet.

Cat spraying behavior is part of feline communication and centers largely around territorial issues. From tigers to ferals to house cats, all felines stake out a territory and leave scent markings on objects.

Cats use scent markings as messages to other cats. These scent messages can convey a lot of information, including readiness to mate, and identify who's who.

So as to avoid confrontation, outdoor cats will time share territories and each cat can determine when another cat last marked a spot. Indoor cats also time share, although they tend to share tight quarters.

Friendly cats will leave their scent on each other which prevents confrontation. Cats and people who live to together exchange scent all the time and a communal scent forms in the home.

Cats have a social hierarchy. Defining your place in social standing and delineating the boundaries of territories are all part of being a cat.

Dominant tomcats (strong, non-neutered full males, otherwise known as intact males) are at the top of the pecking order, and will have the largest territory. These are followed by smaller toms, and then females (based on reproductive capabilities). Neutering and spaying generally reduces the status of a cat in the hierarchy.

Having clearly defined territorial boundaries ensures survival and creates an area set aside for hunting and mating. These toms are the most likely to spray and have the most to lose if their territory is breached and they're attacked. Intact males will typically spray strong smelling urine along the perimeter of their territory.

Bushes, trees, posts, fences, and other fixed objects are the most likely targets. If you've ever seen a cat spraying an object, you'll recognize the typical posture.

The cat will sniff out a good spot, then turn and with tail raised high and back feet pedaling, spray urine, usually at or around cat nose level. The tail is often quivering during this activity.

In addition to simply staking out territory cats may spray when stressed, or when they feel challenged. We'll cover how to deal with stress and challenges below.

Contrary to rumor, intact males are not the only cats that spray. In fact, both male and female cats, whether or not they're spayed or neutered, have the potential to spray. The tendency towards spraying behavior, however, is higher in non-neutered males, and usually follows the pecking order described above.

The odor of the urine released during spraying is quite pungent, and usually intact males have the most pungent odor.

A word about hybrid cat breeds is in order here since they're kind of a special case. Hybrid cats are a cross between domestic cat breeds and wild cats.

Hybrid breeds have been around for a long time, and a number of hybrid cat breeds are recognized by certain Cat Fancy associations. People who are fans of these unusual cats love them, but there are those who oppose the very idea of them, on both practical grounds as well as on principle.

Unfortunately, while these cats may look cool, often retaining much of the wild look, they have been known to have their problems. This is especially true when it comes to spraying behavior.

Many hybrid cat owners have given them up because of various behavior problems, including spraying. As a general rule, the more domestic cat genes there are in a hybrid, the better. If you are considering a hybrid, you may want to first read what Carole Baskin has said about hybrid cat breeds at Big Cat Rescue.

The difference between urinating and spraying can be seen primarily in the position/posture that your cat takes, and the volume of urine released. In addition, although all cat urine smells bad, the odor of the urine released during marking is very strong.

Usually, cat spraying behavior involves standing up, tail up and often quivering, back legs pedaling, and a burst of urine. Sometimes a cat will do this from a squatting position as well, but the amount of urine is relatively small compared to urination. This is urine marking behavior.

If, instead, your cat is releasing a relatively large amount of urine from a squatting posture with no tail quivering or leg movements, this is probably urination. This needs to be treated like all inappropriate elimination problems.

How to stop spraying behavior? On page 2 of this topic we look at some solutions.