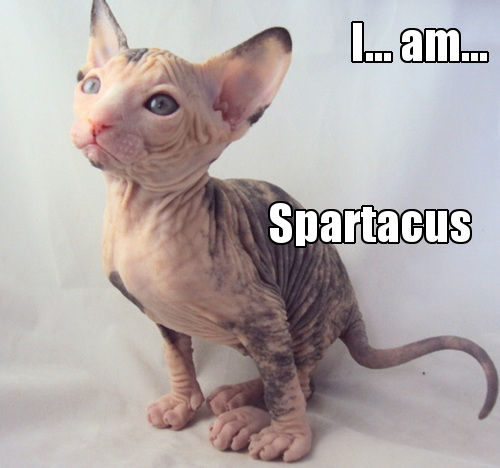 To the best of my knowledge, the cat in the picture is not named Spartacus. I just thought it would be a cute name for such an interesting looking creature.

Looking for cute names for your fur-baby? Other visitors submitted these suggestions. A big thank you to all who have submitted!

See if you can find inspiration in these for yourself. After you've named your kitty, feel free to come back and submit your own.

Unfortunately, none of these were submitted with pictures, and while some who submitted left commentary, it's just a few lines.

So, they don't really warrant a full page. But, it's still interesting to see what others have named their cats, so I've put them in this collection. These are listed in chronological order, from oldest to newest received.

We rescued Stitch from a tree in the middle of nowhere as a kitten. We were trying to come up with names, but we didn't really like anything. Being that he was a kitten, he was getting into a bunch of things he wasn't suppost to and broke some things.

Then one of my family members called him a little monster, so being the Disney fan I am, that sparked the idea of Stitch. He still lives up to his name by staying in trouble, but afterwards gives you a bunch of loving.

Caius (pronounce Kay-us) was a character in a book we were reading. But as he was the third cat to be added to the house and a lot more energetic than our aging cats, we assumed he'd cause a little chaos. And he did. But now the name Caius fits perfectly!

I used to have a cat named Coco, because she was very sweet, and smelled a bit like Coco Puffs. I then called her Coconut, Coco for short.

It was a unique name.

When one of our cats passed away, we got him for our other cat's company.

Smittems was a calico American Shorthair I used to call her smit then one day I came home and I found her sticking her head in an oven mitt. I thought that was funny so I put smit and mitten together and added an s.

She's the of the most beautiful gifts that my life has ever given me. =)

I chose it because its the name of a guitar company I use.

We adopted Izzy and she was named before hand, although strangely enough we had chosen the name Izzy already!

From Schoolhouse Rock. (Although there it's spelled Gabriela).

Her meow sounds just like a cow's "moo", especially when she is startled.

"The Retarded Prince of Darkness" : )

Our cat is super fat and has the black and white cow look thus the name Moooookie.

Well my cat is just so cute. and so is the name (:

All black petite shorthair... she's sassy and brassy! 8 yrs. My best buddy EVER!

Named him after a bar in Champaign, IL.

Editor's note: Of course, there's Thomas O'Malley the alley cat from The Aristocats. So O'Malley is very fitting for a feline!

He has the face of Winston Churchill!

Black face with white lines from both sides of lower lip to chin, looks like fangs, my little vampire cat!

(This one just had a note that said she was a female.)

His eyes looked blue like the Caribbean. The name was unique and fit him perfectly. He was a Himalayan cat.

My cat Lukey was born early. There were 3 but the first 2 died. Luckey was the only one alive.

Kids couldn't say kitty before she was named, they said "chichi."

Dominoe was a seal point Siamese mix. She was stockier than a pure bred. She was accidentally injured by my father when he didn't see her upon backing up his truck one morning. Dominoe lost the leg that was crushed. She was unfazed by this, however, and resumed ruling the roost! She was a wonderful cat.

Princess Peach is an adorable long hair torbie that I brought home for my son. He is an avid Mario fan and he decided to name her after the princess in the games. She IS a princess and has lovely peach tones throughout her fur so the name fits!

By Mike from Indiana

She's a tuxedo cat that acts like she's royalty.

Like the willow tree because we were two tree planters that rescued her!

Mud is my brown little buddy who looks exactly like the color of mud.

We were told 'she' was a girl. We named her Tiramisu (Tara). A couple weeks later, we noticed she was a boy. She is now he, and became Bubba Tiramisu (Bubba).

A few more names submitted by visitors anonymously are Keano, a hairless cat, Oreo, a loud, people-loving outside cat, and Mustacho, a kitty with a mustache.

Put a name on it!

Need to name your fur baby? Below are some pages with suggestions for names, and more about the naming of cats.

Cat names
Bow Wow Meow's 60 most popular cat names in the US.

Tuxedo cat names
All dressed up but no name? Try this list.