The Owl And The Pussycat

"The Owl and the Pussycat" get a brand new take as Edward Lear's famous poem comes to life in this video of these unlikely animal friends. Meet Fum and Gebra, a real cat, and a real owl, with a special friendship.

But first, a bit of background... Edward Lear wrote a nonsense poem (as he was apt to do) for a three year old girl named Janet Symonds. The poem was first published in 1871.

It's a love story wherein a female cat and a male owl set out to sea in a "beautiful pea-green boat." The owl plays guitar and sings to the cat about how beautiful she is, and they decide to get married. 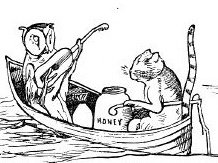 They end up buying a ring from a pig, and are married in a ceremony performed by a turkey in the "land where the Bong-tree grows."

This poem is probably Lear's most famous work. Over the years, the poem has inspired other works as well.

It has been set to music many times, and plays and books have been based on it.

My mother used to read me stories and poems when I was a kid, including Lear's work, and I always really enjoyed them. Perhaps you've read them too.

Well, now you can meet the real "owl and the pussycat!" (Something I never imagined when my mother was reading to me all those years ago.)

Fum and Gebra show off their unlikely friendship in this YouTube video...

Fum is the black cat, and Gebra is the owl. Below is a video where Fum makes a short appearance, but it's mostly of Gebra showing off her graceful flying abilities.

This is clearly an unlikely animal friendship and it always seems to me that there's the possibility for one or the other of these creatures to have a bad day! But, so far, it seems to work.

If people could get over themselves long enough, maybe we could imitate these animals and the world would certainly be a better place.

If you're not familiar with term "nonsense poetry," you probably already know what it is, or have read many examples. You just don't know you know it. :)

Many examples of nonsense can be found in Nursery rhymes. For example...

"Hey diddle, diddle,
The cat and the fiddle."

Other than nursery rhymes, the most famous examples of works of nonsense that I can think of come from Lewis Carroll (the Cheshire Cat and his friend, Alice, of course), Dr. Seuss (The Cat in the Hat), and Lear.

They often have made up words, or use words or subjects and themes in an unexpected way. For example, the literary tension of a love story with the unlikely pairing of an owl and a cat.

It's that tension, that oddness, though, that draws you into the story and gets you to think. Notice, also, that it's the cat, the female in the story who suggests marriage.

To increase the tension, the question about where to get the ring isn't immediately answered. They don't get married right away, but instead sail away for a "year and a day."

Of course, I believe this is part of what makes the Fum and Gebra story so intriguing as well. It makes you go... "hmmm." The idea that these two animals could get along so well pulls you in different directions.

Below is the text of the poem...

The Owl and the Pussycat

A poem by Edward Lear. Sources:

Edward Lear: The Owl and the Pussy-cat Translation Collection

Note: Both bompa.org and Nonsenselit.org (which appears to be moving to A Blog of Bosh) published the word as pussy-cat, where Bartlett's published it as "pussycat" which is the way I've seen it in modern dictionaries.

Below is one of Edward Lear's drawings of the owl, the cat, and the pig in the land where the Bong-tree grows....

Here's a video with some artwork set to music using the poem...

The below video is a children's animation version of the poem...

I find it interesting that many artists and thinkers, such as Lear, have been cat lovers. Throughout history, cats have often inspired music, poetry and rhyme, and literature.

If you like "The Owl and the Pussycat," you'll probably enjoy this information on cats in music and cat poems.

Oh, and if you like the idea of Fum and Gebra and odd animal pairs, you'll probably enjoy the videos showing how Cassie the kitten and Moe the crow became friends as well.