Some fun facts about cats and kittens, including an amazing story about a bird and a kitten that you have to see to believe. 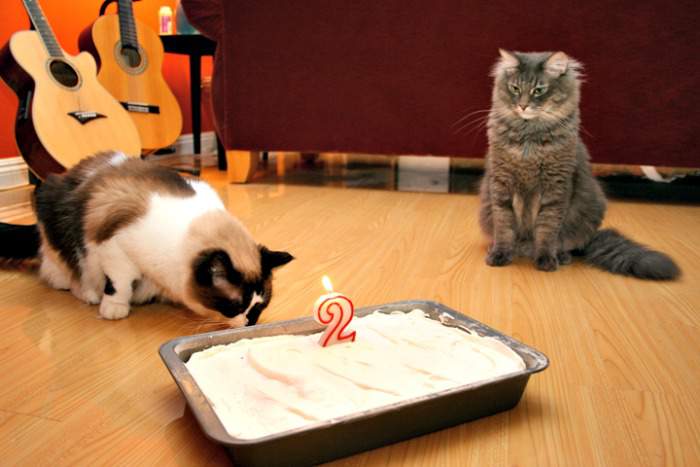 Cats are Party Animals - Five percent of cat owners have thrown their cat a birthday party.

South-Paw? - Cats can be right-pawed (40 percent), left-pawed (20 percent), or ambidextrous (40 percent), according to the book, For the Love of Cats, by Dena Harris.

I have heard from other sources, however, that as many as 50 percent of cats are right-pawed, but some claim that more cats are actually left-pawed.

Interestingly, a study done on "cat handedness" by researchers at Queen's University, Belfast showed a gender bias for these traits. Per this study, male cats tend to be left-pawed and female cats tend to be right-pawed. The study also showed that the cats were ambidextrous during simple tasks, only favoring the preferred paw when performing something more difficult.

A gem of a cat - In 1955 a cat named Ginny came limping back to her home in Keston, England. Her owner inspected her left front paw and removed what appeared to be a piece of glass. On closer inspection, the "glass" was discovered to be two diamonds worth about $600 each.

In the cat-bird seat - This story needs to be seen to be believed. I was searching around for some fun sounding cat facts and ran across this story in a book. A black-and-white kitten was found abandoned in the yard of a home in Massachusetts belonging to Ann and Wally Collito.

They named the cat Cassie and tried to win her trust. The Collitos noticed that a wild crow they nicknamed Moses ("Moe the Crow") had taken a strong interest in the kitten. When food was set out for the kitten, Moe would take the food and place it in Cassie's mouth.

In fact, the cat would only trust the crow, and the crow became the cat's surrogate mother. The crow would even try to keep the kitten out of danger by chasing her out of the street. As you can see in the video, they even wrestled with each other.

Cat hearing - In one study, 45 percent of the respondents said that their pet listens to them best, as opposed to 30 percent who chose a spouse or significant other.

Finicky Feline? - Morris the Cat of Nine Lives cat food fame would have us believe that all cats are finicky about what they eat. In the United States, however, it's estimated that cat owners spend about two billion dollars on cat food every year.

Cats can't be that finicky if they're eating that much, especially some of the junk that's on the shelves! Actually, some of that junk is made very appealing with flavor enhancers. Give us your opinion on the best cat food and take our polls.

The Cat Walk - There are only 3 animals that walk by stepping with both legs of the same side at the same time (both right legs step, then both left legs step)... the camel, the giraffe, and the cat.

Speedy Kitty - A cat can reach speeds of up to 31 miles per hour in a sprint. Are some cat breeds faster than others? Apparently so. The Egyptian Mau is generally considered to be the fastest breed.

Back Up - When cats get fixated on something they want, they are very determined animals. If you want your cat to back away from a spot, however, put your hand in front of her face to block her vision and gently nudge her backwards as you repeat "back... back..." After a few times of this, she'll get the idea and you can keep her away from things that she shouldn't get into using this technique (like that piece of chicken you just dropped on the floor).