Cat Poems And Other Tales Of Feline Rhyme

Cat poems run the gamut from classic pieces of literature to silliness. Here we'll look at some well known works, including nursery rhymes, that have been favorites for many years, and work in some silliness if we can.

In the book, For the Love of Cats they list the following lines as being from Tomas Gray's "The Tempted Cat." The Thomas Gray archive, however, shows it as being from "Ode on the Death of a Favourite Cat, Drowned in a Tub of Gold Fishes."

"Her conscious tail her joy declared,
The fair round face, the snowy beard,
the velvet of her paws,
Her coat, that with the tortoise views,
Her ears of jet, and emerald eyes,
She saw; and purred applause."
-Thomas Gray, Excerpt from The Tempted Cat
As seen in the book, For the Love of Cats by Dena Harris.

The lesson in that poem is expressed in one of the most famous sayings in use today...

"All that glitters is not gold."

Shakespeare is the most famous writer to use it, but it dates back even to before his time.

In modern renditions of Shakespeare's "The Merchant of Venice" the word used is "glitters." Back in the day, however, the word was "glisters."

In Gray's case, he used a cat going after goldfish to illustrate the point that "all that 'glisters' is not gold."

Here's the relevant part of Gray's story of the ill-fated fishing cat.

"From hence, ye beauties, undeceived,
Know, one false step is ne'er retrieved,
And be with caution bold.
Not all that tempts your wandering eyes
And heedless hearts, is lawful prize;
Nor all that glisters gold."

Nursery rhymes have been read to children for many years, and may or may not have authors attributed to them. They often have different versions, and the origins and meanings of the rhymes subject to interpretation based on locale.

High Diddle Diddle
The cat and the fiddle,
The cow jumped over the moon;
The little dog laughed
To see such craft
And the dish ran away wth the spoon.
-Anyonymous

This one is sometimes called "Pussycat, Pussycat" told like this:

While those are anony-mouse bits of nonsense, Edward Lear is well known as the author of the poem, "The Owl and the Pussycat". 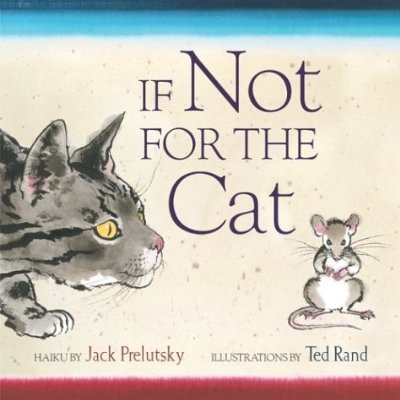 There's a book of poems using haiku poetry to teach children about animals...

Clever use of illustration and 17 haiku poems teach children about animals in a descriptive way. Despite the tabby cat pictured on the front cover, and the reference to the cat in this poem, this book is actually not about cats as the main subject.

Illustrated by Ted Rand, the book is written by Jack Prelutsky. Prelutsky is the author of over 50 books, including the bestseller, My Dog May Be a Genius.

Perhaps you've heard the children's bedtime prayer that usually starts out with...

"Now I lay me down to sleep,
I pray the Lord my soul to keep?"

Well, this is the feline version.

Now I lay me down to sleep,
I pray this cushy life to keep.
I pray for toys that look like mice,
And sofa cushions, soft and nice.
I pray for gourmet kitty snacks,
And someone nice to scratch my back,
For windowsills all warm and bright,
For shadows to explore at night.
I pray I'll always stay real cool
And keep the secret feline rule
To never tell a human that
The world is really ruled by cats!
-Author Unknown

I discovered this on the Pet Rescue by Judy Facebook page.

"Milk for the Cat" by Harold Monro.