Catnip Oil and Its Effects on Your Cat

Catnip oil comes from the catnip plant, Nepeta cataria. Catnip is an aromatic herb in the mint family. The plant is not native to North America, as some sources report.

It is native to Eurasia (Mediterranean, Southern Asia, and China). It has been consumed as a tea in Europe for many years.

It has been imported to North America and "naturalized," and now grows wild on that continent. It can be purchased in various forms, including dried, seeds, and live plants.

Cats and Catnip : What's the Connection?

The cat and catnip connection is not fully understood. Experts know that the scent of catnip oil stimulates the pleasure center of the cat's brain, eliciting what's known as the catnip response. Exactly how this happens, however, is a bit of a mystery.

Experts say that catnip is non-toxic, non-addictive, and is safe to eat. While your cat may eat it, ingestion, by itself, does not produce a reaction in cats. It is the aroma that does the trick, and causes the catnip response.

Catnip Oil : How does it work? 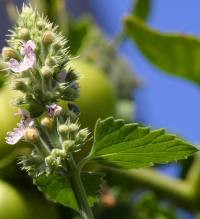 When the cat smells the aroma coming from the oil, a signal is sent to the brain and produces the catnip response.

This usually prompts the cat to rub aggressively against the source. This could be anything with catnip oil on it, such as a catnip toy, a scratching post, a catnip plant or leaves.

The Catnip Response: Your Cat Gets Happy! 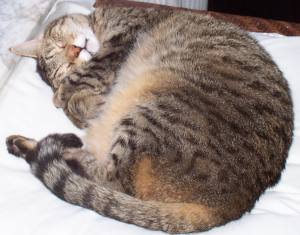 The reaction, in addition to the rubbing, can be anything from mild euphoria, to rolling, scratching, kicking, salivating, and even biting. This may be accompanied by a heavy dose of purring. The catnip response can last up to 30 minutes, but typically lasts less than ten minutes.

The propensity to be affected by catnip is genetic. Although I've heard the number two-thirds mentioned in some cases, according to most sources about 80 percent of cats react to catnip. This number has been said to be lower in certain parts of the world, such as Australia, due to the genetic pool available.

If your cat reacts to catnip, and you'd like to encourage her to use a scratching post, rubbing some dried or fresh catnip leaves, some catnip oil, or using a spray on the scratching post usually does the trick.

Using Catnip as an Attractor

Buy a catnip plant and place it in a birdcage. The leaves can protrude through the bars of the cage so your cat can chew on them and rub up against them. So, your cat can enjoy the plant but not destroy it. You'll probably have to anchor the bird cage in some way so that your cat doesn't push it all over the house or yard. You can also use the fresh leaves for your scratching board, or to freshen up a catnip toy.