Erin Pickard posted the below picture to Facebook, along with this message...

"This is my fur family. Sweetie is going to be 14 on Father's Day, Baby Kat will be 12 also on Father's Day and my only girl and the baby - Hope will be 2 on June 1st. They are all rescues and I'm super blessed to have them in my life!!!"

Erin got a lot of nice comments on her kitties from our Facebook furriends. In a follow up note, she said that she was recovering from surgery and hadn't seen her kitties in a while. 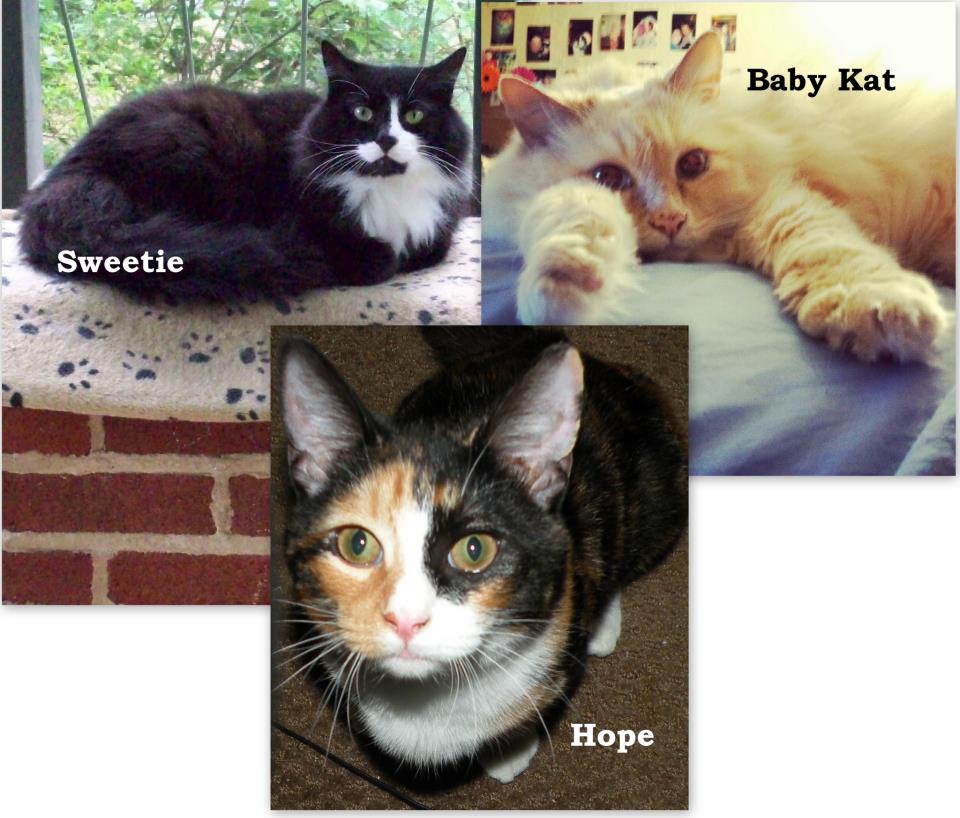 I love a good rescue story (or three) and it's always fun for cat guardians to be able to show off their cats. So, here they are, for everyone to enjoy...

Erin got Sweetie from the pound when he was 6 months old, and he will be 14 on Father's Day. He was not in good shape.

His connection to his nose/face was broken and bleeding and he had broken ribs on both sides. He was apparently either hit/kicked or both in the face and sides.

Erin said, "He still HATES men... but he has been through the worst years of my life with me so we understand each other."

Like Sweetie, Baby Kat came to her at 6 months old as well, and will be 12, also on Father's Day. Baby Kat's mother was a deaf calico, and he was the runt and the only white cat.

Erin was told that he was developmentally delayed and they were "sure he was deaf" because "his eyes *still* NEVER stop shaking." She said, "I saw this white cotton ball with BIG blue eyes & fell in love. They hated each other for the first 6 months then became brothers!"

Hope is a calico and the only girl of the bunch. Erin got Hope at 2 months old. "I have never seen a cat that small and did not know what to do with this tiny ball of energy!"

When Hope was in need, so was Erin. She was about to lose her job.

When she found out, however, that Hope was run over by a truck and was given no medical help, she was a sucker at "meow" as she put it.

This little kitty almost didn't make it, though. She had a bad reaction to her shots and she was also bleeding very badly. Erin thinks that Hope may have some spine issues due to her injuries, but that doesn't seem to rain on her spunk parade.

During the Facebook discussion, a question was raised about calicos being "a bit whacky." About Hope, Erin said she "has her moments" but that she's very smart. She gets into everything, beats up on her brother kitties, and has a bit of weird habit...

All three of these cats are thriving due to Erin's kindness and care. I wish Erin well on her recovery from surgery and I hope that she has a joyful reunion with her kitties!

Thanks, Erin, for sharing your story and the picture. I love cat rescue stories!