What may seem like strange cat behaviors can be anything from an expression of stress, to illness, to misplaced aggression to... normal!

Tell us about your cat's odd or funny habits and behavior.

Scratching is a method of scent marking, as well as a way to sharpen claws. This instinctive behavior cannot be denied, and your cat must have an outlet. Scratching relieves stress and if you try to stifle it, you'll add to your cat's stress levels.

It's fully understandable that you don't want your cat scratching the furniture. A cat scratching post, therefore, is essential for your cat's well-being and overall health.

Alternatively, you can offer a scratching board, or you can get a cat tree with a scratching post built in. Or, try something like the Ultimate Cat Scratcher Lounge.

If you're a cat owner, the litter box is one of the most important cat related items in your home. But there are some strange cat behaviors associated with this common item. Why do cats need one, why do they always use your garden when outside?

Why do they sometimes play in the box? Or Sleep in it?

House cats retain a lot of the instinctive behaviors that their cousins in the wild exhibit. One of those is to cover their tracks so that predators can't find them. This includes covering feces and urine.

It's no surprise then that cats usually prefer to eliminate on loose, sandy soil, and therefore using a litter box kind of comes naturally.

Kind of. If left to their own devices outside, cats would use many different areas to eliminate around their territory. It also comes as no surprise then that using sand boxes or garden beds for outdoor elimination is quite normal for a cat.

If garden intruders are a problem for you, there are a number of cat repellent products that you can use to keep cats out of your yard or keep your cat away from certain areas of the garden.

If your cat is experiencing litter box problems then you'll want to see this guide.

One is that some cats will "play" in the box, swishing the litter around. Teddie does this sometimes when she's constipated. If your cat is constipated, then she may exhibit this behavior, as well as coming to the box several times within a short time frame, but not successfully eliminating.

Another odd behavior is that of sleeping in the litter box. Usually, this is either an expression of extreme stress or depression, or illness. You'll often see this when cats are at a shelter and kept in cages.

Some cats will move all the litter to one side and eliminate on the flat box bottom. Frankie, who is semi-long haired will do this. This is fairly common among long haired cats.

Frankie also will place her paws on the top edge of the box and support herself on her back legs to eliminate. Some Cat Lovers Only readers have said that their cats actually stand up while urinating.

Note: If your litter box is on carpet and your cats are having box issues, then you might try moving the box to a hard flat surface.

One more odd one is that some cats like to show their superiority by leaving feces on top of the litter in the box. Not covering up completely shows that they are "top cat."

Teddie is an actress and a drama queen, and does this on occasion. She's pretty much the queen of strange cat behaviors, often sleeping inside a closed picnic basket for many hours at a time. 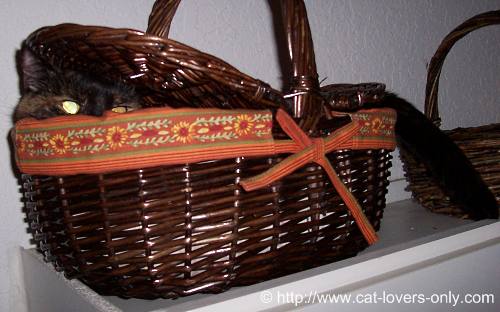 There are some strange cat behaviors involving food. As you may recall, Morris the Cat, of 9 Lives fame, is very particular about the kind of food he eats. He's "finicky" and will apparently only eat 9 Lives food.

According to his list of "likes and disklikes," Dewey, of Dewey Readmore Books fame, liked Purina Special Dinners, Dairy Flavor.

Cats may be particular about what they eat, in part, because of their sense of smell. They're very sensitive to tainted food, so the quality of food is very important to them.

Some cats exhibit a "food burying" behavior. Teddie (basket cat) does this. She'll move her paw along the floor as if to cover the food with imaginary dirt. This has been explained in several different ways.

Some say that it is a cat's way of saying that they don't like the food. That may be, but I don't buy that in Teddie's case since she does this often. If she were unhappy with the food, I'm sure she would have protested loudly, and not eaten until the food were changed. Believe me, she's not shy, and she doesn't deny herself a meal.

Another explanation is that the cat is trying to hide the food from predators or others, so that it is available for snacking later. That I believe.

Leopards often stash their prey high up in a tree for munching on later, and the food burying behavior of house cats is said to be more common in multi-cat households.

Some cats like an ice cube in their water, and others like it room temperature. Cold water can sometimes lead to stomach upset.

Sometimes, a cat will dip a paw in the water as if to test it. Teddie does this one too. Other cats will use their paws like a spoon and sip the water from it.

Note: In multi-cat households, some cats will need separate food and water bowls. If your cats share bowls and you have any emotional or behavioral problems with any of them, try giving each cat their own bowl to reduce tension.

If your cat is eating or licking strange items, she may have a vitamin deficiency. For example, the GreenPets blog addressed what seemed like an odd behavior as a cat health question concerning cats licking photographs as a possible vitamin deficiency.

One researcher has claimed to have cataloged over 100 feline vocalizations. Yowling or incessant meowing is something cats do for a number of reasons. Open a can of tuna and there is lots very insistent meowing until the fish is shared with the felines, and rightly so.

Cats will yowl for attention, or if they're upset with something. This seemingly unusual behavior may happen periodically, with no medical cause.

Cats may also yowl if they have territorial issues, say with a cat outside, and older cats may do this if they're disoriented or have dementia. Excessive yowling can also be a symptom of discomfort or illness in a cat of any age.

Call your veterinarian if your cat is doing this or if you observe other symptoms of illness in your cat of any kind.

For a while, Teddie had a nasty habit of yowling at 2 or 3 AM. She'd put a ball in her mouth and yell at me from across the house. There was nothing wrong with her except that she wanted some attention. I'd get up and play with her for a while, and she was fine. Until the next day (at 2 AM).

I was able to break her of this by first, paying more attention to her and playing fetch (one of her favorite games with either a homemade cat toy or a purchased ball-type cat toy) during my normal waking hours. And second, beginning to ignore her calls to me at night.

I think now that Teddie was trying to tell me that I needed to help her exercise (she was overweight at the time). We increased her exercise level and she got her weight back down to normal, and she stopped bugging me in the middle of the night.

Make sure you're cat has plenty of toys to keep her occupied, gets enough exercise, and give her lots of attention. This will not only cut down on the strange cat behaviors, your cat will be healthier as well.

The other side of the door is always more interesting

I want in. I want out. Cats are very territorial, and very curious. They often can't stand barriers that prevent them from exploring their territory.

I once watched a tiger at the Palm Beach Zoo do nothing but pace the perimeter of his enclosure for the entire time I was there. Cats don't like closed doors because they want the option of being able to come and go and explore their territory at will.

If your cat is expressing aggression, this could be due to illness, or it may be due to what is known as misplaced aggression. Even for a completely indoor cat, a neighborhood cat can be a threat. This is definitely one of those strange cat behaviors that is hard to pin down.

If there's a stray or neighborhood cat that encroaches on your cat's lawn, your cat may experience stress. This stress may then manifest as aggression towards another cat in the house, another pet, or even you!

Since aggressive cat behavior can be caused by either emotional or medical problems, you should make sure you have a chat with your veterinarian if this is an issue in your house.

Why do cats do that?

Share a story with us about your cat's funny, cute, interesting, or strange habits