Our cat litter box discussion continues as we cover types of litter, cleaning the box, automatic devices, and other related topics.

If you haven't read it already, you might want to start on the main page of this section of the site where we discuss the basics on types of cat boxes and proper placement, as well box size and number, and multiple and senior cat considerations.

The type of cat litter you use can make a difference... to your cat.

Ordinarily, it's been found that the majority of cats seem to respond best to clumping clay litters. 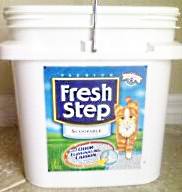 It's easy to scoop, masks smells and absorbs well, and resembles the feel of loose, sandy soil that most cat's like.

There has been a bit of controversy around clay for a couple of reasons.

One is the environmental impact aspect of the disposal of clay litter. Every time a cat owner cleans a cat litter box, they throw the soiled clay in the garbage.

All that clay that people are throwing in the garbage adds up and ends up in landfills. Another issue is that it finds its way into the waterways. If it's contaminated with parasites, such as Toxoplasma gondii, this can become a health risk for other animals and humans.

The other issue with clay comes from reports that some cats, especially kittens, were having life threatening medical problems due to clay litter mucking up their internal plumbing. There is also some talk that litters with silica dust are hard on the lungs.

From what I've read on the medical problems issue, there has been no corroborating evidence that clay litters are a definite health risk.

There are a number of alternatives to clumping clay litters. There is the more traditional clay litter, which requires a liner bag (which some cats do not like).

There are also any number of other types of litters, ranging from absorption crystals, to brands made of old newspaper and pine fibers. Some of these are marketed as flushable cat litter.

These all have their good and bad aspects, and some cats just don't take to them. Nearly 100 percent of the market still belongs to clumping clay (about 60 percent) or traditional clay (about 40 percent) litters.

If you want your cat to try these alternatives, you'll have to do some experimentation and see how it works out.

Your cat has a sensitive nose. You need to keep the box clean if you want to prevent litter box aversion. It's also healthier for you and your cat, so it's in your best interest to have the cleanest cat litter box you can have.

If you're using clumping litter, you should scoop each box at least once per day. Add new litter when needed to replace the litter you remove with each scoop. Every so often, dump all the litter, clean and dry the box, and start over with fresh litter.

This can be done every 3 to 6 weeks or so, depending box usage. When you clean the box, you can use a bleach solution for sanitizing, but make sure there are no residual bleach or detergent smells when you're done.

Cleaning the box often brings up the discussion of T. gondii and toxoplasmosis. Toxoplasmosis is a disease that you can get from your cat and is of major concern with respect to pregnancy. One of the the things you can do to reduce your risk for contracting the disease is to keep your cat indoors (so your cat doesn't get it). Another thing you can do is use an automatic litter box, such as the LitterMaid or Litter Robot.

A Brief History of Cat Litter

In the late 1940's, Edward Lowe helped a neighbor out with a problem. Her cat was leaving ash paw prints all over the house, so she asked Ed for some sand. Ed suggested instead that she try absorbent clay, and it was a hit. Ed had an idea that others would like it too.

Sand and ashes were readily available and cheap, so Lowe encouraged a pet shop owner to give away his 5 lb bags of "Kitty Litter" and people were hooked. Thus, Kitty Litter Brand was born, which eventually became Tidy Cat (or Tidy Cats) that we know today. Fresh Step and Tidy Cats are two of the most popular litter brands today.

They go by various names, including self cleaning litter box, automatic cat litter box, or simply auto, but either way, the objective is to make the task of cleaning the box easier.

While there are a number of companies using different mechanisms, they all claim to make your job easier, and/or reduce odor. Some claim to reduce cost by reducing the amount of litter used, and some even use reusable litter.

One, the Litter Robot, sort of looks like a space ship, and is an orb-like enclosed box. It's pretty cool looking, but cats that don't like covers may be put off.

It's rated for cats up to 15 lbs, so your 20 lb Maine Coon cat may not do well with it. For a while, Teddie was upwards of 15 lbs+, and she's got a long body with a long tail. Even slimmed down, she could push the limits of even an extra large box with a cover.

While some models claim you can use any clumping clay litter, others, like the LitterMaid models, require a premium clumping litter for best operation. Others require special litter. Some need to be connected to water and a toilet for drainage.

More about the automatic cat box.

Other Topics Related to the Cat Litter Box

Having cat box problems due to box aversion? Is your cat suffering from inappropriate elimination? You can post your problems and get help, or help other readers solve their problems