Caring for a cat while pregnant?

Some would have you put the cat outside, or worse, give her away. I've heard from people who've done that.

The greater risk, however, may just be from that undercooked pork chop you just ate.

Here are some things you should know about the disease known as toxoplasmosis, and pregnancy...

There seems to be a lot of controversy surrounding toxoplasmosis, pregnancy, and our favorite subject, the domestic cat. With so much flying around on the Internet, it's difficult to know what to believe.

I'd like to hopefully clear some of that up for you, as well as give you what my research tells me is solid information.

I hope that you can use the information here to balance out what you may have heard elsewhere. Always let your health care experts, and your common sense, be the final judge. 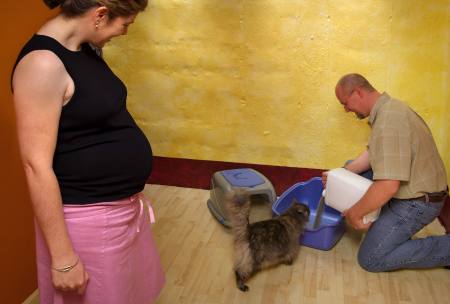 Toxoplasmosis is caused by a protozoan organism, Toxoplasma gondii (T. gondii) which can be found in most, if not all mammals. Cats (both wild and domestic) are the definitive host for T. gondii, which means that the organism reaches sexual maturity in the cat.

Essentially, this means that under certain circumstances, other animals can contract it by ingesting (accidentally or intentionally) cat feces. Animals other than cats can pass on the disease if they are infected and their meat is consumed without being properly cooked.

Toxoplasmosis, when contracted during pregnancy, can be transmitted to the unborn child (known as in utero). This can lead to miscarriages or various congenital health conditions (congenital toxoplasmosis), including blindness and mental retardation in the child if the pregnancy goes to term.

The probability of transmission from mother to fetus changes depending upon when in the pregnancy the disease is contracted. Women who have been infected at least six months prior to pregnancy will typically not transmit the disease to the fetus.

The severity of the symptoms the child will experience also vary depending upon in which trimester the mother contracts the disease. In addition, it is worth noting that some of these children are born asymptomatic, and display problems only months or years later.

So, the question is, what risk is there to pregnant women who care for cats, and what steps should one take to mitigate or avoid the risk?

The answer used to be get rid of the cat or put it outside all the time. This is the wrong answer.

You may remember the movie Nine Months, with Hugh Grant playing a reluctant father-to-be when his girlfriend, played by Julianne Moore, becomes pregnant.

The part I remember most was Robin Williams portraying the crazy Russian OB/GYN who has trouble saying toxoplasmosis, but nevertheless gets it across to Grant's character that he has to get rid of his aging cat due to the risk of toxoplasmosis.

I've heard the story about pregnant women having to give up cats before, and I used to believe it. But the truth is that the current information being distributed by the experts doesn't support that. In fact, the Humane Society of the United States says otherwise...

"Because it's difficult for cats to transmit toxoplasmosis directly to their caregivers, a pregnant woman is generally unlikely to contract the disease from her pet cat."

Notice, it doesn't say impossible, it says "unlikely." So, there are precautions you should take.

"First of all, only cats who ingest tissue cysts acquire infection. Within the feline population, this would be limited to outdoor cats who hunt and eat rodents, as well as cats who are fed raw meat by their owners."

So, it seems as though we can limit our exposure to toxoplasmosis, without getting rid of the cat. Since cats are the definitive hosts for T. gondii, it seems that they get a raw deal. But it's raw meat that we should be more worried about.

According to the University of California at Davis Office of Environmental Health and Safety, there is only a 15 day period in a cat's life where its feces are hazardous...

and, while they warn that cat feces can be an important hazard, mostly to pregnant women, they state...

"The most important step you can take to avoid toxoplasmosis is to avoid eating rare or undercooked meat - this remains the primary route of human exposure."

So what's the final answer? Well, if you're pregnant, you do NOT have to get rid of your cat or leave it outside all the time. In fact, sending your cat outdoors only increases its chances of picking up toxoplasmosis.

Since a particular set of circumstances and timing are required, it's difficult to contract toxoplasmosis from cats. That being said, one should follow the precautionary guidelines from the experts.

The following links have specific guidelines for you to follow and may help you formulate questions for your health care practitioner...

Medical References: Toxo & Pregnancy - information on toxoplasmosis and pregnancy from the March of Dimes.

For specific details on your situation, follow the advice of your health care practitioner.

See the cat illness symptoms page for more information on illnesses in cats.