The Naming Of Cats

"The Naming Of Cats is a difficult matter." The famous T.S. Eliot poem, tips on choosing cat names, and other inedible feline craziness follows.

The record breaking show, CATS the Musical by Andrew Lloyd Webber is based on a collection of poems by T.S. Eliot.

That collection was originally published in Old Possum's Book of Practical Cats in 1939.

One of those poems is entitled "The Naming Of Cats" and tells us that "a cat must have THREE DIFFERENT NAMES."

It also lists some interesting kitty monikers that some people have borrowed in the past to name their own cats. The text of that poem is below.

But first, some tips on choosing cat names. The folks over at Drs. Foster & Smith have an article by Holy Nash, DVM, on choosing a name for your kitten.

Tips include avoiding names that sound like commands or other names of people or critters in the house, keeping the name short, and using "hard" consonants and vowels.

Ever wonder what cats are thinking when they're staring off into space? Eliot's poem might just be able to answer that question. He sent this poem to his Godchildren in January of 1936.

The Naming Of Cats

The Naming Of Cats is a difficult matter,
It isn't just one of your holiday games;
You may think at first I'm as mad as a hatter
When I tell you, a cat must have THREE DIFFERENT NAMES.
First of all, there's the name that the family use daily,
Such as Peter, Augustus, Alonzo or James,
Such as Victor or Jonathan, George or Bill Bailey--
All of them sensible everyday names.
There are fancier names if you think they sound sweeter,
Some for the gentlemen, some for the dames:
Such as Plato, Admetus, Electra, Demeter--
But all of them sensible everyday names.
But I tell you, a cat needs a name that's particular,
A name that's peculiar, and more dignified,
Else how can he keep up his tail perpendicular,
Or spread out his whiskers, or cherish his pride?
Of names of this kind, I can give you a quorum,
Such as Munkustrap, Quaxo, or Coricopat,
Such as Bombalurina, or else Jellylorum--
Names that never belong to more than one cat.
But above and beyond there's still one name left over;
And that is the name that you never will guess;
The name that no human research can discover--
But THE CAT HIMSELF KNOWS, and will never confess.
When you notice a cat in profound meditation,
The reason, I tell you, is always the same:
His mind is engaged in a rapt contemplation
Of the thought, of the thought, of the thought of his name:
His ineffable effable
Effanineffable
Deep and inscrutable singular Name. 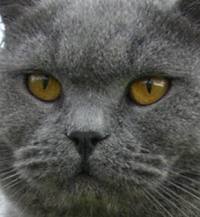 Speaking of being mad as a hatter, Lewis Carroll made the "Mad Hatter" famous in Alice's Adventures in Wonderland but the expression itself was in use before that.

One version of the story is that the grin of the cat is said to be based on the "smile" of the British Shorthair.