The Snowshoe cat breed, or Silver Laces, is a rare cat that was created in the United States from the crossing of a bicolored American Shorthair with a Siamese.

Physically, this cat is rather striking and unusual.

Its body type combines the bulky build of the American Shorthair with the longer body of the Siamese.

The coloring is of Himalayan or Siamese type with points, but with the white "gloves" and "shoes" seen on the Birman cat.

Interestingly, there is no Birman at all in the lineage!

Representative specimens of the Snowshoe cat breed have a medium-short coat, which is close lying and glossy. The paw markings should be ankle-high on the front paws, and come up to just below the hock joints on the rear legs. 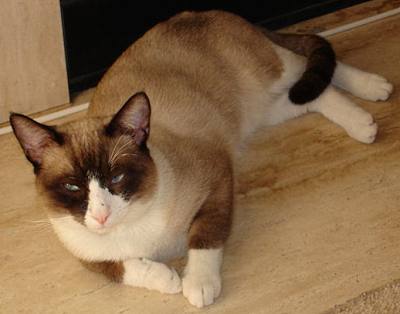 Show cats have large, sparkling blue eyes, which are oval in shape, and slanted towards the base of the ears. They have a triangular shaped head, but not as long as the modern Siamese wedge shape. The tail tapers out slightly from a thick base, and the legs are medium-boned.

These cats are medium sized with males weighing up to about 12 pounds or so. Their bodies are muscular, and they have somewhat pointed ears.

They are said to be affectionate, friendly, and intelligent. They are talkative, but have a lighter voice than their Siamese ancestors.

The origins of the Snowshoe cat breed trace back to the 1960's, when a breeder wanted to create a new breed based on white spotted cats that occasionally show up in Siamese litters.

It took until 1982 for the breed to finally be recognized by the Cat Fanciers Federation. British breeder Pat Turner formed a British breed club after seeing Snowshoes at a show in New York.

Cats with white paws tend to have problems with staining and discoloration. Washing the paws and dusting with grooming powder helps to keep them white.

Other than that, the coat is easily maintained and requires minimal grooming. Still a daily grooming session/health check is always a good idea. Most cats enjoy it.

Those who are fond of the Snowshoe say that they are engaging animals, crave human attention, and get along well with other pets. Could this be the cat for you?