Have You Seen a LaPerm Cat?

The LaPerm cat breed has a unique looking coat. Affectionate and intelligent, this cat is an excellent hunter with barn cat heritage.

Looking at the coat of the LaPerm, these kitties could be described as having a permanent bad hair day. In fact, you might even call them the bad hair day cat. 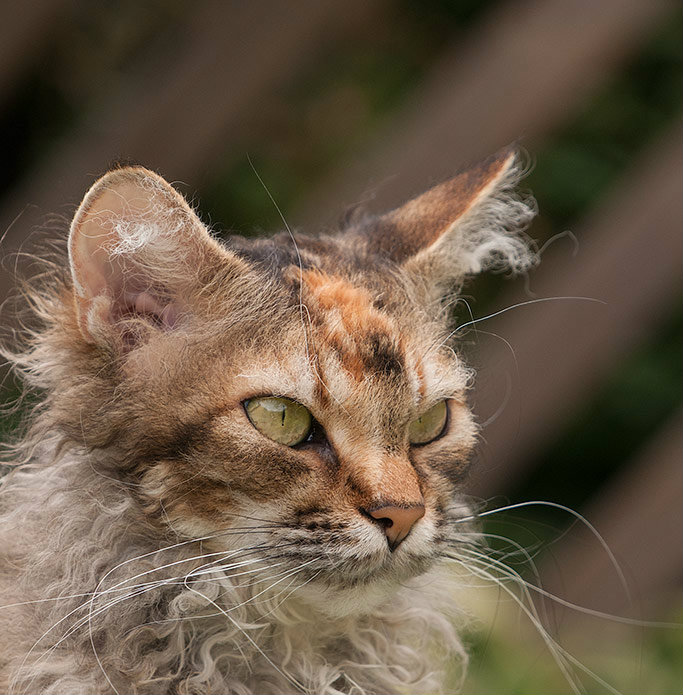 Originating in the United States in the early nineteen eighties, it is probably closely related to the Rex cat breeds. Rex cats include the Cornish Rex, the Devon Rex, and others.

Like the Rex breeds, these cats have a wavy coat, which makes them look as though their hair has been "permed." This may be where their name came from.

A combination of contradictions, this cat is definitely not your average cuddly house cat.

With a curly coat and an exotic look, you wouldn't expect them to be excellent mousers... and yet, they are.

Given their beginnings, though, this is not too surprising. While they resemble the Oriental cat breeds with an interesting hairdo, they are actually descended from American barn cats.

Is the LaPerm cat a lap kitty?

When choosing a cat, many people have a basic question, and it's a good one. It gets to the core of how the cat will behave at home.

Is this new family member going to be a gentle lap cat, or an athlete, running through the house at high speed, or maybe jumping off the refrigerator or swinging from the chandelier?

For the LaPerm, the answers is... potentially both.

This is not a feline that typically lies around all day. If you're looking for a docile, lazy kitty, that is not the LaPerm cat (a Persian might be a better choice).

Most active cats have a hard time slowing down, and when they do, they often crash. Play hard, sleep hard is their motto.

The LaPerm, however, can happily exist with a dual personality. These active little fur balls can transform themselves into lap cats, if only for a while.

This breed has a very affectionate and playful nature, and is often an excellent choice for families, especially in a multiple cat household.

If you don't want the hassle of caring for a longhair cat, fear not. This breed comes in two flavors, longhair and shorthair. As you might expect, the longhair has a graceful, plumed tail, while the shorthair's tail is more plain.

Both varieties of this cat have similar body types. Primary features include big eyes, a wedge shaped head and a muscular body. The shorthair has ears that are slightly Oriental in appearance, while the longhair has more rounded eyes.

These cats are a little on the large side, usually anywhere from eight to twelve pounds. Both flavors also have a distinct undercoat and overcoat, although the longhair has a thicker undercoat.

With barn cat heritage, it makes sense that they come in almost every color and pattern. In addition, for the first few years, they were not bred for specific types or colors. Apparently, the founding breeder did not immediately realize just how unique these cats were.

Interestingly enough as well, the founding kitten of the breed was completely bald. When the wavy coat appeared, the breeder may have just been happy to see her kitten finally grow any hair at all.

Not all kittens in this breed are hairless so young. They do all go through a stage, however, where they lose their kitten coats and have not yet developed their curly adult coats.

As with all newer cat breeds, the Cat Fancier's Association has placed the LaPerm in the Provisional Class. The breed will remain there until it proves itself, at which time the CFA will move it to the Championship Class.

A wide gene pool helps to make this breed very sturdy and healthy. You should still ensure, of course, that you give your cat regular veterinary care including immunizations.

This cat is affectionate and intelligent, and also has a very unique appearance. If you're the right person, the LaPerm cat breed could be the right cat.