Japanese Bobtail cats (JBTs) are a natural breed from Japan with a long history and a short tail.

They are active, playful, and talkative kitties, although I believe that a Siamese cat can out-talk just about anything else with fur.

Each JBT's tail is as unique to the cat that owns it as a fingerprint or nose leather pad.

Below we'll explore the origins of Japanese Bobtail cats a bit, share some photos, and show how this cat ties into Japan's history, folk lore, and pop culture.

JBTs don't suffer from any of the genetic health problems that have plagued the Manx cat, the (mostly) tailless breed from the Isle of Man.

Never completely tailless, Japanese Bobtails have all the vertebra in their tails that long tail cats have, it's just that the bones are smaller in size.

But, the JBTs are said to be every bit as spunky and mischievous as their European cousins. 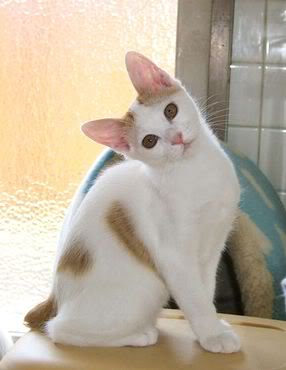 The exact origin of Japanese Bobtail cats is unclear.

It seems likely that cats with both long and short tails may have been brought to Japan from the Asian continent.

While the modern version of the breed clearly originates from Japan, bobtailed cat populations may have been more widely distributed in Asia in prior years.

Other indications are that the mutation developed in these cats after they were imported to Japan.

Short tails as a genetic mutation exist in other cat populations as well. In addition to the Manx, the American Bobtail and the Pixie Bob have short tails, although the conformation of the tails for each of these breeds is different.

The Arrival Of The Cat In Japan

Web-Japan.org, a website run by a non-government organization and sponsored by the Japanese Ministry of Foreign Affairs, says this in a discussion about the history of cats in Japan...

The first definite Japanese record of a domestic cat is found in a diary kept by the Emperor Uda (867-931). Its color was black, and from the diary it is clear that it was brought from China in 884.

Domestic cats had made their way to China from India around 1,000 BCE. Cats are often said to have been imported to Japan from either Korea or China, likely brought by Buddhist monks around 600 CE or slightly earlier.

This makes sense as the monks would find the cats valuable in guarding their written texts against damage from rodents. Traditionally, each temple would have two cats as guardians, and temple cats exist to this day.

The time frame corresponds to about the same time as an upswing in the spread of Buddhism in Japan. But, it's quite a bit earlier than that first recorded cat in 884 CE. 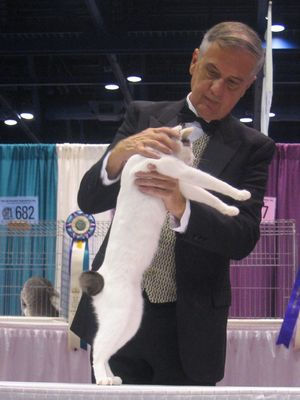 I must point out that once again, this is an example of house cats showing their usefulness as a utility animal, making their way around the world.

Cats were more than just workers, though, as Japanese aristocracy took a liking to felines and they were well protected by their owners.

Later, the cats of Japan would be released by decree. All of them!

In 1602, it became illegal to own or keep a cat so that cats could be free to guard one of Japan's most precious resources of the time... silk worm farms.

This decision had the effect of reducing the high status of the cat down to working animal. It's said that many of the street cats of Japan today are descended from these cats.

Both longhair and shorthair versions of the Japanese Bobtail have been depicted in Japanese artwork for centuries. From this we know that this breed, or something like it, has been around for a very long time. 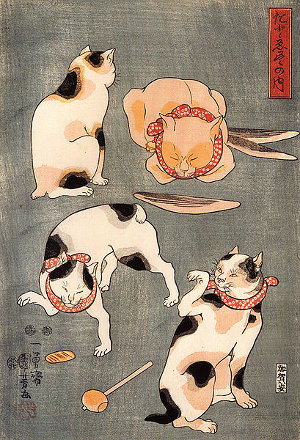 This would suggest that the genetic mutation that created the original Japanese Bobtail cats did indeed begin in Japan. I believe it's possible, however, that the sentiment of Japanese cats versus non-Japanese cats was one of national pride, rather than actual fact based on lineage.

The infamous Maneki Neko, or beckoning cat, is based on popular Japanese legends. One legend tells of a temple cat, presumably a Japanese Bobtail cat named Tama, saving a lord from death by lightning strike.

The Maneki Neko is a sculpture in the likeness of a Japanese Bobtail. They can often be seen in shops as they're said to bring luck, fortune, and customers to the owner. 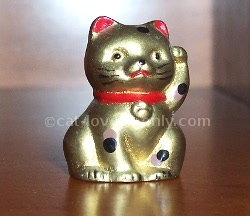 I've seen Maneki Nekos that are figurines that are just a few inches high, and others that are fairly large sculptures.

I have a few Maneki Neko figurines myself, such as this gold one pictured to the right.

Although they may come in all variety of colors, the most common depiction is of a calico cat. 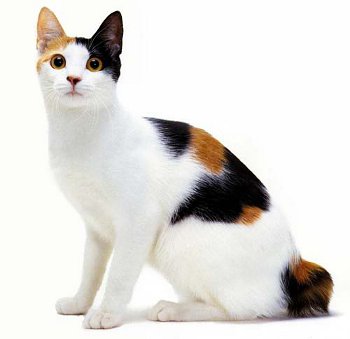 Hello Kitty, the popular cartoon cat is a pop culture icon created by the Sanrio Company of Japan. She is famous for her sayings, such as "Hello Kitty says you can never have too many friends!"

This mouth-less character from London, who loves apple pie, is said by some to be based on the Maneki Neko. Others claim she's based on the Japanese Bobtail.

As strange as it may seem, though, Hello Kitty is not a cat. This came as a shock to many of us, but she's actually a British third-grader.

Hello Kitty is also very popular in the US and other parts of the world as well, and is now a global brand.