A hidden cat litter box is probably the not so hidden desire of many a cat owner. Here are some solutions that can work to not only visibly hide the equipment, but also reduce odors and the amount of tracked litter.

There's no way around it. Your cat needs to eat and drink. Just like you, as long as your cat eats and drinks, she's going to need a toilet. I'm betting that your toilet is hidden behind closed doors.

Well, thanks to cats becoming so popular, now you can create any number of hidden litter box options in your house. Many of these will keep most dogs out of the litter box as well. If that's a problem at your house, then you just might have found your dog-proof box in one of these solutions.

Note: Over the years, I've had hundreds of requests for help in solving litter box problems. As a result, I've become less of a fan of hiding the box, or even covered boxes.

While there are some exceptions, in most cases, it complicates things and makes things more difficult for the cat in one way or another. Hiding the box inside a piece of furniture might look better on the outside, and it might keep odors from reaching out and touching someone's nose in the living room, but it's what's going on inside the box that matters most.

If you trap odors in the box, your cat, at some point, may decide that this smelly box isn't clean enough, and that may mean she'll do her business elsewhere. Perhaps on the rug, or on the tile.

The same holds true if space is too tight, something I've seen all too often with simple, covered boxes. No matter how big the box is, the lid is confining, and doesn't allow an adult cat to turn around easily.

Yes, I know, the come back to that is that cats are made of liquid, and they can jam themselves into jars... and turn around just fine. That's true, but that's not a guarantee that your cat will enjoy the experience of sandwiching herself into the litter box to poop!

There's also the matter of injured or aging cats, where mobility is a problem and getting in and out of some of these furniture-like contraptions is just too much for the kitty.

Obviously, it's up to you. Of course, I'd rather see a cat adopted into a home and out of a shelter than stuck in those cages. I'd rather see kitties rescued from the streets and lounging on the sofa, than scrounging for food.

If hiding the box is what it takes to give a cat a home, well, then, I can't very well argue with that.

And so, with that little warning (OK, rant) out of the way, let's continue...

While this may not be the most attractive piece of furniture ever created, it's certainly effective as hidden cat litter box furniture goes.

This is a "hide in plain sight" solution. The creators of this product came up with it in order to solve litter problems with their own cats. It worked so well they patented it.

It makes use of vertical space, cuts down on litter tracking, and odors. It's made of acrylic and plastic materials rather than wood, so it's easily cleaned by washing. It's large enough to hold a jumbo size litter pan, and the (patented) GRID system gets the litter of your cat's paws to help prevent tracking.

Your cat will have to jump 18" to get into the unit, then drop down into the box and back up to get out. There is a training process that may have to take place with cats that aren't curious enough or are too timid to enter the box on their own.

Another concern would be in multiple cat households when the box is occupied and another cat wants to get in. It's possible that conflicts may develop, but then again, you should have more than one litter box for multiple cats (following the one plus one rule, there is always at least one box free).

My final concern with this piece would be for cats that are mobility challenged. This would include younger kittens (get them trained on regular boxes first, then introduce this when they get a bit older and have the hang of things). Also included in this group are older cats and cats with injuries or illness. Make sure you provide the solution that is best for your cat.

The Good Pet Stuff Hidden Cat Litter Box is a combination cat box and decorative planter. This item is made of polypropylene, but looks like a real clay pot.

The filter and venting control dust and odor. You can turn the opening towards a corner of the room, and no one will know it's a cat box.

It's decorative, but the style may not appeal to some. As with any covered cat box, some cats may not take to it. 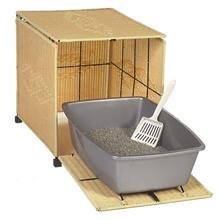 This is a decorative solution. This piece looks good and offers another "hide in plain sight" solution for a hidden cat litter box.

It has a tray on the bottom to help catch some of the litter scatter. If offers front panel access and the box slides out on rails for cleaning.

The base is elevated and the feet protect your floor. With the weight of the litter and the box, your cat won't be able to move the unit around.

The Rhino-Wicker is decorative and durable. It won't absorb moisture or odors, and the weave means it's vented so it won't trap odors inside as much (a main issue for cats with covered litter boxes). It also provides privacy for your cat, yet allows some visibility. It comes in either a light or dark color to match your preference and fit your decor. 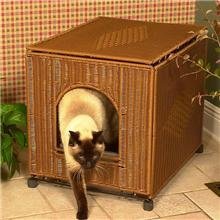 This (and the Midwest Hide-a-Way box cover product) may be one of the best hidden cat litter box solutions for a number of reasons.

While it won't prevent litter tracking as well as some, it's open and accessible enough that you shouldn't have to retrain your cat.

Also, timid cats probably won't be afraid to venture inside. If you have multiple cats, it's easy enough for one cat to see when another cat is using the facilities.

The cat that is using it can see others coming. It won't trap odors inside as much as some other models, so hopefully, your cat's nose won't be offended. Finally, it's easy to get to the box to clean it.

Catsplay has a great selection of all types of cat furniture.

Other Topics Related to the Hidden Cat Litter Box