Say meow to the featured cats for August, 2013. These pictures were all contributed by visitors who want to show off their babies. Enjoy and show them some love!

Katharina Satava calls Princess "the silky beauty." I love the dark stripes on her "arms" and the white on her nose.

Holly Stapledon says that Piper is a seven month old Birman, and to me, she sounds like quite the character!

"She's completely crazy and climbs everything she possibly can meaning that we often find her holding on to the top of the blinds."

"Her favorite thing to do is steal our things, especially the toilet paper which she keeps in a pile under my bed. She also steals pillows and foods such as pizza and candy. She has three teddies that she carries around with her."

"She is the biggest baby and cries if you leave the room or nobody is holding her. Her favorite food is pizza and will go to any lengths in order to get some." 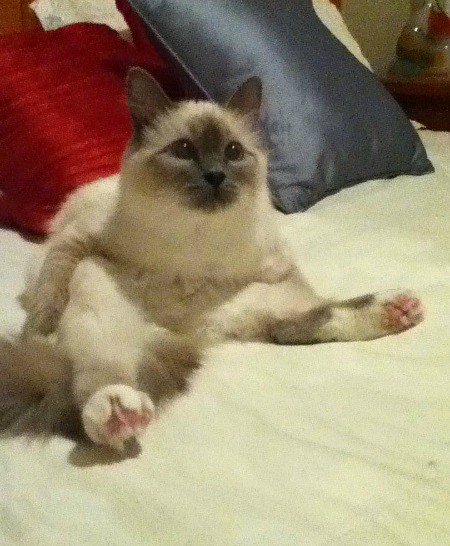 Navarat Pinkulabut says that orange tabby Som (Thai for orange) and white kitty Somwang (meaning fulfilling the family's hope) are too cute not to share.

"...they are in Thailand and growing as precious to their family" and they are each other's beloved toy. 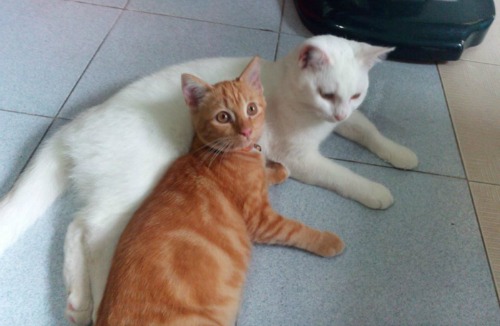 A Talker and a Shaker

"Just wanted to send you guys a picture of my special wee boy, who was adopted from the SPCA Canterbury, New Zealand. He has appeared in the local news paper, loves car rides and visiting the elderly in rest homes, it brightens their day."

"Just trying to show that every cat deserves a home, no matter how old, how little fur or in Oscar's case, a tooth sticking out. And also trying to raise awareness for animals that need forever homes!" 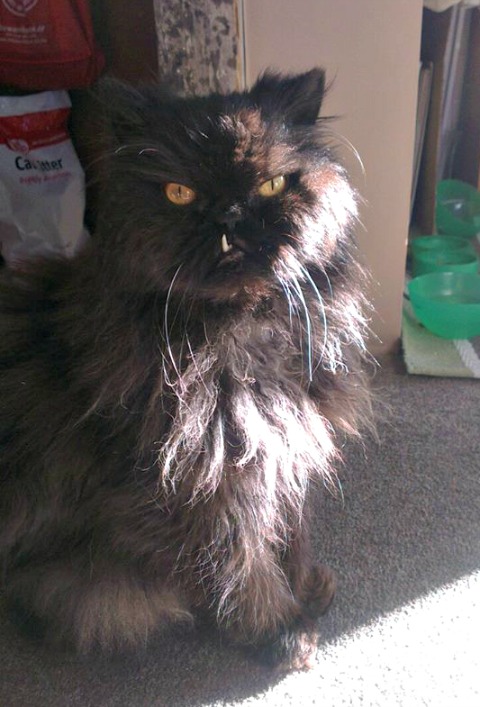 Tara Reeve's Icarus is a 6 year old British shorthair. She says, "He loves to be brushed and is extremely affectionate. He loves to lay in the sun on the kitty hammock."

He was born not breathing, and had to be given CPR to get him breathing again. 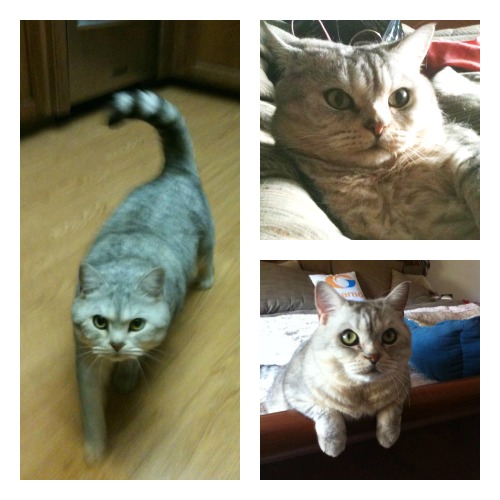 Yoda Had a Rough Start

Trish Rathey says that she has a big heart for cats and that it's unfair that a kitten had to start life out this way..

"Either someone put her on our porch or she crawled under our door soaking wet like someone tried to drown her. She is nothing but fur and bones. Bald spots on her head and behind the ears.

She has really bad ear mites and fleas like you wouldn't believe. She is nothing but a sweet heart. Can't be older then 8 or 9 weeks. Cameron and I are doing the best we can to get her from the brink of death. I hope it works cause if not I will be very upset.

I have come up with a name... yoda... cause she is bald and looks funny. She has a vet appointment friday at 3. The first 24 hours were hard on her. Everytime she ate she would freak out and growl at the food and I would have to take a wash cloth to her face and clean her face off.

She wouldn't drink water or milk so I had an idea to use a straw and slowly give her water or milk. Now she is doing a lot better, eating on her own and very very jumpy, playful, and my other two cats just love her. Will know more after her vet appoinment." 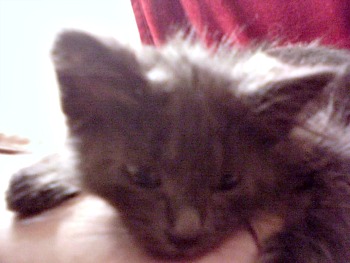 "Update... Yoda is not 8 weeks, she is 16 weeks. She is very underdeveloped. The vet was surprised on how small she is. She has worms so she and my other two cats are all getting dewormed.

Fleas are gone, still has ear mites but one treatment won't kill them all in one night. She got her distemper shot. Now when I can afford to get her the shots and spayed I will."

Annuuaarr Ar adopted Ringo when he was a "thin and messy" 3 month old kitten suffering from mal-nutrition. Ringo got a bath, some good food, and a vet visit where he was vaccinated and dewormed.

He's a year and a half old now, and despite the fact that he hides under the bed when there's thunder, I'd say he's looking good! 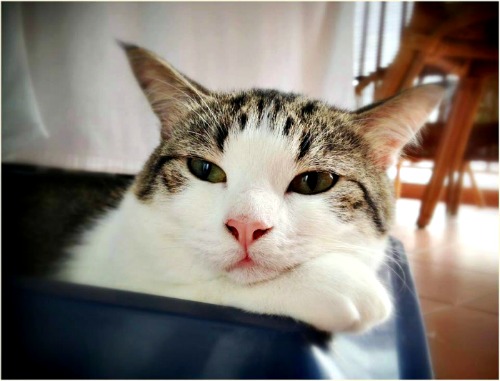 You Had Me at Meow

"I had adopted him at an animal shelter in Key Largo, FL. I knew at first meow it was meant to be! He mostly likes to hang out under window sills, loves some cat nip every now and then... he's not shy at all--he loves a good belly rub and he's definitely a talker!"

"He's all white and loves laying on white things like blankets and even paper. He kneads almost 24/7 and he can hear the treat canister from a mile away! He's my first fur baby and he makes life so wonderful." 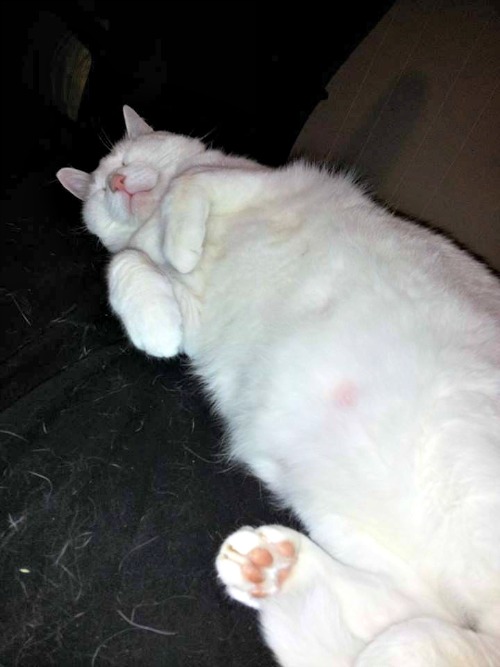 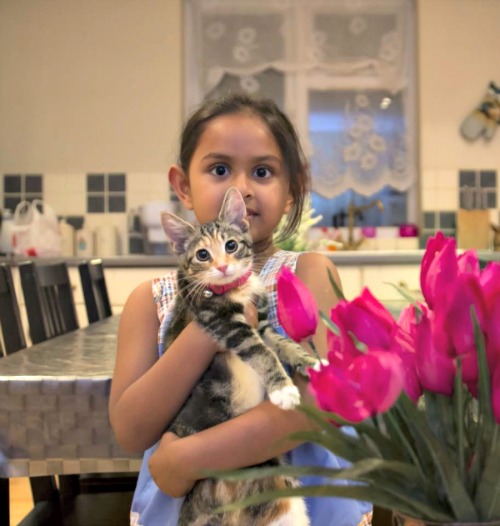 "Norman is just over a year old. He loves to sun himself on the windowsills. I think his FAVORITE thing is dinnertime. Not his, but ours!

Norman sits at our feet and waits ever so patiently for handouts as you might see a dog do. He is wacky and aloof, his habits include 6 AM sprints through the house at break neck speeds, pupils huge and ears pinned back! LOL!

I think his favorite spot would be in my lap (he IS a momma's boy). We met when he was just a few weeks old and feral in my mother in law's back yard. I scooped him and his sisters up and fostered them and they have turned out to be pretty nifty kitties!" 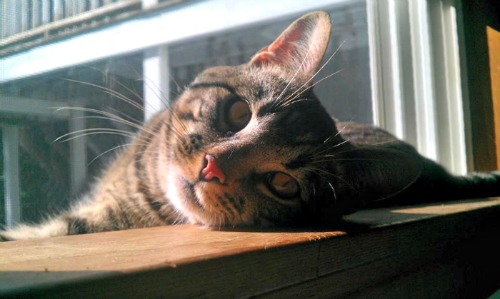 I almost forgot to add that Norman was named after Norman Bates, the character in the move Psycho. "Aptly named for his moments of absolute psychotic behavior, and his CRAZY mother attachment issues."