A Cat Drinking Water And The Science of Lapping (Videos)

Despite my warnings to her about chlorine being bad for kitties, Teddie would lap water from the pool, with her water bowl filled with filtered water not more than 20 feet away.

Have you ever watched a cat drinking water from the bowl (or a pond or pool)? I mean, really paid attention to how they lap up the liquid?

It doesn't look very efficient, as much of the water falls back into the bowl. But apparently, as with many things in nature, there's more to it than that.

Now, I'm fascinated by sandpaper tongues. It's weird, I know, but it's such an interesting and useful tool. And every cat has one built in!

I suppose that makes all cats... lap cats. Of a different kind.

Obviously, when they want to take a drink, cats don't pour water into their mouths like humans do. In fact, since both cats and dogs drink with their heads down, lapping with their tongues, they have to overcome gravity in order get a drink.

But, it turns out that scientists have discovered that dogs and cats, despite having a similar physiology and gravity challenges, drink liquids in different ways.

To get a good look at the lapping action of a feline, here's a super slow motion video of a cat drinking water from a glass bowl...

Anyone who has ever been licked by a cat knows about the barbs or ridges on the tongue, giving that sandpaper feel. In thinking about it, though, I never really thought much about the mechanics of how they drink.

They lap so fast that I just assumed they used their tongues like a cup. With as much time as I've spent with cats, you'd think I would have paid more attention.

Not to worry, though, as a couple of scientists are on the case, and working to demystify the process for us.

Pedro Reis and Roman Stocker of the Massachusetts Institute of Technology (MIT) studied how cats drink liquids, and apparently cats maximize the volume of liquid ingested through lapping frequency.

Of course, cats are secretive by nature, and aren't going to reveal their secret lapping formula to anyone.

And, because cats are, ahem, somewhat difficult to negotiate with, Reis and Stocker developed a robotic cat tongue simulator in order to test and measure how cats drink.

Reis and Stocker also came up with a way to predict, mathematically, how "lapping frequency changes with feline mass." This theory predicts that "larger felines should lap more slowly."

Watch on YouTube: Joseph the lion drinking in slow motion

Cats tend to let the tip of the tongue touch the water and then pull it back, creating a column of water as mentioned in the above video. Dogs, on the other paw, dunk their tongues much deeper into the water, and use more of a ladle technique, which can be seen in this time warp video of a dog drinking water...

Below is a video (time warp) of a drinking cat. This cat, however, is drinking falling water from a faucet, not still water in a bowl.

Many house cats actually prefer to drink water that is either falling or moving. This makes sense because it stands to reason that still water is not as fresh as moving water.

Since many cats don't drink enough water, and chronic kidney disease is very common in elderly cats, it may be beneficial to provide moving water for your cat.

This drives some cat owners a bit batty, though, because their cats have trained them to turn on the faucet for them when they want a drink.

If your cat has a faucet habit, or if you just want to know how to get your cat to drink more water, try a drinking fountain type product that creates moving water.

Notice in the video below that this cat has his head and tongue parallel to the ground because he's drinking the falling water, yet his tongue is still in the capital "J" shape that it would be in if he were drinking from a bowl or a stream.

On a more practical note... should your cat drink tap water?

I know there's all kinds of controversy over tap water and it's impact on both human and pet health. I also know that some people say their cats won't drink tap water, yet others seem to prefer it.

It's often stated that regulations on bottle water are lacking, and there's no guarantee that what's in the bottle isn't simply tap water.

I've always given my cats filtered water and refreshed the bowl a couple of times a day, but I know there are varying opinions on tap water vs. reverse osmosis vs. distilled vs. bottled, and so on.

There are many stories of people who say their cats will only drink from the faucet as well. And then there's Woody and his unusual drinking style. 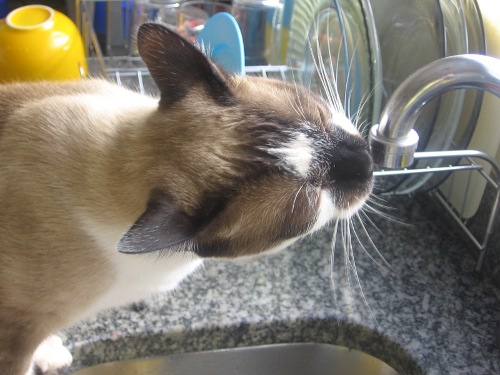 What kind of water do you give your cat? Does your cat prefer a particular type?

Does your cat drink only moving water?