Here we continue our discussion on domestic cat behaviors.

As usual, your little feline friend's motives are driven by wild instincts.

If you understand some of the reasons behind why your cat does what she does, or wants what she wants, you can provide better cat care.

Learning about the optimal environment that your cat requires will help you to set up a better living environment for your cat.

Cat talk is an interesting subject, although much of what a cat says is actually non-verbal. Even so, cats are said to have many more vocal sounds than dogs, and one researcher claimed to have isolated at least 100 different sounds in the domestic cat. I think I've heard 50 or so of them myself, and you probably have too.

Translating those cat sounds into what your cat is thinking is another matter, but some researchers have tried. Many cat owners, however, have learned to understand at least some of what their cats are saying with their various purrs, meows, mews, and yowls.

Cats also growl, although it's often a rather quiet growl. Priscilla often gives a low growl when she's not happy (such as when unexpected guests show up).

Many people talk to their cats, and often, their cats talk back. Some breeds, such as the Siamese, seem to be more talkative than others. All of my cats have always been rather talkative and are often receptive to having a conversation.

Some cats will produce various meow sounds in protest and make it clear. Others are sometimes hard to tell. This very talkative Siamese cat in the video below demonstrates... what...

Cats rarely meow at each other. Cat-to-cat communication is largely non-verbal, although aggressive behavior between cats may include hissing, spitting, and sometimes either some yowling or some short loud vocalizations.

Most of the time, however, the position and movement of a cat's body and all of its parts tell more of a story than anything.

I have personally seen two cats having a territorial dispute that stalls for a while in a stand-off. The two cats will stare each other down until either a fight ensues, or one backs down. A cat fight is a dangerous affair and each cat can be badly hurt.

If the staring goes on long enough, sometimes one or both cats will begin yowling at each other. This can go on for a very long time, and more often than not the intruder will back down instead of risking injury in a fight.

The cat who decides to back down has to be very careful. This is one of those unusual cat behaviors and it's hard to tell what's going on. There aren't a lot of "surrender" signals here. If he doesn't back away fast enough, the other cat may attack. If he moves away too quickly, the other cat may chase him and attack.

Although in cases like the "surrender scenario" above cats don't have a lot of options for indicating certain feelings or intentions, cat body language can be quite expressive. Non-verbal feline behavior is the primary method of speaking "felinese" and is used to communicate with both humans and other animals. 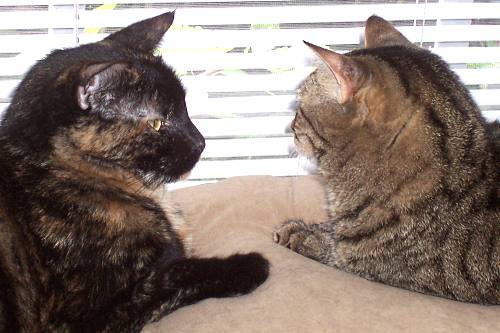 In the above photo, Priscilla (R) and Teddie are enjoying time with each other by the window. As you can see by their body language, both cats are very relaxed and comfortable here. Ears are forward, whiskers and facial expressions are relaxed, and paws are semi-tucked in. Lying down so close together, both cats are vulnerable to attack, since it's difficult to spring into action from this pose if needed.

Feral cats are domestic cats that live "wild" either on the streets in urban areas, or in the country in rural areas. Barn cats or farm cats are sometimes considered by some to be feral, although technically, feral cats are not tame.

At its core, though, feral cat behavior is not all that different from domestic cat behavior. The same instincts to hunt and protect a territory are there either way.

Feral cats often live together in loose colonies, wherever there is adequate shelter and food nearby. In some areas, people often feed feral cats.

Farm and barn cats help keep the pest population down, and have a similar relationship with humans today that the Egyptians had with their cats several thousand years ago. The cats take care of rodents, and in return they get steady food and a protected place to stay.

Felines are fastidiously clean creatures, and the self-grooming process is one of the most fascinating of all cat behaviors. Cats spend about two-thirds of their waking lives grooming themselves.

During the grooming process, cats will use their teeth and claws to untangle matted coats, and remove parasites and burrs in the fur. The barbed tongue is used to wash and comb the fur they can reach with it. For other areas, such as the top of the head, ears, and face, a paw will be dampened with the tongue and then used with a wiping motion. This is called the "face cloth."

Cats may lick themselves rapidly in order to relieve stress. You'll sometimes see this right after your cat has been running around the house, or engaging in play. Cats may over-groom when ill or stressed, to the point where they lick or bite the skin raw or create an open wound.

As cats get older, they may need help grooming. Mobility and flexibility problems can prevent your cat from reaching all the areas. Getting your cat used to grooming sessions early on in life will help her to accept it when you need to do more of the work for her.

Cat and dog behavior patterns, and more importantly, their motivations, have quite a few differences. Dogs have a pack mentality and form a different kind of hierarchy than that of cats.

You can train a dog by setting yourself up as the alpha dog in the pack. As the alpha dog, your dog will want to please you in the spirit of pack cooperation. This makes training a dog relatively easy in many cases.

Cats on the other hand are primarily solitary creatures, and do not have a pack mentality. Although cooperative hunting has been observed in feral domestic cat colonies as well as house cats, the hierarchy that cats form is mainly based on territorial supremacy.

Cat training, therefore, is perceived as difficult, if not impossible by many. Because of this, cats are also sometimes thought to be less intelligent than dogs. This is obviously not true, since many cats have been trained as performers for television and movies. Anyone who has ever been to Disney World and seen the animal shows can see that cats are highly trainable.

Although some may want to teach their cats tricks, most of the cat behavior training that the average cat owner is interested in is really simply behavior modification. Most cat owners want to keep their cat's behaviors in line to create a more harmonious household.

Keeping cats off of kitchen counters or out of cabinets are a common concern, as are litter box problems. But most of these issues can be resolved by thinking more like a cat and figuring out what your cat wants and needs. Litter box training and retraining for example, is often a matter of appealing to your cat's natural instincts and setting up the right environment.

Cats can learn their names and will respond to them. They can often learn verbal commands, such as coming when called, and words like "up" and "get down." All of this can be very useful. The word "tuna" is easily learned (although that might not be very useful!).

Some have said that cats will only respond to food, but this is not true. Common techniques for modifying your cat's behaviors around the house include verbal reprimands (which must be immediately done when the bad act is performed), verbal and physical praise (for good behavior), and spray bottles with water (which should be done along with verbal reprimands). Food training is sometimes used as well.

The use of a spray bottle can often backfire and only some cats will respond well to it. I don't recommend it.

One of my readers had a situation where one of her family members was using a spray bottle on her cat. This particular cat did not respond well to this behavior modification technique, and the cat ended up with an inappropriate elimination problem.

Some of the key cat training methods used by trainers involve food training and clicker training, often using a wand to lead the cat's movement. As with the modification of all cat behaviors, consistency is key, as is treating the cat you wish to train with kindness.

Trainers will often use a reward of food combined with a "clicker device" that makes a clicking noise when the cat performs the desired behavior. Soon, the cat learns to associate a pleasurable experience with the clicking sounds, and along with it, the desired behavior. Cats can be trained to perform many complex tasks using this method, and it can also be used to stop bad behaviors.

Cat Care depends on meeting your your cat's needs. Understanding the cat behaviors above can help you meet those needs. Always remember that, while each cat has their own distinct personality, a lot of what your cat does is instinct driven.

Using behavior modification techniques (rather than human oriented punishment methods) that play to your cat's natural behaviors is the way to a better relationship with your cat.

Other Topics Related to Cat Behaviors

In this article, we cover some basic domestic cat behavior topics such as hunting, territory, and marking behaviors.