In What is my cat thinking?, animal behaviorist Gwen Bailey lays out many of the common feline behaviors and what they mean. In writing the book, she stands up for the rights of domestic cats and hopes that people will gain a greater understanding of the needs of their feline companions. 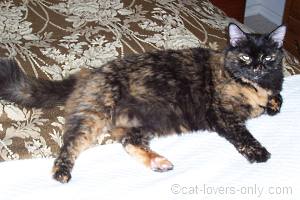 Back legs extended and belly exposed to the side, Frankie displays a relaxed pose.

Cats communicate how they feel, what they want, and what their intentions are in a number of different ways, both verbally and non-verbally.

We can't always know for certain how to interpret what our cats are trying to say with their bodies, or even with their meows. To the observer in the know, however, interpreting a combination of cat body language, behavior, and verbal queues can often tell a story of how a cat is feeling.

According to Gwen Bailey, there aren't many scientific studies on domestic cat body language, so we rely on experience and observations by experts, combined with what we ourselves observe.

We're all familiar with the flick of the tail, the pinning back of the ears, the arch of the back, and the showing of teeth. These are very recognizable and universally feline expressions. As cat owners, we also become accustomed to the unique ways in which each cat uniquely expresses various states of pleasure, need, contentment, hunger, and so on.

A better understanding of cat body language can assist in training your cat. Cats can be trained to display many useful behaviors and come when called, sit, stay, open doors, and perform tricks.

Below are some descriptions of feline body language and actions.

Playtime Tip: If your cat has gotten out of the play habit, follow these tips to stimulate her interest: 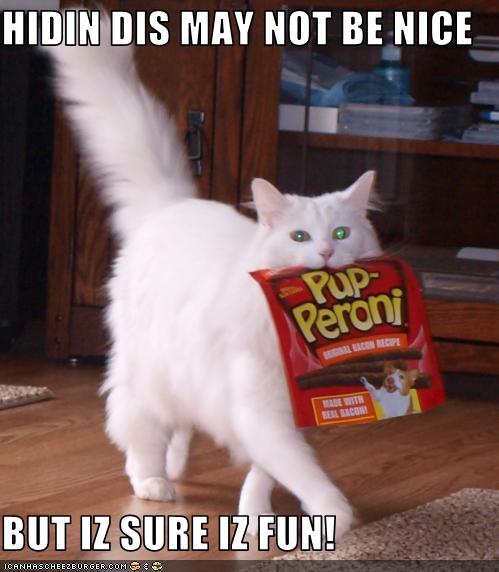 Domestic cats may sometimes walk with their tails up, while wild cats will lower them as they stroll along, sometimes keeping them between their legs. A straight up tail, sometimes quivering with excitement, means "I'm happy to see you," while a curl on the end means "I'm top cat."

Below, we show Teddie in some various pictures, also with Frankie and Priscilla, to illustrate some examples of the body language used by the domestic cat. 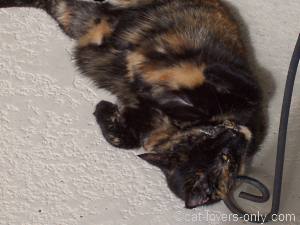 In this photo, Teddie has fun on the patio and exposes her belly while scenting the leg of a planter with her cheek.

She's scenting things up to claim ownership, and at the same time, showing me her belly in submission.

For a cat, the exposed belly is the ultimate sign of trust.

Some cats will be willing to expose it, but recoil and have a scratching or biting response when it's touched. Don't take it personally, it's just a cat thing! 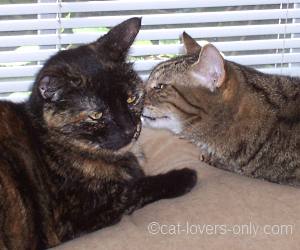 Priscilla (R) checks Teddie with a sniff as they relax and bird watch by the window.

Cats have amazing noses, and by taking in another cat's scent, they can tell where the other cat has been, and how they're doing.

Face to face encounters like this require a great deal of trust.

Nose to nose in this way, either cat is vulnerable to serious injury by the other should one of them attack. 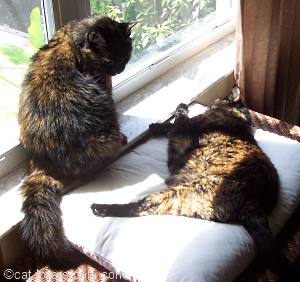 You're in my light

Teddie (R) shows with her body language that she's totally relaxed and literally open, exposing the vital belly area, even though her sister, Frankie looms over her.

Teddie wouldn't be so nonchalant around a cat she didn't trust, but here, she doesn't seem to be at all interested in what Frankie is up to.

I believe Frankie was actually hunting a bug of some kind, but her sister was not impressed.