Looking For A Natural Flea Killer?

Natural flea killer is in demand, as cat parents join the green movement and try to reduce the toxins that their cats are exposed to every day.

And, unfortunately, there are lots of toxins.

More and more, cat people want a green lifestyle and are taking steps to "green their cat."

We want our pets to be safe from fleas and other pests. But...

We don't want our pets to be exposed to nasty chemicals that are reportedly causing diseases and shorter lifespans.

We want our homes to be green, and we want to use safe products.

But, what about fleas and flea treatments?

Spot on flea treatments are advertised everywhere, but they're being looked at with a skeptical eye, and they're perhaps not as effective as we'd like.

The good news is, there are natural flea killer solutions that are considered safe for pets, and greening your cat doesn't mean you have to suffer from flea infestations.

Did you know that ants kill fleas? We usually try to get rid of ants, but ironically, ants are a type of natural flea killer.

They feed on flea eggs. Ants aren't practical, however, for natural flea control.

But that brings up a simple question...

Is there a parasite that feeds on fleas that we could use to naturally control their numbers?

Answer: yes, they're called nematodes, and we'll talk more about them below.

The traditional approach to flea control is to use chemical insecticides and growth inhibitors to stop the infestation. This usually involves treating your home and your cat with chemicals.

A good flea control program involves a multi-pronged approach, including treating the outdoors as well, again, usually with chemical insecticide.

If your cat goes outdoors, if you have other animals that go outdoors, or if there are stray or neighbor animals that visit your yard, treating the outdoors becomes even more important. It's also possible to drag fleas or flea eggs into the house on your clothing or other objects.

Besides ants, another type of natural flea killer is a parasite, the beneficial nematode. Many gardeners successfully use nematodes to control many kinds of garden pests.

Beneficial nematodes are microscopic worms (the "good" kind of roundworms) that are natural predators of fleas. They're also called insect parasitic nematodes or insecticidal nematodes, and sometimes written up in company literature as "flea control" nematodes.

You can purchase them from organic garden shops, nurseries, or online. They're kept in the refrigerator until ready to use. Then, you mix them with water and apply them to your lawn with a garden hose sprayer, hand-held sprayer, or watering can.

So how do beneficial nematodes kill fleas? They destroy fleas by entering the larva, which lives in the soil. You see, before you ever see them and before they can jump, fleas are crawling around in the soil outside.

Flea control nematodes will seek out immature fleas in the soil and kill the fleas before they become adults, so they can't bite or breed. They enter the body of the flea, release bacteria, and essentially disintegrate it from the inside out within about 48 hours.

When applied to the soil, they immediately start seeking out insects to attack. They mature, breed and lay eggs, so they're self-propagating.

They not only act as a natural flea killer, but they can attack and control many other kinds of pests. They're non toxic and won't harm humans or pets, and can also be used on foliage and in garden beds.

Sounds great, right? Well, there are some things you should know with respect to usage and effectiveness (you can read up on them here):

Beneficial nematodes work for the outside of the house, but flea eggs and larva aren't just outside the home, of course. Fleas lay eggs on the host (your cat), and those eggs drop off of the animal and land on carpets, floors, pet bedding, and so on.

You can also bring fleas and eggs inside on clothing and shopping bags without knowing it. They make their way into cracks and crevices and you won't even know they're there. Let's look at a non-toxic solution that can work inside the house.

You can buy beneficial nematodes from Amazon. 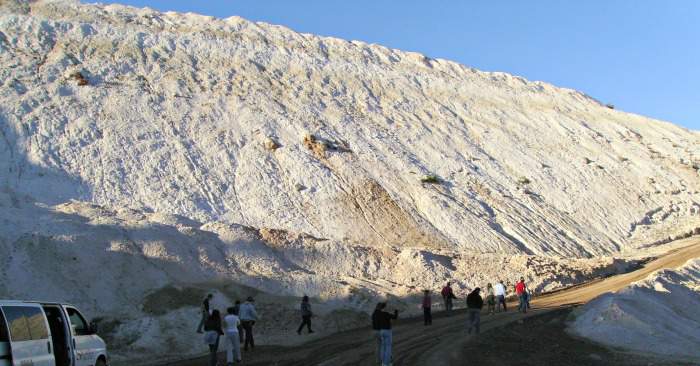 Diatomite mine in Northern California
Photo credit: Alisha Vargas on Flickr via CC BY 2.0

Insects wear their skeletons on the outside of their bodies. To get around that hard shell of the insect, nematodes utilize a Trojan Horse-like method of entering the host and destroying it with bacteria from the inside.

Diatomaceous earth (DE) is another natural flea killer, but unlike netamodes, it attacks the exoskeleton itself, causing the insect to die of dehydration.

In the 1960's, the US Department of Agriculture tested the effectiveness of diatomaceous earth as a non-toxic insecticide, and found that it was an effective alternative to chemical pesticides, such as malathion, with none of the dangers.

Diatomaceous earth is made from the fossilized remains of diatoms, a type of single-celled algae. There are several types of DE, including salt water derived, fresh water derived, and food grade. It has many uses.

It's used as a filtering agent for water, wine and beer. Years ago, I lived in a house with a DE pool filter. Food grade DE is approved as an animal feed additive and is sold as a dietary supplement as well.

It's used as an anti-caking agent and insecticide in grain storage. Some toothpastes and metal polishes contain DE as a mild abrasive. Some people claim that when taken internally, it's an effective de-wormer, but this claim has been refuted.

As a natural flea killer, food grade DE is safe for pets and non-toxic, so you can actually use it in cabinets where food is kept, and, important for our discussion, where your pet spends time.

Sprinkle a fine layer on freshly vacuumed carpet. Place a small amount of DE powder in corners, cracks, and crevices. You can also remove wall plates and use a turkey baster to blast any insects behind the wall.

Note: You should use a mask when applying DE, and remove all animals from the area as it is dusty and the dust should not get into the lungs. Due to the type of silica contained in food grade DE, the dust is supposedly safe. (Non-food grade DE should never be breathed in.)

But, if you, your pet, or your family members have asthma or any other respiratory problems, you may want to avoid it.

This can be quite the messy project, so don't go the DE route unless you're prepared for a dirt-fest. Although researchers and the distributors of DE products say you can use it indoors, Dr. John Heinerman (in Low Cost Natural Cures for your Dog and Cat) said to only to use it outdoors.

Some recommend dusting your pet with it. I initially said I'd never do that, but it's been recommended by a number of people. Still, I would be careful with this due to the dust content. As always, check with your vet before using any products just to be sure.

You can use DE as a barrier to prevent insects from entering the home from outside. Place the powder around the entire perimeter of the home. Be aware that it also kills beneficial insects as well as the unwanted ones, so outside use should be done carefully. Also, you'll have to reapply it after heavy rains, and it works most effectively in dry environments.

Make sure that the DE you purchase is food grade, with low crystalline silica content. Some DE sold as "insecticidal" may include food grade DE, but also contain other insecticidal agents, such as pyrethrins and a synergistic chemical to make it work faster.

Pyrethrins are "natural" pesticides made from pyrethrum (chrysanthemum flower extract). Even so, pyrethrins are listed as "Very toxic to cats" by the Natural Resources Defense Council. There are also synthetic versions of these chemicals.

For more on this, see this list of health hazards from flea and tick products.

As long as you buy food grade diatomaceous earth, you'll be good to go.

Is DE green? Well, that depends. There is some debate over just how eco-friendly DE is.

As a natural flea killer, it's much better than using poisonous chemicals. But, DE is obtained through a mining process. So although its use is advocated by some proponents of green lifestyles, there is the environmental impact of mining to consider.

You can buy food grade diatomaceous earth at Amazon.