Kevin Richardson Cuddles with Cubs and Gets Licks from a Lioness

Kevin Richardson is crazy - crazy about lions, and often gets up close and purrsonal with them. Yes, I know, lions don't purr. Watch as he visits with a mama lion and her cubs. 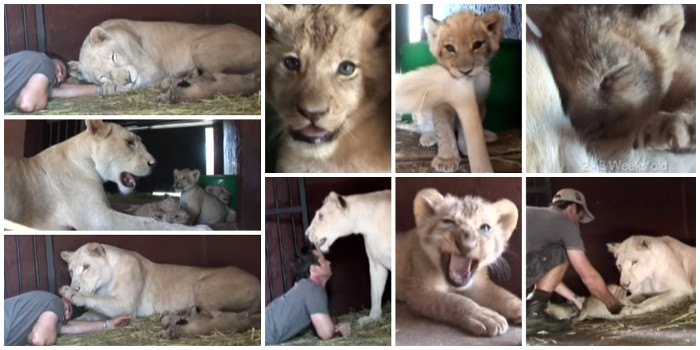 A self taught animal behaviorist, Richardson is the lion whisperer, and if you watch these videos, it's easy to see why that title fits him. Don't eat the camera, kitty!

What he's doing is highly dangerous, of course, but he makes it look so easy. While these aren't "wild" animals roaming the plains, one wrong move and it could be all over.

What he's doing is also controversial, and he is not without his critics. While a man getting "good morning hugs" from a lion raises awareness, some people have raised concerns about what he does and how he does it.

Richardson's mission, however, is to preserve these beautiful animals as a species. Regardless of whether his methods are good or bad, without some kind of change we are quickly wiping the big cat species off the planet.

If you're interested in learning more about Kevin Richardson and his mission, pick up his book, Part of the Pride: My Life Among the Big Cats of Africa.

So what do you think? Does Kevin Richardson snuggling with big cats and hyenas help or hurt his conservation cause?