Dealing With Hairballs In Cats

Hairballs in cats are a fact of life for house cats and their owners alike. That barbed tongue and all that grooming sends a ton of fur down the hatch.

Most of the time it's not an issue, but it can cause problems with the plumbing. That's often when the hacking and convulsing starts.

If the cat is successful in coughing up the hair ball, a gift is left for you on the floor, the couch, or your favorite chair. Most cat owners know very well that nasty cigar shaped present that says "I love you." 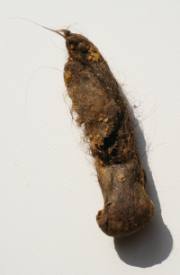 Unsuccessful attempts, on the other hand, result in either vomiting (with little to no hair in it), or just periodic bouts of hacking with nothing to show for it.

Sometimes hairballs in your cat's stomach can actually be bad enough to make your cat feel sick (or worse).

One of our reader's cats became withdrawn, and developed a litter box problem. After he hacked up a fur ball, she reported that he was back to his old self again.

If the cat can't get the fur up in a timely manner, it may move down the digestive tract.

Hairballs can become dangerous if they make their way into the intestines and bind things up. This can be life threatening.

Or, there can be just enough hair in the gut to cause chronic feline constipation, which can lead to serious bowel problems later.

In addition to the cigar shaped mass of fur itself, your cat may show signs of having a problem with hairballs. Frequent vomiting, hacking, coughing, and constipation may occur.

You may notice more hair in your cat's stool than usual. Your cat may also experience lethargy, depression, and a refusal to eat.

Many of these symptoms can be due to other causes as well. Chronic vomiting or lethargy, for example, may indicate serious illness (see these cat illness warning signs).

In the Fall, 2008 issue of Feline Wellness, Michelle Bernard, cat breeder and author of Raising Cats Naturally gave five solutions for prevention and treatment of hairballs in cats.

One of her suggestions is to use homeopathy. She says that excessive grooming or difficulty passing hairballs may indicate an overall lack of health. She suggests you work with a qualified homeopath to formulate a treatment plan.

Here's my take on the rest of the options she mentioned, along with some other recommendations from various sources.

Grooming - Cats spend a huge amount of time grooming. Cats with longer hair and/or thick undercoats will probably be more prone to problems with hairballs.

Some cats groom more than others, and some cats develop a habit of excessive grooming.

The more you help your cat get rid of that excess fur, the less fur that goes down the gut. With respect to hairballs in cats, grooming your cat is probably the greatest gift you can give your feline friend.

So, groom your cat as often as possible. Most cats, even reluctant ones, learn to love grooming sessions.

It's also a good time to do a mini-health check up.

Get yourself a Furminator and have at it!

Canned pumpkin - I've seen this recommendation a number of times, but I've never tried it and don't personally know anyone who has. To increase your cat's fiber intake, add a little bit of canned pumpkin (unspiced, unsweetened, unflavored) to a high quality canned cat food. Blended squash baby food is another idea that some have claimed success with.

Butter - I've also read that a half teaspoon of butter added to your cat's food a couple of times a week may be effective.

Change in diet - Either a raw meat diet, or a high quality canned wet food is recommended. This is in contrast to some of the commercial dry hair ball management formulas that often are high in fiber from grains. I have heard from more than one source that a wet canned food works much better at reducing problems with fur balls, as well as other digestive problems.

Encouraging exercise, including running, jumping, and anything that develops the abdominal muscles will help your cat's digestive system.

Get your cat Da Bird and have regular play sessions.

Hair ball management formula food - Hair ball formula diets are available. They often, however, contain large amounts of grains, and the rest of the food is sometimes of lower quality.

Commercial remedies - There are various formulas out there, most of which are designed to help pass things through the digestive tract. Some of these contain mineral oil, which can inhibit the absorption of nutrients, so be alert to that. Others may have some side effects, such as diarrhea, or shouldn't be used on cats with certain ailments, such as diabetes.

Topics Related To Hairballs In Cats