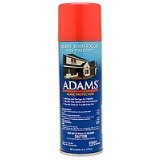 Flea bombs may be required for severe infestations. Some people find, that, after trying everything, they have to resort to the bomb.

This is sometimes a last ditch effort before calling in a professional exterminator.

After you've tried everything, you may find that you too, have to resort to the bomb (often referred to as foggers). Here are some things to keep in mind.

There are a few of things you should be aware of when using flea bombs.

If at all possible, I avoid using bombs. It's far better to use more natural means to control fleas on your pet and inside and outside the home if you can. But for those times where things are out of control, the bomb may be the thing that does the trick.