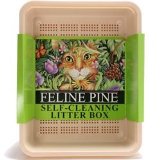 The Feline Pine litter box is a self cleaning model that uses an alternative, environmentally friendly litter and a unique design.

This box is not electronic, and it it is not truly fully self cleaning, but it can cut down on the maintenance and the amount of litter you use.

Let's talk cat litter (one of my favorite subjects).

In order to understand the benefits of using this box, we have to look at Feline Pine cat litter and how it works. In fact, the key to this box is the type of litter and the way it creates sawdust when your cat urinates.

Over the years, various materials have been used as cat litter. In the old days, it was sand and ash, until Edward Lowe came along and changed all that in the late 1940's with absorbent clay litter.

Most of the remaining 40 percent of the market is taken up with various brands of the traditional, non-clumping clay litter, similar to that developed by Edward Lowe (Lowe started the "Kitty Litter" brand and years later, Lowe's company would eventually create the Tidy Cats brand).

If you're doing the math, 40 percent and 60 percent add up to 100 percent. There are, however, some other cat litters that grab a small portion of the market. Environmental concerns, efforts to create superior odor control and reduce box maintenance tasks have all led to the development of alternative cat litters.

The Feline Pine litter goes into the box as pellets. As your cat urinates on the pellets, sawdust is created. This sawdust needs to be dealt with and replaced with more pellets over time. It's the sawdust for which this litter box has a solution.

The Feline Pine self cleaning litter box has an upper and lower tray. The sawdust that is created when your cat urinates on the pellets is removed from the upper box tray and sifted down into the lower tray.

Since only the sawdust is in the lower tray, only sawdust (and not the pellets) are thrown away, so the product lasts longer, saving on the overall cost of litter. Also, since your cat is not walking on the sawdust, it reduces tracking.

The manufacturer claims that with this system, the litter box never needs to be changed again. In other words, you simply keep adding pellets to the top tray, and empty the sawdust from the lower box. I would not be so optimistic.

You'll still need to clean the box periodically and change the litter out when you do. And, of course, you'll still have to regularly scoop out the solid waste.

You have several options with what to do with the sawdust. It can be used as mulch, composted, or thrown away.

Keep in mind many cats, however, like good old fashioned clay the best, since it resembles the loose, sandy soil they normally prefer to eliminate in.

In addition, some of the alternative cat litters, especially the pellet-type, seem to aggravate some cats because they are uncomfortable to those sensitive paws.

To the dismay of many gardeners, cats will often eliminate in garden topsoil. As discussed on the pages on cat repellent, putting mulch or other uncomfortable materials down will sometimes deter them. If your cat is deterred by mulch, this litter may not be the best option.

Other Topics Related to the Feline Pine Litter Box

Other manual and electronic self cleaning litter boxes