These Tiny Flea Infested Kittens Were Having Rough Lives, Until They Met this Crazy Cat Lady

The futures of these two flea and worm infested kittens from different litters were not looking very bright. Luckily for them, a self-professed Crazy Cat Lady came along and changed all that. 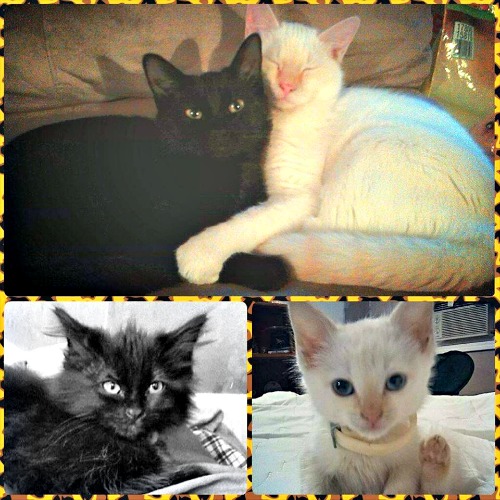 "Call me 'Crazy Cat Lady.' I'd like to tell you the story of the greatest friends I have ever had.

The black cat is my female cat, Salem. Poor Salem couldn't have been more than 5 weeks old when we found her on July 22, 2013.

When we found Salem, she was crossing a thankfully not busy four lane. Where we live, there are a lot of mountains and grass areas, and she happened to be strutting across both lanes on this particular rainy day." 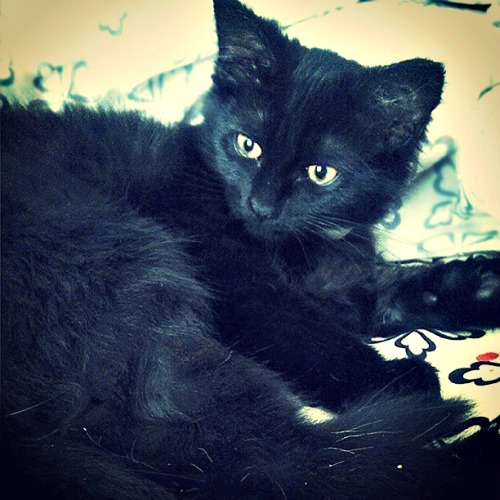 "I saw her just in time to slow down, and my fiancé suggested I pull over and we take her home. This little black haired beauty was terrified of everything around her. I ended up taking my flip flops off and chasing her down the median.

When I caught up to her, she stopped and hissed at me, and I just bent down, picked her up, and told her she was going to be okay. We took her home, got her some food and bathed her. She ran for a while, and hid behind everything for a few days. I remember it being so frustrating because she was so small.

To give you an idea as to how young she was, she didn't know what to do with food. It took her almost two days to get comfortable and eat and use the bathroom. She was litter box trained in less than two days, but also got worms.

I treated her with medication, and she cleared up in no time. She was infested with fleas, and her coat was so thick we had to give her two flea baths when she reached the right age.

Ever since then, Salem has been our wild one of the bunch. She's sweet, but she kind of keeps to her own. She's a very individual cat, and she loves adventuring around the house.

She hasn't been outside, except once when she got loose a few days ago. It scared her and she hid under the house for a few hours. Salem is a very beautiful and smart cat, and I love her with all of my heart. She's like a child to me." 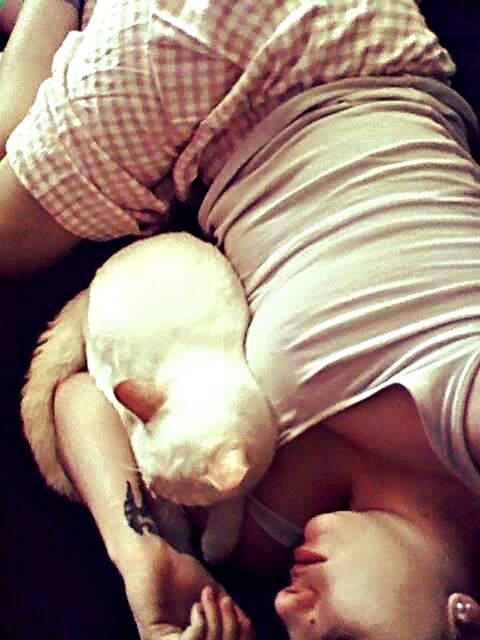 "The white cat you see is my male cat, Smeagol. He's also a rescue kitty. We saved him from a family who wasn't the best for him.

We got him when he was just weeks old (6 maybe), and in really bad shape. He was covered in fleas from being locked on the porch outside with several other cats. He had scrapes and bumps all over him where the children would throw him on the concrete and chase him down and trap him with a butterfly net.

He was really malnourished due to lack of milk/proper diet, etc. They had also rubbed lotion all over him to 'keep the fleas away.' When we brought him home, he also had to go through the flea and de-worming treatments.

He took to the food instantly (just some regular kitten-chow), and the litter box was also natural. We've had him for approximately 5 months, now. He's a strict indoor cat, no fleas, and fat as can be.

He has some trouble with the litter box every now and again, but other than that, he's my little buddy and cuddles with me all of the time. I couldn't imagine my life without him."