Who Is Chloe T. Kitteh?

Who is Chloe T. Kitteh? Chloe is our site mascot and spokeskitten here at Cat Lovers Only. If you've been following Chloe on Twitter, thanks!

Chloe is extremely opinionated and is not afraid to let you know where she stands. She's interested in many topics, including global warming, animal rights, and, most importantly, salmon. Of course, cheezburgers are always on the list as well.

She's always penning new thoughts, most of which she keeps to herself. She has several books in the works, which are barely rough drafts at this point, including:

"If Cats Had Thumbs" and "I Thought I Saw An Honest, Smart Politician."

Chloe is also working on a photo book of cats with tattoos, called "I Thought I Saw A Putty Tatt." Once finished, this book will serve as evidence of animal cruelty and, she hopes, will help to punish those humans who have tattooed their cats.

"I'm so hungry, I could eat a carp the size of Kylie Minogue." (from Twitter)

"About one-third of today's cat owners sleep with their felines." -Arden Moore "What's wrong with the rest of you?" (from Twitter)

Chloe would like to have a radio show and maybe her own TV show focusing on all kinds of topics, not just cats and animal rights. She sees herself as perhaps the feline Oprah, but with a bite to her.

Chloe obviously enjoys writing, and likes to put a different twist on many topics.

In addition to Chloe's other pursuits, Chloe likes to write short stories. One of them is a series, called "Kitten Impossible." 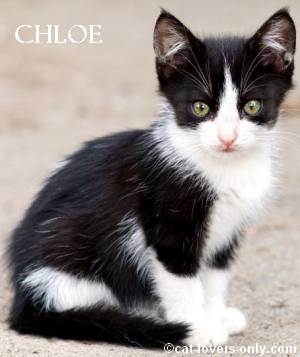 The main character, named Kitten, is always attempting something interesting, yet unlikely, or nearly or entirely impossible.

Unfortunately, Chloe can only seem to come up with ideas for the stories, and never really gets down to writing the stories fully. Perhaps one day she will.

Here are some examples:

"Kitten tries to make sense of what people are saying on Twitter."

Chloe participates in sleep studies often, but denies having narcolepsy. Although she loves salmon, she rarely admits to having an addiction to it.