A terrified cat took an unexpected plane ride at Club ULM 16-34, a flight school in Kourou, French Guiana, on the wing of a microlight aircraft.

She was safely returned to the ground after alerting a very surprised pilot to her presence. 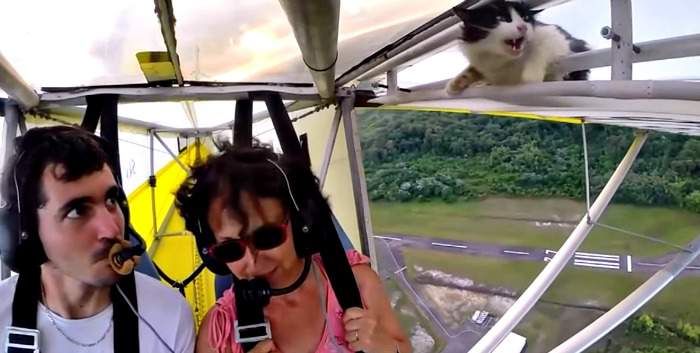 A very unhappy cat on the wing of a microlight aircraft

It's pretty amazing the cat was able to hang on for dear life, let alone crawl toward the people in the plane.

Luckily, they saw her, and she was able to hang on until the landing.

The video starts off smoothly enough, until the cat suddenly seems to appear out of nowhere on the wing. You can barely see some ears and the top of her head...

And then, she manages to crawl along the wing and make her presence known...

The cat may end up being named Stowaway after this. The video of the flight was posted by YouTube user Romain Jantot, who said...

"A standard flight until... I still don't know if it got in after the pre flight check or if I missed it. The cat is doing well, she is still our mascot."

A longer video of the flight is below...