What Should You Know
about the Cat Hookworm? 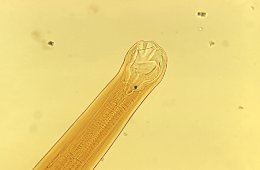 The cat hookworm is yet another type of intestinal parasite that cats and their owners may have to deal with at some point.

They can cause blood loss, anemia, intestinal distress and even death in some cases.

On the other hand, if your kitty has a mild infestation, there may be no symptoms at all.

That's one of the reasons it's important to have your cat checked for worms at least once per year.

As the name implies, they hook themselves onto the wall of your cat's intestine with "hook-like mouth parts."

They then begin to suck blood from the intestine of your cat.

Yes, these are the blood sucking vampires of the parasite world, draining your kitty of blood, causing anemia (a reduced number of red blood cells).

There are several different types of these nasty beasts that may infect your cat.

Some hookworms are species specific, and some cross the species boundary, affecting not only cats, but humans, dogs and other animals.

There are at least four types of hookworm that may infect your cat...

In domestic cats, the two most common infections are caused by Ancylostoma tubaeforme and Ancylostoma braziliense (which may also infect dogs and foxes).

Cats may also become infected with Uncinaria stenocephala, although this is typically more in colder climates than the other two.

And, it is also possible that a cat may become infected with the dog hookworm, Ancylostoma caninum.

Hookworms are relatively small creatures. The smallest ones are considered barely visible to the naked eye.

Depending upon which species we're talking about, adult worms are about 2 - 18 mm long. Their eggs, which are shed by infected cats in the stool, cannot be seen without the aid of a microscope.

How does your cat get it?

Like some other cat intestinal parasites, such as roundworm, your cat can become infected with feline hookworms in more than one way. And, just like other cat parasites, the likelihood of infection can be greatly reduced by keeping your cat indoors.

How is the worm transmitted? Understanding the life cycle of these beasts will help you to understand how it's passed from cat to cat (or other animal) and the steps you need to take to prevent transmission.

Let's start from the inside out...

Under the right environmental conditions of temperature and moisture, the eggs hatch and develop into larvae (immature worms). According to some sources, the larvae can exist in the soil and remain infective for months.

There are various reports from different references indicating the time frame within which the larvae may become infective.

The Centers for Disease Control states that if conditions are right, eggs can develop into infective stage larvae in as few as five days.

Regardless of the time frame, proper litter box maintenance, hygiene practices and having your cat tested will help prevent infestations. Scoop and dispose of litter at least daily.

You will note that in contrast to some parasites, hookworms have a direct life cycle. In other words, they don't necessarily need a host in order to be transmitted.

A cat will become infected either by direct ingestion, or when the larvae penetrate the skin (usually the feet).

Sometimes a transport host (such as a a rodent) can be involved. When infection starts by skin penetration, the larvae will migrate via the circulatory system to the lungs. They will then make their way to the throat, where they are swallowed.

Once in the intestine, they may mature and begin producing eggs, and the cycle begins again.

Prenatal infection (infection prior to birth through transplacental blood flow), may be a significant problem in dogs, but has not been shown to occur in kittens.

Some references report that kittens can become infected as well through ingesting the milk of an infected queen (transmammary), but others, including the Companion Animal Parasite Council state that this is not the case.

The bottom line? If your cat walks or lies down on infected ground or flooring, eats worm larvae, or eats a small animal or cockroach that is infected with the worm, s/he can become infected.

Now that you know how your cat can become infected, you can easily see how to reduce the risk...

Is your cat at risk?

In general, cats tend to suffer relatively few hookworm infections when compared with dogs. As with most parasites, though, environment plays a role as does hygiene.

Infections are more common in warm, moist environments, which is more ideal for the organism's growth. In locations such as shelters, overcrowding and poor sanitation may contribute to the spread of infection, or re-infection.

Cats that are allowed to hunt or roam are at higher risk for infection. So, indoor cats are less likely to become infected than outdoor kitties. Obviously, if you have an indoor/outdoor cat, or if you bring strange cats into your home, your risk goes up for all cats in the house.

Keep your cat indoors and limit exposure to strange cats and other animals. Quarantine any new animals brought into the the house, and have all animals checked for worms at least once per year.

An infected cat can suffer blood loss from ingestion by the hookworm, as well as continued bleeding into the bowel. As opposed to roundworms, which feed off of free nutrients in the cat's intestine, feline hookworms feed off the blood of the host cat.

This is accomplished by anchoring to intestinal tissue and sucking blood. In order to prevent the blood from clotting at the feeding site, they inject an anti-coagulant. If the hookworm moves its feeding location, the old location may continue to bleed into the bowel.

The blood-loss anemia caused by hookworms is usually a more serious problem in kittens and debilitated cats than otherwise healthy adults. In severe cases a blood transfusion may be required (this is rare).

In the most severe cases, death is a possible outcome as large numbers of hookworms (high worm-load) create massive loss of blood.

You may suspect hookworms in your cat if any of the following signs and symptoms are present:

Since some cats may be symptomless and hookworm eggs are too small to be seen with the naked eye, we must rely on testing by a veterinarian.

Testing for worms and parasites is routinely done at annual vet visits, which involves a fecal examination.

In multi-cat households, it's very likely that if one cat is infested with worms, the others will be as well. It should also be noted that a cat may be infested but eggs may not yet be visible in the stool.

Treatment for hookworm is relatively safe, simple, and fairly inexpensive. At least two treatments of de-worming medication are needed, typically given at 2-3 week intervals. Kittens are often treated for common worms during their early vet visits, which is when they also get their kitten vaccination series.

Hookworm is a zoonotic disease (can be transmitted to humans from animals), but there are also hookworms that prefer humans. Below are some resources to check out so that you can better protect yourself.