The American Curl: Is this Unique Cat the Right Breed for You?

The first time you see an American Curl, you may think that the cat has a deformity! If you want to own a cat who has a unique appearance and a quiet, unassuming disposition, then this breed deserves a close look.

Cats don't usually have ears that curve back toward the back of their heads, but this one does.

The American Curl actually has varying degrees of curl to the ears, from ears that barely tip back to ears that curve so far back that they form a crescent shape.

Only cats with ears that form a crescent curve are suitable for showing, but all American Curls make delightful pets.

This breed was developed in the early nineteen eighties from one stray cat that a California cat lover adopted. That cat, named Shulamith, had two kittens who also displayed the curled ears, and a new breed was born.

Surprisingly enough, all kittens are born with ears that look completely normal. 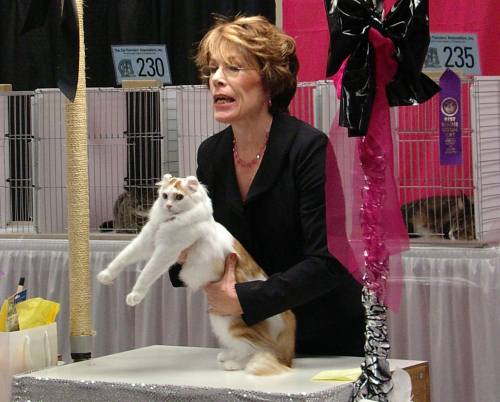 An American Curl being judged at cat show.

The above picture shows an American Curl being examined by Judge Diana Doernberg at the 2006 CFA-Iams Cat Championship, Madison Square Garden.

When the kittens are about ten days old, their ears begin to curl. At about four months old, the ears develop their final position.

The Curl is known for being a quiet, sweet natured breed and makes an ideal apartment pet. This cat is often a bit on the inactive side and is content to soak up sun on a windowsill for a large portion of the day.

While the Curl does not dislike other cats or people, this breed is content to amuse itself and will not usually pine for other cats to keep it company. The ability to entertain herself makes this breed a perfect choice for people who work long hours but still want to come home to a loving pet.

Along with most other cat breeds recognized by the Cat Fancier's Association, the Curl is classified as a part of the Championship Class. This breed has an elegant medium build, and tends to be a bit on the small side. The average weight range is between seven and eleven pounds.

This breed's tail is as long as its body and gracefully tapers at the tip. The cat's head should be rounded and the eyes are more oval shaped than those of many cat breeds.

The Curl's legs are somewhat bowed and her body is not as muscular and stocky as many other breeds. You can find longhair or shorthair Curls, although the dominant longhair is much more prevalent. Two shorthairs will still often produce one or two longhair kittens.

Due to the care with which the breed was developed, these tend to be very healthy cats. The originators of this breed were careful to out cross the original litters of the Curl with straight eared cats that had similar body types to create a large, healthy gene pool of cats that carried the Curl gene before they tried to breed any Curls to each other.

While shorthair Curls need very little grooming, you should be prepared to brush your longhair Curl at least once a week to prevent the coat from matting. Since the undercoat is very sparse, you should not need to worry about more frequent grooming.

If you want to own a cat who has a unique appearance and a quiet, unassuming disposition, then you may want to take a close look at the good natured American Curl.