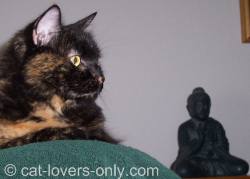 Here is a collection of myths about cats. Some of these have a history of hundreds of years, while others are quite new.

As time goes on, of course, these tales often change, and their origins forgotten.

This means that not only do some of these have multiple stories surrounding them, you may have different versions of their history.

These have often been republished as authentic in various publications over the years.

Over many years, the cat has played many roles. Felines have been considered omens of good fortune, as well as symbols of bad luck, too.

The cat went from being protector of the grain supply, to being worshiped as a god, and on to becoming a symbol of witches and the devil. Some cats were put to death just based on their color.

Today in the US, cats are more popular as pets than dogs. As popular and well-loved as they are, urban legends, misunderstandings, myths about cats still exist.