A Boy Named Lucy at the Barking Cat

They carry, among other things premium quality cat food from companies like PetGuard, Solid Gold, Wellness, and Wysong. 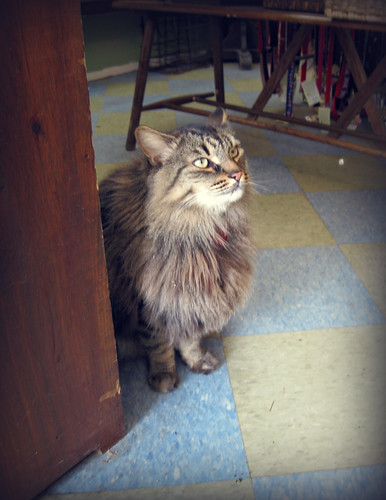 I've never been there, but the shop gets good reviews from what I've seen, and has historic charm. It's also famous for being a favorite resting spot in the busy day of a wandering cat named Lucy.

Lucy is a large Maine Coon cat and, believe it or not, a boy.

This popular kitty has gotten some media attention, like this Salem News story about Lucy

Lucy's favorite spot is The Barking Cat, a shop on Essex Street that caters to dog and cat owners. Owner Jeff McKee said Lucy stops by almost every day. "He likes to talk to people and get the attention," McKee said. "He just hangs out. He's very sweet and seems to like everybody."

In early April of 2011, Lucy was catnapped! Thanks to some tipsters, and a local police officer who knows him, he was recovered, unharmed. Apparently, an elderly man was seen carrying him down the street, and took him home!

Update: Sadly, Salem News reported that Lucy passed away in his human's lap while on the way to the vet in early December of 2012. He died from a blood clot.

Lucy will live on in our hearts and minds as the cat who got around and spent time at the pet shop with the funny name.

To my knowledge, Lucy was never known to bark.

In honor of Lucy, and the Pet Emporium with the funny name, however, here are some videos of cats that bark (or whose owners claim so), courtesy of YouTube.

This cat is doing just about the best impression of a Chihuahua I've heard...

Sugar really does sound almost like she's barking like a dog. Move to about 1:40 in the video where she starts in.

This kitty "barks" at bubbles.

By the way, bubbles make excellent homemade cat toys and many cats cannot resist them. Just make sure you use non-toxic bubbles.

Or, you can buy catnip bubbles, which some cats seem to love (some don't).

To me, the cat above actually sounds like it's doing a variation of the chattering sound that many cats make when they're observing prey they can't get to, like a bird outside the window.

So it's not as "bark-like" as the others.

You can read descriptions of various feline sounds along with some links to some audio and video of more cat sounds here.

Does your cat go "beyond the meow" and make unusual sounds? Let me know in the comments!