I kissed a dolphin

by Kurt (Admin)
(Where cat and dolphins play)

I kissed a dolphin and I liked it, and apparently so did the cat in this video. You never know what's going to happen when animals get together, but this dolphin and this cat seem to be getting along swimmingly at this particular moment.

Update: Unfortunately, the original video for this, "Cat and Dolphins playing together" (http://youtu.be/rynvewVe21Y) is now marked private so you can't view it any longer. So, I've embedded the version below, which appears to have the full video and audio:

"Cats and the dolphins playing"

The above video of a cat playing with a dolphin has certainly been getting a lot of attention on the Internet recently, but don't try this at home.

This video has been uploaded to Youtube more than once, giving rise to some speculation and controversy. Curious like a cat, I decided to look into it. Here's some of what I've dug up on it...

Since Ellen DeGeneres tweeted about it, the video got some extra special attention. Using Twitter, as I suppose all good talk show hosts should, she announced that you could watch the vid on the Ellen Show the next day. 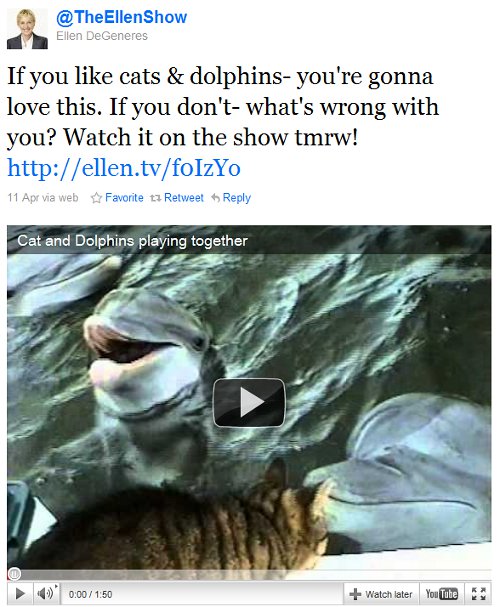 Ellen put the video to music, and titled it "Water Won't Keep These Two Apart!".

This video also got attention of a different kind. Sometimes the comments on Youtube are more interesting than the videos.

A few comments referred to the fact that at one point, the cat appears to walk on water, which led at least a couple of people to think that something was fishy.

Was the video faked? In fact, there's a small, dark platform the cat is placing his front paws on.

A bunch of speculation and rumor started about the video, with questions on where this took place, and whether or not these are wild dolphins. This raises some potential legal and ethical concerns with the environmentally aware. In the US, for example, there are laws protecting marine mammals from harassment.

The Marine Mammal Protection Act (MMPA) of 1972 covers US waters or US citizens in other locations. If the interaction here is considered "harassment" then that could be a bit of a problem.

But, if you watch closely, and listen to the audio, you can clearly hear the names "Arthur" and "Thunder" being used to refer to the cat and one of the dolphins. At one point someone says "I think Arthur wants a kiss."

There are other clues that these are captive dolphins at a park, and the cat also appears to be very used to being splashed.

At Ellen's website, there's a clue to the authenticity of the video. A comment posted by "Jane Ferguson" reads "My Husband Dan shot this footage about 12 years ago. The cat's name is Arthur and the Dolphin is Thunder"

Apparently, Jane is known on Youtube as "MsTigervideo" as she also posted similar information as comments on some of the other uploads of the video that I've seen on Youtube.

To summarize her comments (her YT channel seems to be gone now), she said that she and her husband Dan are staff photographers at Theater of the Sea, a marine park in Islamorada Florida.

They had a colony of cats there and the cats were looked after and seen by veterinarians. Arthur the cat and Thunder the dolphin used to play together often. She said the other dolphins in the video are named "Sherry and I think Bubbles."

It's been suggested that "Ms Tiger" should upload the video to Youtube and get the others bounced.

Note: Although as I mentioned there are other versions on Youtube, the above video (the original, now private) is the version that Ellen tweeted, and the one the Islamorada, Florida Facebook page referenced as well, so I'm going with that.

On that Facebook page, they state that the video footage was captured in 1988, and the dolphins were Bubbles and Shiloh, but obviously Thunder was the dolphin giving nose bumps to the cat. Also, according to MsTigervideo, the footage was shot 12 years ago, and the Youtube description currently says "1997" which is much closer to that number.

A portion of the video was apparently used in what appears to be a non-English version of a "Funniest Home Videos" type show...

It occurred to me that perhaps the cat, Arthur, was giving a nod to pop star Katy Perry and her song lyrics, "I kissed a girl and I liked it" or more probably Katy Perry's cat, Kitty Purry.

I'm guessing the closest that Kitty Purry has ever gotten to a dolphin, though, would be hanging out in this over-the-top shark cat bed. Now that's a bed befitting a celebrity pet if there ever was one. 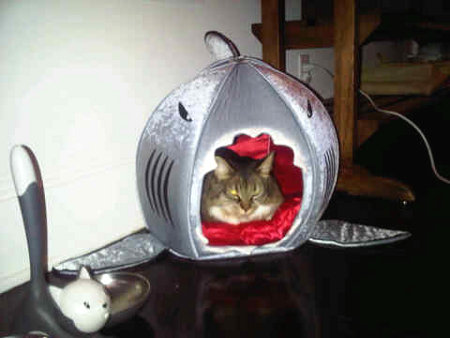 It's been a few years since I kissed a dolphin myself, but I'll never forget it. I'll also never forget how powerful they are and how much danger a cat would be in to come that close if the dolphin happened to be having a bad day.

Join in and write your own page! It's easy to do. How? Simply click here to return to Funny Cat Videos.