by Matt
(Baltimore, MD US) Editor's note: There's something about creative thinker types and cats. Scientists, writers, and artists seem to be drawn to them.

Add to that list, Matt Snow. Matt is the designer for Ex-Boyfriend, creating "unique, wearable pop art that invites conversation."

He started the venture when he was still in college with "flirtastic" phrases as t-shirt designs. 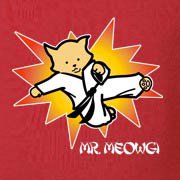 Matt holds a Bachelor of Science in graphic design from The Art Institute of Pittsburgh, so he isn't just pawin' at it. I, on the other hand, can't draw a stick figure.

He's got some clever designs, like Mr. Meowgi as mentioned, and cat stuff and non-cat stuff for men, women and children including babies.

You'll find some nods to the LOLcat meme frenzy (may it live on forever) like Ceiling Cat and Basement Cat, and a whole bunch more.

There's even a shirt with a goat on it. You don't see that every day. 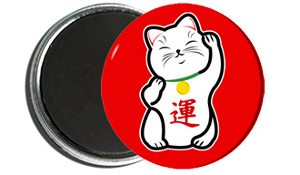 Besides being the founder and creative genius behind the curtain, Matt is a cat lover who rescues stray animals and fosters cats.

He donates a portion of the profits generated by Ex-Boyfriend to local animal rescue organizations. Very cool!

Speaking of donations, Matt does an annual spring fundraiser. April is Prevention of Cruelty to Animals Month, so that's cause for celebration!

Through April 15, the Maryland SPCA will receive 100 percent of the revenue from the sale of magnets or key chain bottle openers.

Below is a never-before-seen picture of Matt trying to absorb the creative cat plasma energy from Oliver so that he can come up with some new designs... 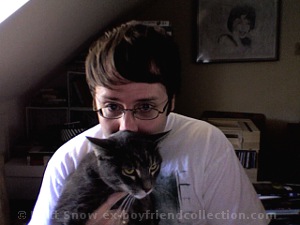 Oliver appears to have that semi-closed eyed contented look that says "all of my designs will be world famous and all your tuna are belong to me!" but Bigby seems uninterested in Oliver's self-absorbed glow. "I'd rather be chasing mice."

I think these cats are onto something, though. So, the next time you want to get a conversation started, show up wearing a t-shirt from the Ex-Boyfriend Collection.

Matt was nice enough to let me use some photos to add to his page, but I still couldn't resist embarrassing the man totally and completely by including this video. (Matt -- you made the video and shared it!)

I'd like to see Matt expand his cat related line up. So, what do you think? Would you like to see more cat apparel? Let us know in the comments!

Join in and write your own page! It's easy to do. How? Simply click here to return to Cat Themed Gifts.