My husband and I got Sophia when she was only 2 weeks old. She could barely walk and we were watching The Walking Dead and the little girl becomes a zombie so we decided to name her after the girl.

Editor's note: Thank you, Brittany, for adding to our list of names. And a big thank you for taking in such a young cat and caring for her. That must have been a lot of work!

According to Behind the Name, Sophia is of Greek origin and means wisdom.

There are many variants, including Sofia, Sophie, and Zofia. Quite a few famous people in history have been named Sophia or some variant of the name.

These include European royalty of times past, and in recent history, a number of actresses. Since many cat owners like to name their cats after famous people, I've listed a few here for inspiration:

Sophia Bush from One Tree Hill and of course, the iconic movie actress Sophia Loren. 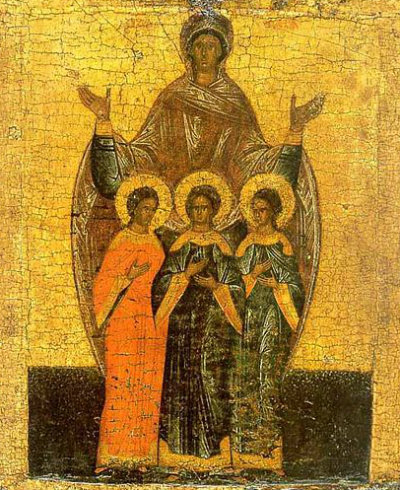 Sophia the Martyr with her three
daughters: Faith, Hope and Charity

Inside the Hagia Sophia, former cathedral
and mosque, in Istanbul, Turkey

Photo credits: Sophia the Martyr and Hagia Sophia / CC by 3.0