I have a 4 year old male kitty named Chopper. There was a young man giving away kittens in front of a grocery store when I got him. He was much younger than what the guy said so I ended up having to bottle feed him for a couple of weeks. I also had to train him to use the litter box and such. So needless to say he is my little baby. Well, he's had a box aversion for a while now and we've ruled out any medical issues. He is a pretty high strung cat and having 3 kids in the house doesn't help his disposition much. He has a preference for clothes lying around on the floor, mainly my son's, and will occasionally "go" in my daughter's room.

So after changing litter, changing boxes, changing location to be more desirable and having a "talk" with my kids about behavior around Chopper, I think we're finally on the right path to getting him back into the box. My whole point to sharing my story is to say thank you for this website and this blog. I was feeling so very alone and didn't know how not only to solve my problem but make my cat a much happier kitty. I didn't want to give him away and felt I owed him exhausting every possible avenue for a resolution. My husband has been very supportive although is not amused by Chopper's "antics". So as I said, I think we are on the road to success. I am trying to stay consistent and hopefully everything will work out. But thanks again to everyone's stories, they are so very helpful and supportive.

Thanks for contributing to the site and I'm sure your words of encouragement will help others as well. Litter box aversion in its various forms is extremely common and so many cats end up in shelters because of it.

If Chopper's stress level is high, then you might want to try Feliway to calm him. It doesn't work on all cats, but it has been known to help. Feliway

is a synthetic cat cheek pheromone that you can spray around the house, or use in the diffuser just like you would an air freshener. I have no personal experience with this product, but I hear it can help.

Thanks for sharing your story and being a good cat parent! 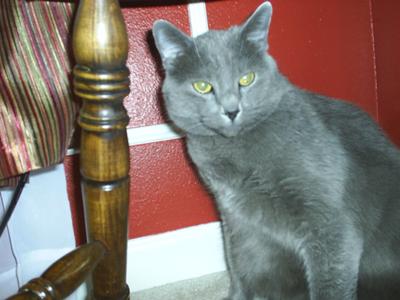